The primary adult data in this report come from a Pew Internet Project survey conducted from April 29 to May 30, 2010. The most current teen data reported here is from a separate Pew Internet survey of teens and their parents conducted from June 26 to September 24, 2009. Data points for some activities, however, come from earlier surveys, as shown by the following table. 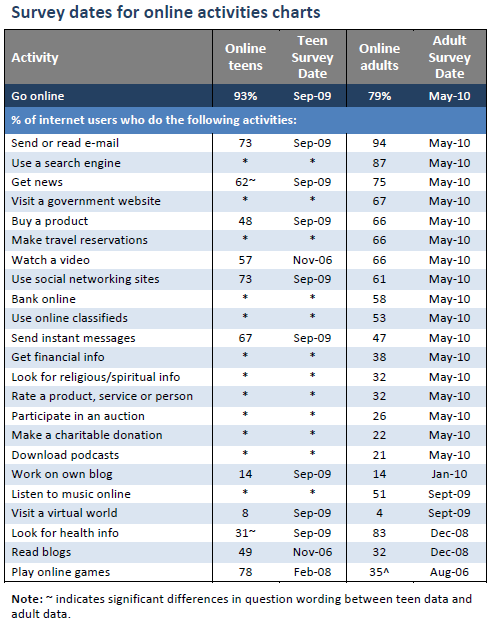 Surveys of teens ages 12-17 and adults age 18 and older are conducted in separate surveys, as outlined in the following sections. In general, activities listed for both teens and adults have only minor differences between the question wording between the different surveys. However, for the following questions, differences in question wording may make it more difficult to directly compare the results:

For more information about all of the questions on both teen and adult surveys, as well as other details about wording and methodology, please see the individual toplines for each survey. The relevant portions of these surveys may be downloaded as a PDF here, or in the “Explore survey questions” section (“Download”) on the report overview page.

The most current teens data in this study is based on the 2009 Parent-Teen Cell Phone Survey which obtained telephone interviews with a nationally representative sample of 800 teens age 12-to-17 years-old and their parents living in the continental United States and on 9 focus groups conducted in 4 U.S. cities in June and October 2009 with teens between the ages of 12 and 18. The survey was conducted by Princeton Survey Research Associates International. The interviews were done in English by Princeton Data Source, LLC from June 26 to September 24, 2009. Statistical results are weighted to correct known demographic discrepancies. For more information about the sample of 12-17-year-olds, please see the Methodology section of the “Teens and Mobile Phones” report (2010). The full data set is available at https://www.pewresearch.org/internet/Shared-Content/Data-Sets/2009/September-2009-Teens-and-Mobile.aspx.

The Parent and Teen Survey on Gaming and Civic Engagement was conducted from November 1, 2007, to February 5, 2008. The margin of sampling error for results based on teen internet users is ±3%. The full data set is available at https://www.pewresearch.org/internet/Shared-Content/Data-Sets/2008/February-2008–Teen-Gaming-and-Civic-Engagement.aspx.

The Parent & Teen Survey on Writing was conducted from September 19 to November 16, 2007. The margin of sampling error for results based on teen internet users is ±5%. The full data set is available at https://www.pewresearch.org/internet/Shared-Content/Data-Sets/2007/November-2007–Teens-and-Writing.aspx.

The Parents & Teens 2006 Survey was conducted from October 23 to November 19, 2006. The margin of sampling error for results based on teen internet users is ±4%. The full data set is available at https://www.pewresearch.org/internet/Shared-Content/Data-Sets/2006/November-2006–Parents-and-Teens.aspx

The Parents & Teens 2004 was conducted from October 26 to November 28, 2004. The margin of sampling error for results based on teen internet users is ±4%. The full data set is available at https://www.pewresearch.org/internet/Shared-Content/Data-Sets/2004/Teens–Parents-2004.aspx. 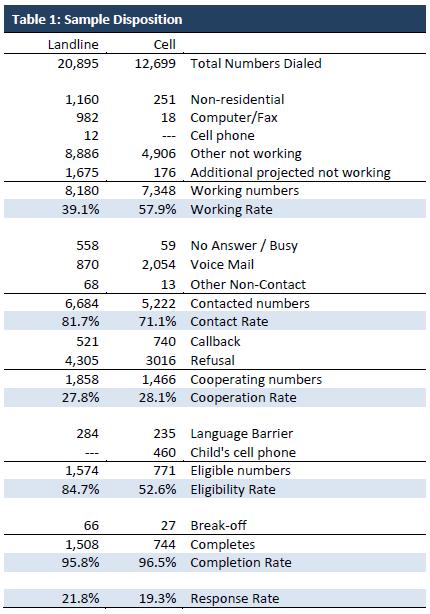 The full data set is available at https://www.pewresearch.org/internet/Shared-Content/Data-Sets/2010/May-2010–Cell-Phones.aspx.