Beyond its role as an indispensable communications hub, internet access connects users to reams of vital information, necessary for life management, health and civic engagement. The section below explores the intersection of teen and adult data over time on health information searches, news-seeking behaviors and online purchasing.

Teens also use the internet to look for information on health topics that are hard to talk about, like drug use, sexual health or depression. A bit more than one in six (17%) internet-using teens look online for information about sensitive health topics, statistically equivalent to the 22% who reported such searches in 2004. 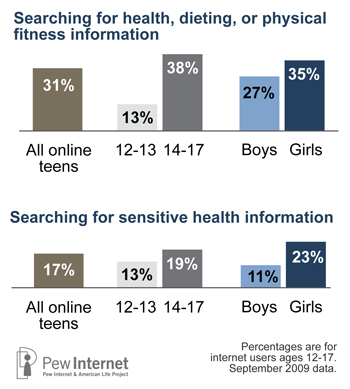 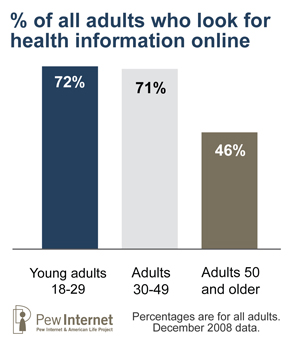 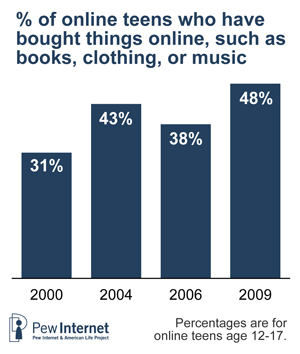 In both 2000 and 2009, teens living in households with higher incomes and education levels were consistently more likely to buy things online. The most striking differences between 2000 and today relate to gender. Older teens were and are more likely to buy online. However, older boys were the most likely online purchasers in 2000, while older girls lead the trend in 2009.

As one would expect, adults purchase goods online at a much higher rate than teens.  As of April 2009, three in four online adults (75%) report purchasing a product online such as books, music, toys or clothing.  That figure has increased at a fairly steady rate since Pew Internet first began asking this question in March 2000. At that time, about half of all online adults (48%) had ever purchased a product online. 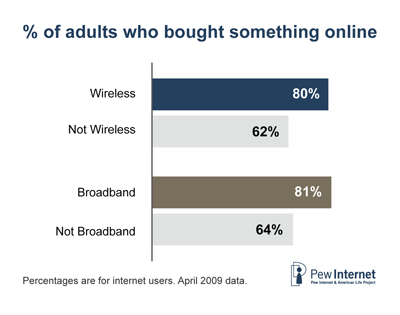 About two-thirds (62%) of internet-using teens consume online news about current events and politics. These numbers have remained roughly the same since 2000, except for spikes around mid-term and general elections in our November 2004 and November 2006 studies, when news consumption rose to 76% and 77% of online teens, respectively.  Older teens are more likely to visit sites for news or political information; 68% of online teens ages 14-17 visited online news sites, while just about half (49%) of 12-13 year olds said the same. There are no gender differences in whether teens visit online news sites. 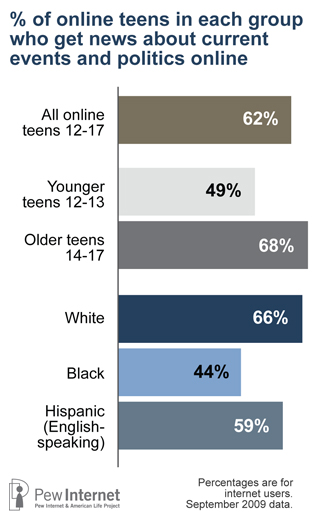 White teens and teens from families with higher income and education levels are more likely to report visiting sites for online news or political information. Two-thirds of online white teens (66%) say they have gone online to get news or information about current events or politics, while 44% of black teens and 59% of English-speaking Hispanic teens have done the same. Teens whose parents have a college degree or earn more than $75,000 annually are more likely than teens whose parents have a high school diploma or earn less than $50,000 in household income to seek out online information about politics or current events.

Previous Pew Internet studies have shown similar findings for online news use and household income and education and age. However, previous research did not show any racial or ethnic difference in online news use. 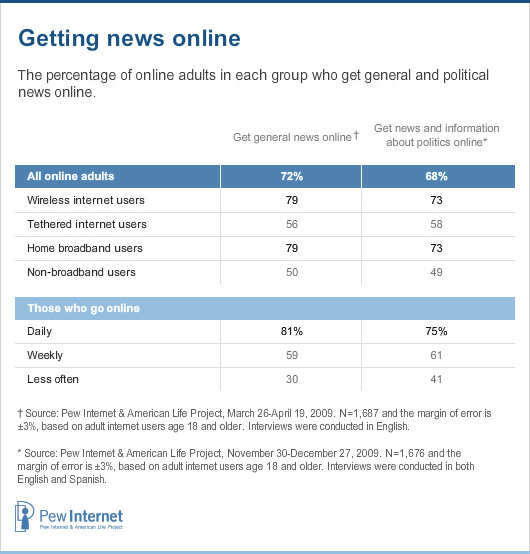 Next: Acknowledgements and Methodology
← Prev Page
Page1Page2Page3Page4Page5You are reading page6Page7
Next Page →