Recent Pew Internet reports have noted that internet connectivity is increasingly moving off the desktop and into the mobile and wireless environment, particularly for specific demographic groups.6 Understanding an individual’s technological environment is now a vital clue in understanding how that person uses the internet, connects with others and accesses information. Among teens, the average person owns 3.5 gadgets out the five we queried in our survey: cell phones, mp3 players, computers, game consoles and portable gaming devices. In September 2009, adults were asked about seven gadgets: cell phones, laptops and desktops, mp3 players, gaming devices and ebook readers. Out of a possible seven gadgets, adults owned an average of just under 3 gadgets. Young adults ages 18-29 average nearly 4 gadgets while adults ages 30 to 64 average 3 gadgets. And adults 65 and older on average own roughly 1.5 gadgets out of the 7.

Cell phones: The majority of growth in teen cell phone ownership is among younger teenagers

Majority of growth in teen cell phone ownership is among younger teenagers.

Some 75% of American teens ages 12-17 have a cell phone. Since 2004, age has consistently been one of the most important factors in predicting cell phone use. Younger teens, particularly 12 year olds, are less likely than other teens to have a cell phone. 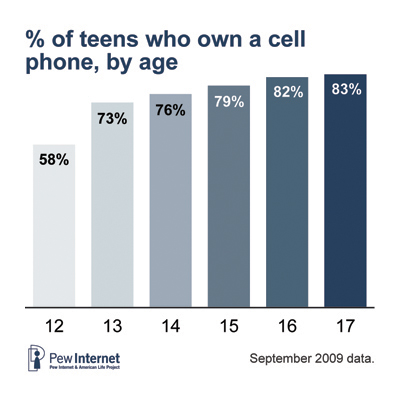 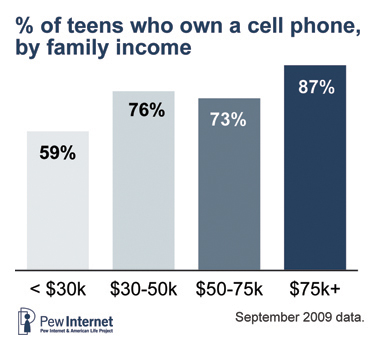 Cell phones are nearly ubiquitous in the lives of teens today, with ownership cutting across demographic groups. Beyond age, there are few differences in cell phone ownership between groups of teens. Boys and girls are just as likely to have a phone, though they do not always use it in the same way. There are no differences by race or ethnicity in phone ownership by teens. Socioeconomic status is one area where cell phone ownership rates vary, with teens from lower income families less likely to own a mobile phone. More than half (59%) of teens in households earning less than $30,000 annually have a cell phone, while more than three quarters of teens from wealthier families own one.

By way of comparison, as of December 2009, 83 percent of adults owned a cell phone (or Blackberry, iPhone or other device that is also a cell phone). This is an 18 percentage point increase since Pew Internet began tracking cell ownership in November of 2004; at that time, roughly two-thirds of adults (65%) owned a cell phone.

Adults younger than age 30 are more likely than those age 30 and older to own a cell phone—93% of young adults own cell phones compared with 80% of their older counterparts. Cell ownership drops off after age 50: 82% of those ages 50-64 own a cell phone, and 57% of those 65 and older own one. 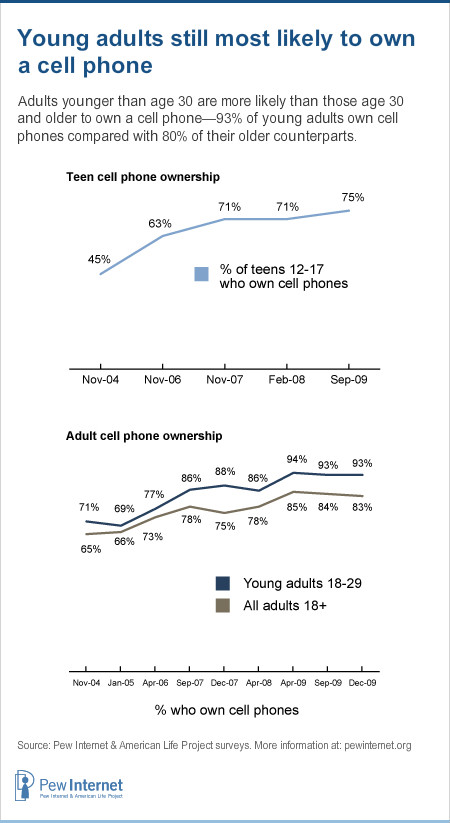 Computers: Laptops have overtaken desktops as the computer of choice for adults under 30

Nearly seven in ten (69%) teens ages 12-17 have a computer. Teens from wealthier families earning more than $75,000 a year are slightly more likely (74%) than less well-off teens to personally have a desktop or laptop computer. Older teens are also more likely to report owning a desktop or laptop; 73% of 14-17 year olds have a computer while 60% of 12 and 13 year olds do.

Laptops have overtaken desktops as the computer of choice for adults under 30. 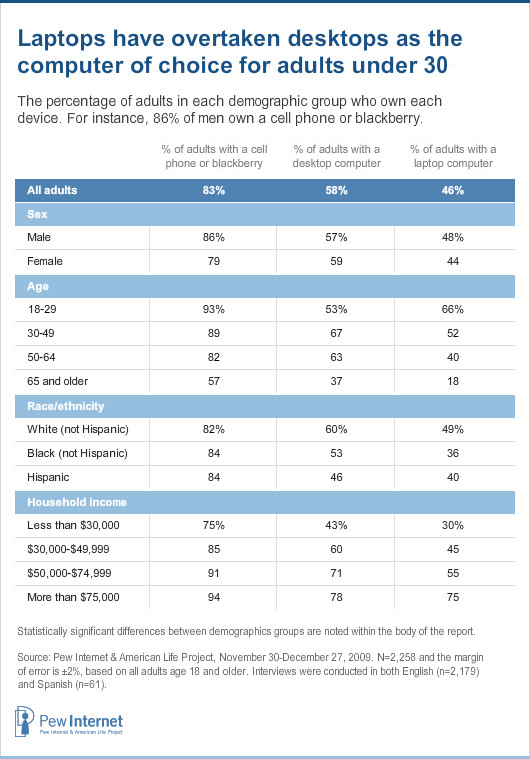 Music and E-Books: Young adults & teens are more likely to have an mp3 player than other adults.

Nearly four in five teens (79%) have an iPod or other mp3 player. Ownership of music players cuts across most demographic and age groups, with all groups just about as likely to own an mp3 player as another. The exceptions to this are parent’s educational attainment and family income. Unsurprisingly, as family income and education rises, so does the likelihood of a teen owning an mp3 player or iPod.

Young adults & teens are more likely to have an mp3 player than other adults.

In September 2009, Pew Internet asked adults about a larger number of gadgets: computers, mp3 players, game consoles, portable gaming devices, and e-book readers. Among these different gadgets, mp3 players are most popular with adults (43% own one), while just 3% of adults own an e-book reader. 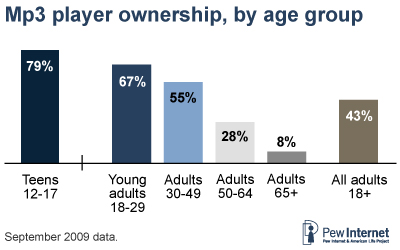 Mp3 players are especially popular with young adults. With numbers that match teens, fully three-quarters of 18-24 year-olds own an mp3 player; that compares with slightly more than half of 25-29 year-olds (56%) and 30-49 year-olds (55%) and just one fifth of adults age 50 or older (20%). As with other gadgets, mp3 ownership is positively correlated with educational attainment and income.

Ownership of mp3 players by adults has risen steadily since the question was first asked in January 2005, when just 11% of adults owned a digital music player.  Among teens, the percentage of teens with an mp3 player has also increased significantly, from 51% of teens in November 2006 to nearly 80% today. 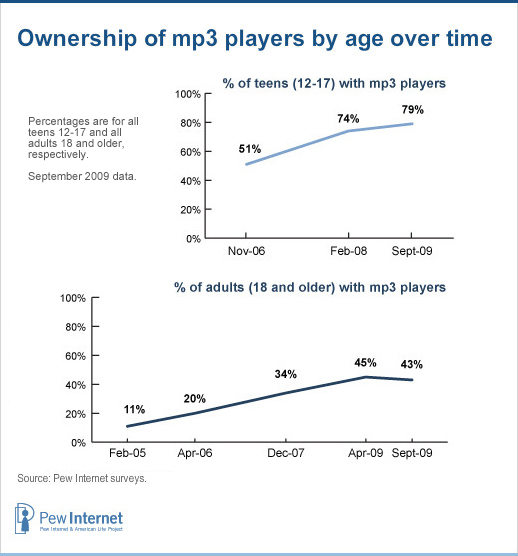 Gaming devices: Adults 30 and older are much less likely to own a game console than teens or young adults 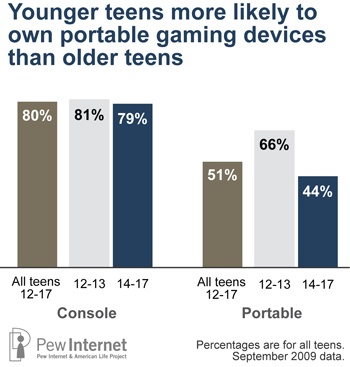 Adults 30 and older are much less likely to own a game console than teens or young adults. 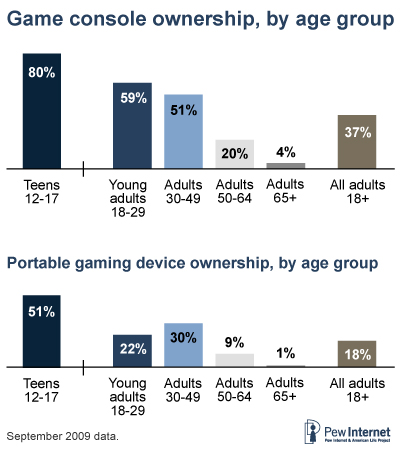 Access to the internet is changing. Teens and adults no longer access the internet solely from a computer or laptop. They now go online via cell phones, game consoles and portable gaming devices in addition to their home desktop or laptop computer. 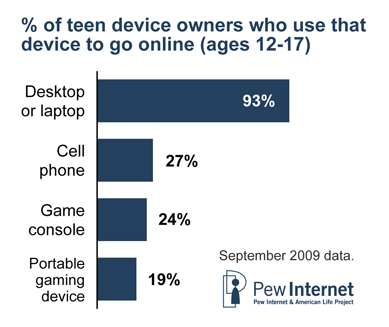 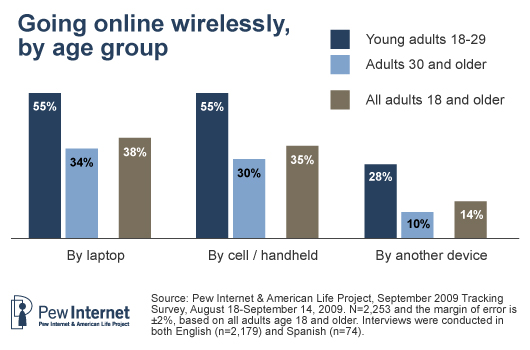 Among internet users, white adults are less likely than both African Americans and Hispanics to use the internet wirelessly. African Americans are the most active users of the mobile internet, and their use is growing at a faster pace than mobile internet use among whites or Hispanics.  While African-Americans are less likely than whites to use laptops to access the internet, they are more likely to use other mobile devices such as cell phones. Half of all African-American adults (48%) have used their cell phone to access the internet, compared with 40% of Hispanic adults and just 31% of white adults.

Men, and adults with high income and education levels are the most likely to access the internet wirelessly. 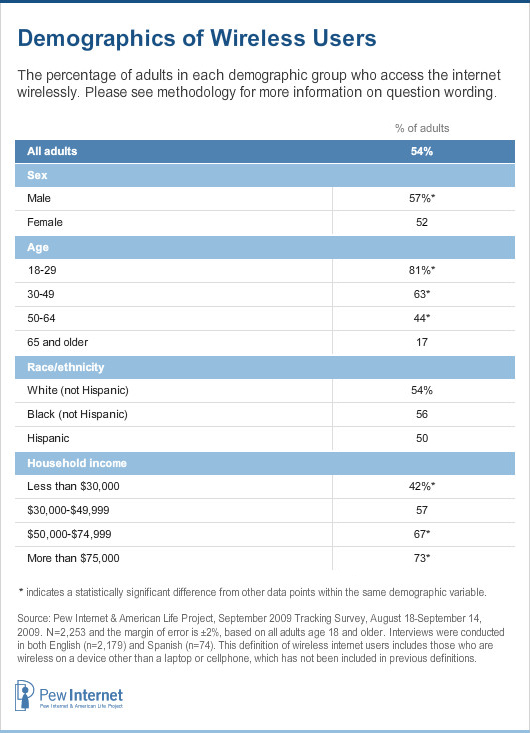