Teens continue to be avid users of social networking websites – as of September 2009, 73% of online American teens ages 12 to 17 used an online social network website, a statistic that has continued to climb upwards from 55% in November 2006 and 65% in February 2008. 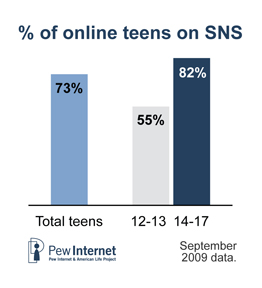 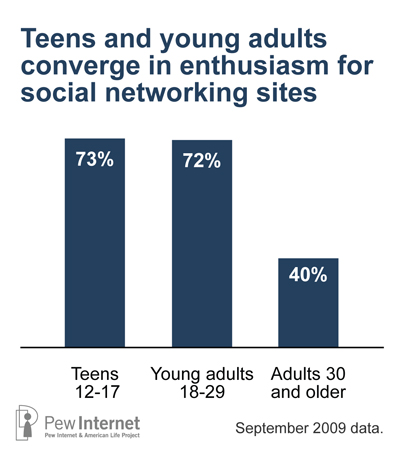 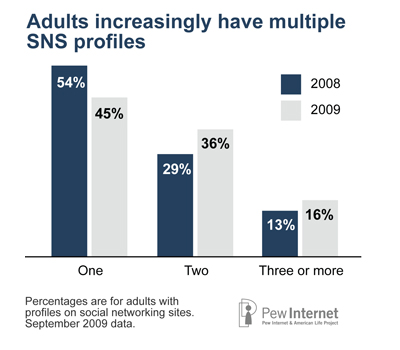 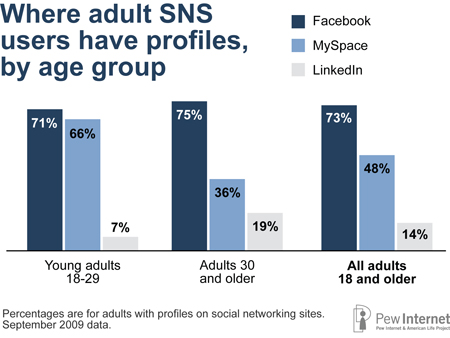 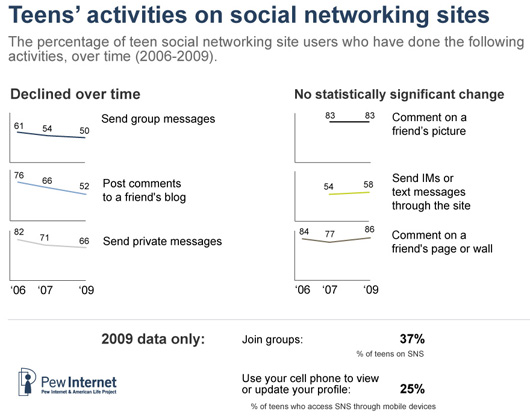 There has been much media attention given to Twitter and other microblogging services over the past year and initially the supposition was that, as with other types of social network services, teenagers would be leading the adoption charge on a social, connective technology.  However, data from September 2009 suggest that teens do not use Twitter in large numbers. While a September 2009 survey of adults suggests that 19% of adult internet users ages 18 and older use Twitter or update their status online,11 teen data collected at a similar time show that only 8% of online American teens ages 12-17 use Twitter.12 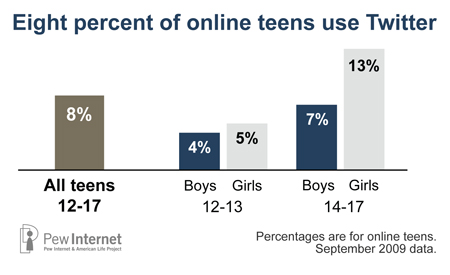 It should be noted that the question wording for teens is quite different from how the question was posed to adults so the results are not strictly comparable. For more on our adult findings about twitter, please see https://www.pewresearch.org/internet/Reports/2009/17-Twitter-and-Status-Updating-Fall-2009.aspx and https://www.pewresearch.org/internet/Reports/2009/Twitter-and-status-updating.aspx.

Older teens ages 14-17 are more likely to use Twitter than middle school teens ages 12-13. Among internet users, one in ten (10%) high school aged teens uses Twitter while less than half that number of younger teens – just 5% – do so. High school aged girls are driving the age differences; 13% of online girls in that age group use Twitter, compared to 7% of boys that age. Teens from households wired with broadband are slightly more likely to report using Twitter—with 9% of broadband users on Twitter compared to just 3% of teens with dial up access at home. There are no differences in Twitter use among teens by race, ethnicity or socioeconomic status. 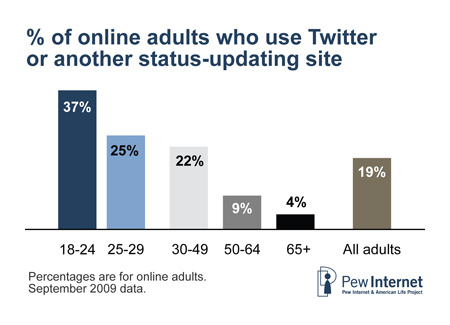 In previous reports,13 we have highlighted teens who are avid and clever creators of digital content. Recent data suggests that some online content creating activities have remained constant over time, while others have shown slight or even significant declines since 2006. Adults, however, have shown some increases in content creating over the past few years, with most of the increases found among adults older than 30. 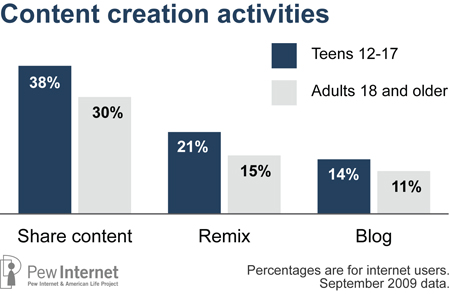 Teens share self-created content online like photos, videos, artwork or stories.  Online sharing of content that teens have created themselves has remained steady since 2006; 38% of internet-using teens say they shared content online in 2009, similar to the 39% who said the same in November 2006. There is no variation among teens today in sharing self-created content by sex, age, race, ethnicity or socioeconomic status – all groups are equally likely to share. By comparison, in 2006, girls and older teens were more likely to share content online. Still, in 2006 and in 2009, there were no differences in sharing content by race, ethnicity, family income or parent’s education level. 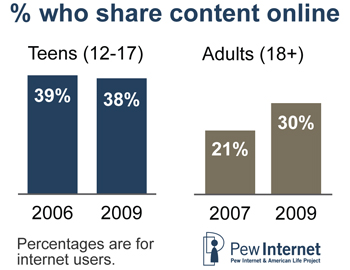 While creative content sharing among teens has not increased significantly since 2006, more adults now share self-created content online than did so two years ago. Three in ten online adults (30%) share online content as of September 2009, up from 21% of such adults in December 2007. Interestingly, almost none of this growth over time has come from young adults. Thirty-seven percent of online 18-29 year olds now share their personal creations online, a figure that is unchanged from the 36% who did so in 2007. In contrast, 28% of internet users ages thirty and up now take part in this activity, a twelve-point increase from the 16% who did so in 2007.

There are no major differences in online content sharing among adults based on gender or race/ethnicity, although there is some variation based on educational attainment. One-third (34%) of internet users with at least some college experience post their own creations online, compared with one-quarter (24%) of those with a high school degree or less.

As with content sharing, teens have held steady in their reports of remixing online content – taking material they find online such as songs, text or images and remixing it into their own artistic creations. About one in five online teens (21%) report remixing digital content, which is not a statistically meaningful difference from our previous finding that 26% of teens reported remixing in November 2006. Girls are more likely to remix content than boys, with one quarter (26%) of online girls remixing online material compared to 15% of boys. Younger boys are the least likely to remix content – just 9% of online boys ages 12-13 remix. Remixing shows no variation by race, income or parent’s level of education. Remixing in 2006 showed similar patterns to 2009, with the only difference being that boys and girls were equally likely to report remixing content in 2006. 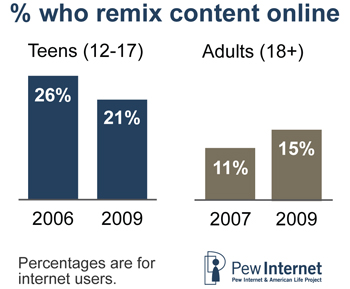 Among online adults, 15% take part in remix culture—and as with online content sharing, remixing has grown somewhat in popularity among older adults over the last two years and not at all among young adults or teens. One in five (19%) online 18-29 year olds remixes content they find online (unchanged from the 20% who did so in late 2007), while 13% of internet users ages thirty and up do so (a five percentage point increase from the 8% who did so in 2007). In contrast to teens, among adults, men and women are equally likely to remix content. There is little variation among adults based on race/ethnicity or socio-economic status.

Among all the content creating activities discussed here, most striking is the decline in blogging among teens and young adults.  Since 2006, blogging by teens has dropped from 28% of teen internet users to 14% of online teens in 2009. 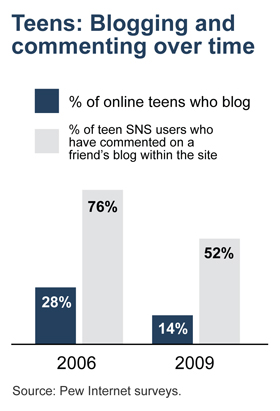 Teens are now beginning to resemble their elders in their likelihood of blogging, as about 12% of adults have consistently reported blogging since February 2007.  This decline is also reflected in the decline of the number of teens who say they comment on blogs within social networking websites – 52% of social network-using teens report commenting on friends’ blogs within these sites, down from 76% commenting in 2006 (as discussed earlier in this report.) Continuing a trend in teen blogging that first emerged in 2006, teens from lower income families – those earning below $50,000 annually — are more likely to report keeping a blog than teens from households earning more than $50,000. While 23% of online teens from families earning less than $50,000 per year keep a blog, just 8% of teens from households earning more than $50,000 a year say they keep a blog. Unlike in years past, boys and girls are statistically just as likely to keep a blog. There are no racial or ethnic differences in blogging by teens. 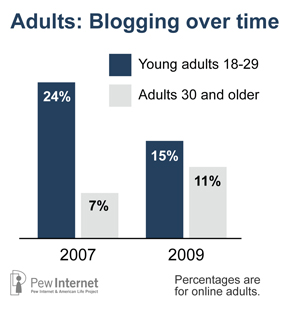 The prevalence of blogging among adults as a whole has remained consistent because the decline in blogging among young adults has been marked by a corresponding increase in blogging among older adults. For example, in December 2007, 24% of online 18-29 year olds reported blogging, compared with 7% of those thirty and older. By 2009, that difference had nearly disappeared—15% of internet users under age thirty and 11% of those ages thirty and up now maintain a personal blog. Among adult internet users, blogging is equally common among men and women; whites, black and Hispanics; and those with low and high levels of income and education.

Along with the content creation activities analyzed above, our September 2009 survey asked adult internet users about three additional content creation activities that were not asked of teens. These activities include: creating or working on a personal webpage; creating or working on a webpage or blog belonging to someone else (such as friends, groups, or for work); and posting comments to an online news group, website, blog or photo site.

Posting comments online (such as on a news group, website, blog or photo site) has become somewhat more common among adults over the last two years. Just over one-quarter (26%) of wired adults posted comments online as of September 2009, up from 22% of such adults in late 2007. As with many of the content creation activities discussed here, those under age thirty are no more likely to post online comments in 2009 then they were in 2007, while for older adults commenting has become more popular in recent years. In 2009 33% of internet users ages 18-29 posted comments online (unchanged from the 35% who did so in December 2007). Among internet users ages thirty and up, one-quarter (24%) now post comments online, up from 18% in late 2007. As reported earlier, teens are enthusiastic online commenters within the social network context. Fully 86% of social-networking teens post comments to a friend’s page or wall on a social network site and 83% post comments on friends’ photos posted to an online social network. 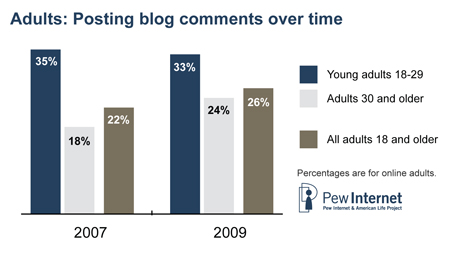 There is little variation in online commenting by adults based on gender, race/ethnicity or income. However, education does play a role—31% of adult internet users with at least some college experience post comments online, significantly higher than the 20% of those with a high school degree or less who do so.

Next: Part 4: The internet as an information and economic appliance in the lives of teens and young adults
← Prev Page
Page1Page2Page3Page4You are reading page5Page6Page7
Next Page →