In a head-to-head matchup against Republican John McCain in the fall, Obama also has some online advantages. Obama and McCain supporters are equally likely to use the internet, but some 65% of online Obama’s supporters in a fall contest say they get political news and information on the internet, compared with 56% of online McCain’s supporters.

At the level of party partisanship, there are few differences on basic measures such as using the internet or going online to look for political news and information:

Yet despite these outward similarities, wired Democrats are outpacing online Republicans in their usage of the internet for political reasons—from social networking to watching online video to contributing money online to signing up for campaign-related email. In large part, these differences result from the relative youth of those who self-identify as Democrats. Young Democrats and Republicans utilize tools such as online video at similar rates, but this youthful, tech-savvy cohort of voters makes up a larger proportion of all Democrats.

The relatively small sample of wired Democrats in our survey prevents a robust age-based analysis of Obama and Clinton supporters, although a similar phenomenon is likely in evidence within the Democratic primary race.

Obama supporters outnumber Clinton supporters in their use of online video for political purposes. 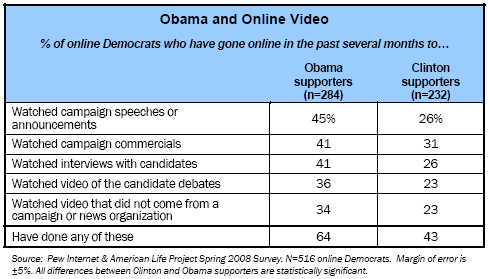 When paired in a head-to-head matchup with McCain, Obama still maintains clear advantages with respect to online video. Compared with those who would support McCain in a head-to-head matchup in the fall, wired Obama supporters are more likely to go online to watch campaign commercials (36% vs. 26%), candidate debates (29% vs. 21%), interviews (32% vs. 25%), and speeches or announcements (35% vs. 25%).

Led by Obama supporters, Democrats are increasingly using the web to bypass existing gatekeepers and seek out their own political “primary sources.”

More often than Republicans, Democrats are bypassing the traditional media and the campaigns themselves to seek out raw campaign material such as speeches, position papers, and video of debates online. Fully 45% of online Democrats have done at least one of these activities thus far in the campaign cycle, compared with 34% of Republicans. Among Democrats, Obama’s supporters are leading this charge—57% of wired Obama supporters have sought out this type of information online, compared with 38% of online Clinton fans.

Obama supporters also lead the field in their use of “Politics 2.0” online tools.

Relative to both Clinton and McCain supporters, Obama supporters use the internet in greater numbers to donate money and influence the online debate. Among Democratic online political users, Obama’s supporters are more likely than Clinton’s to forward political commentary to their friends and family, sign online petitions, and contribute money to their candidate online: 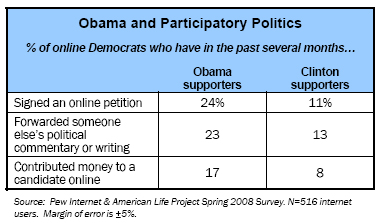 In a head-to-head matchup with Republican McCain, Democrat Obama has similar advantages: among those who go online, his supporters are more likely to sign an online petition (18% have done so, compared with 11% of McCain supporters), sign up to receive emails from the candidates or campaigns (17% vs. 8%), contribute money online (13% vs. 5%), to post their own political commentary or writing (8% vs. 4%), and volunteer online for activities related to the campaign (5% vs. 2%). While Clinton’s online advantages are not as clear cut, her supporters are more likely than McCain’s supporters to sign up for candidate emails (16% vs. 10%) and to sign up online for campaign-related volunteer work (5% vs. 1%).

Democratic supporters of both Clinton and Obama outpace Republicans in their adoption of social networking. 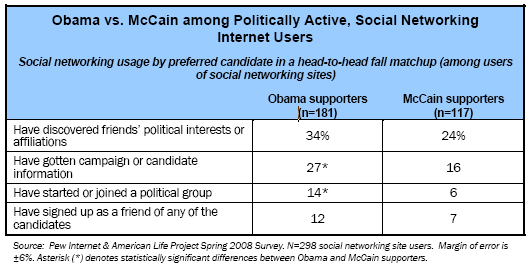 Next: The impact of the internet
← Prev Page
Page1Page2Page3Page4You are reading page5Page6Page7
Next Page →

The Internet and the 2008 Election Acknowledgments The election online so far Beyond the sound bite
Partisan story
IntroductionObama supporters outnumber Clinton supporters in their use of online video for political purposes.Led by Obama supporters, Democrats are increasingly using the web to bypass existing gatekeepers and seek out their own political “primary sources.”Obama supporters also lead the field in their use of “Politics 2.0” online tools.Democratic supporters of both Clinton and Obama outpace Republicans in their adoption of social networking.
The impact of the internet Methodology