Fully 46% of all Americans have used the internet to get news about the campaigns, share their views, and mobilize others.

The 2008 election campaign has sparked unprecedented interest within the electorate. Throughout the spring, surveys by the Pew Research Center for The People & The Press have found that roughly one-third of Americans have been following news about the primary campaign very closely—a level of interest often not usually reached until the peak of election season. Within this context, large numbers of Americans are not only going online to learn about the campaigns, but are also taking an active role in promoting online conversations about politics and spreading news and information about their candidate of choice or the race in general.

In total, 46% of all adults are using the internet, email, or phone text messaging for political purposes in this election. That is the percentage of those who are doing at least one of the three major activities we probed—getting news and information about the campaign, using email to discuss campaign-related matters, or using phone texting for the same purpose.

This is the first survey in which we have asked about the use of text messaging for political reasons. While text messaging has not yet equaled the internet or email as a widespread political tool, we find that nearly one in ten text messaging users (representing 4% of all adults) are sending or receiving text messages about the campaign or other political issues on a regular basis.

More Americans have gone online to get political news and campaign information so far than during all of 2004.

At this point in the 2004 election cycle, 31% of Americans had used the internet to get political news and information. The jump to 40% who say this now is significant and is even more striking because the population of online political users is bigger than the number of Americans who had used the internet for politics during the entire 2004 campaign. Moreover, the proportion of Americans getting political news and information on any given day in the spring of 2008 has more than doubled compared with a similar period in 2004. In May and June of 2004, about 8% of adults were using the internet on a typical day to stay in touch with political developments. In April and May of this year, 17% of adults are getting political news online on a typical day.

Two new internet activities have stormed the political stage: 35% of Americans have watched online videos related to the campaign, and 10% have used social networking sites to engage in political activity.

After the 2004 presidential race, the Pew Internet Project asked a broad, general question about whether respondents had watched any kind of video about the campaign or the election, and 13% of adults said they had. This year we asked more questions because video has become such a commonplace activity online. We found that 35% of adults had watched some form of political video online so far.

We have also added questions about the role of social networking sites in politics to our survey this year and found that 10% of all Americans have used sites such as Facebook or MySpace for some kind of political activity. That amounts to 14% of internet users and fully 40% of those who have created profiles on such sites.

For young adults in particular these sites are a key component of the online political experience: 66% of internet users under the age of 30 have a social networking profile, and half of young profile owners use social networking sites to get or share information about the candidates and the campaign.

Nearly one in ten internet users has donated money to a candidate online at this point in the race.

Young voters tilt toward Obama specifically and toward the Democrats generally, and that gives the Democrats some online advantages.

Young voters in our survey tend to gravitate toward the Democratic Party and the Obama campaign at greater rates than their elders, and their comfort engaging with the political world online is clearly in evidence in our survey. Online Democrats outpace Republicans in their consumption of online video (51% vs. 42%). Furthermore, Democrats are significantly ahead among social networking site profile creators: 36% of online Democrats have such profiles, compared with 21% of Republicans and 28% of independents.

Among online Democrats, Obama’s supporters are more likely than Clinton’s supporters to have made online campaign contributions (17% vs. 8%), to sign online petitions (24% vs. 11%), to have passed along political commentaries in blogs and other forms (23% vs. 13%), and to have watched campaign videos of any kind (64% vs. 43%). Obama’s backers are also more likely than McCain’s partisans to have engaged in range of online campaign activities.

39% of online Americans have used the internet to gain access to primary political documents and observe campaign events.

There is evidence of significant citizen desire to access campaign materials directly. Fully 39% of internet users (29% of all adults) have gone online to read or watch “unfiltered” campaign material, which includes candidate debates, speeches/announcements, position papers, and speech transcripts. Obama’s supporters are the most likely to have embraced these online activities.

Despite the increased salience of online sources in the political debate, wired Americans have mixed views about the overall impact of the internet on politics.

Although a respectable share of online Americans say that the internet has helped them to be more involved in the campaign and feel more personally connected to their candidate of choice, even larger numbers feel that the internet is a megaphone for extreme viewpoints and a source of misinformation for many voters. 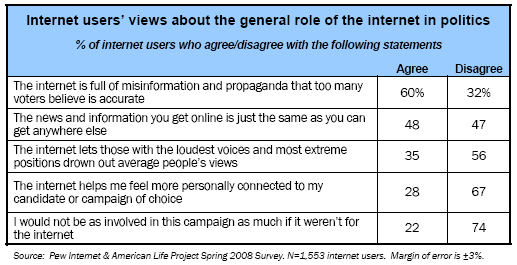 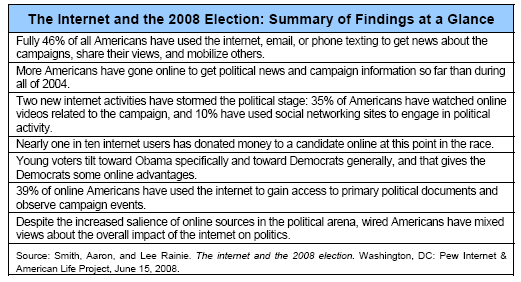 Next: Acknowledgments
← Prev Page
You are reading page1Page2Page3Page4Page5Page6Page7
Next Page →