The 2008 presidential election race has produced its share of internet firsts. Three of the Democratic candidates—John Edwards, Hillary Clinton, and Barack Obama—essentially declared their candidacies online. Obama has broken fundraising records, mostly through online contributions. Citizen questions for key party debates were solicited and delivered via videos posted on YouTube—including one from a snowman. Politics has its own channel on YouTube, and individual candidates also have their own channels. Libertarian Republican Ron Paul established a special presence online that sustained him through the early caucus and primary season.

The presidential candidates are now recruiting supporters through profiles on social networking sites such as Facebook and MySpace, and their supporters themselves are creating candidate communities on those sites. Indeed, Obama has integrated social networking online and offline as a core element of his outreach and mobilization.

In addition, a series of major news stories have been broken or given powerful urgency through online activity, including:

Moreover, the punch-counterpunch rhythms of the campaign are now usually played out online in emails and videos rather than in faxed press releases and 30-second ads.

Added up, all this means that the bloggers, the growing activity on social networking sites, and the number of viewers of politically relevant YouTube videos have become a key part of at least some campaign events this election cycle. In addition, the technology-assisted developments are unfolding at the same time that younger, tech-embracing voters are playing a particularly prominent role at the ballot box, especially in the Democratic race. From the very first contests, voters between ages 18 and 30 have voted in greater numbers throughout the nation than in previous races.13 And there is mounting evidence that they are blending their interest in Democratic matters with their enthusiasm for using the internet and cell phones.14 In this season, just the 12th year of presidential politics online, there is no disputing the fact that the internet has moved from the periphery to the center of national politics.

Some 40% of all adults have used the internet to get political news and information about the campaign so far, up from 31% at the same point in the 2004 presidential race.

In a new survey, we find that the dramatic rise of the internet in politics continues and expands. There is a larger population of people going online to get political news and information at this point of the 2008 contest than at any time in the 2004 election. Some 40% of all adults have gone online to get political news and information at this stage of the 2008 race, compared with 31% of adults who got political news and information at a similar point in the 2004 campaign. In keeping with the high level of overall interest about the 2008 campaign, we also find that wired Americans are going online for news about the race with a greater degree of regularity than in the past. Among internet users, 23% went online to look for news about the campaign on a typical day, compared with 13% at the same point in the 2004 race and just 7% in the spring of 2000.

Much of the growth in online news consumption since our spring 2004 survey has occurred among the young, those with college experience, and those who live in higher-income households.

Particularly notable is the rise in online political news consumption by African-Americans, 40% of whom (representing 67% of online African-Americans) now go online for news or information about the campaigns, up from just 19% at the same time period in the 2004 race.

It is also striking to note that there has not been much growth among those over the age of 50, those with less education, or those living in relatively less well-off households. 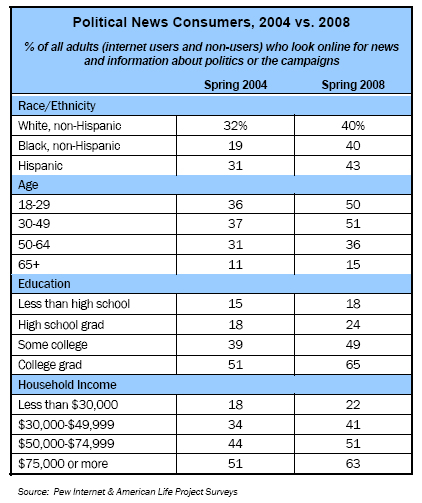 Americans are contributing regularly to the political conversation using the internet, email, and text messaging.

In addition to capturing overall online news consumption, we also measure the intensity with which people engage in the online political debate by asking them how frequently they take part in the political process using the internet, email, and text messaging.

Internet users are going online with great regularity to learn more about the campaign and engage in political activities. One-quarter (27%) of internet users go online once a week or more to do something related to the campaign, and 8% do so once a day or more.

Email is also a key tool for facilitating the online conversation. Among those who use email, one-third (35%) receive emails related to the campaign at least once a week or more, and 14% of email users say that they receive politics- or campaign-related emails on a daily basis. While email is being used most frequently to receive news and information, an additional 15% of email users are taking an active role by sending emails to their family or friends once a week or more, urging them to support a candidate or discuss the campaigns.

The third component of the online political discussion is text messaging, which we asked about in relation to politics for the first time in our spring survey. At the moment, text messaging is less of a factor in the political debate than the internet or email; 8% of those who use text messaging say that they send or receive text messages about the campaign or other political issues at least once a week. 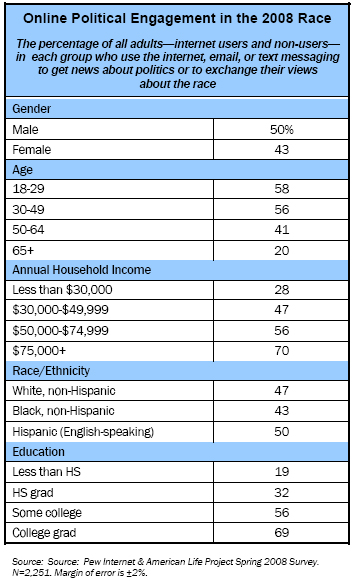 In total, this means that 63% of internet users—representing 46% of all adults—are going online or using email or text messaging to take part in the political conversation and get news or information about the campaigns.15

Next: Beyond the sound bite
← Prev Page
Page1Page2You are reading page3Page4Page5Page6Page7
Next Page →

The Internet and the 2008 Election Acknowledgments
The election online so far
IntroductionSome 40% of all adults have used the internet to get political news and information about the campaign so far, up from 31% at the same point in the 2004 presidential race.Americans are contributing regularly to the political conversation using the internet, email, and text messaging.
Beyond the sound bite Partisan story The impact of the internet Methodology