After a long trend toward less news coverage of candidates’ words and policy positions, the online environment is offering engaged voters new chances to gather more comprehensive information about campaign events, candidates’ speeches, and office-seekers’ positions on issues. They are doing workarounds of “sound bite” culture by using the internet to view campaign events directly and to parse candidates’ positions more fully.

Fully 35% of all adults have watched a politically related video so far. Some 16% of adults have read candidates’ position papers online, and 9% have read the full text of a candidate’s speech online.

Internet users are seeking out and engaging in a wide range of activities related to the campaign. The biggest surge has come with the spread of online political videos, which were hardly a force in internet users’ experience in 2004. Some 47% of online adults have watched at least one type of online political video (out of a list of five possible types of videos) in the past several months—this represents 35% of all adults.

Some of the video they are watching relates to material that was offered in news reports. At the same time, a large portion of it involves material that was not edited into news coverage. For instance, 27% of internet users have gone online to watch candidates’ speeches or announcements, and one-quarter have watched campaign-related videos that did not come from a news organization or the campaigns themselves.

Additionally, about one in five internet users (18%) has gone online to read a candidate’s position paper on a particular issue, and 12% have read the full text of a candidate’s speech online. The full-population figures for each activity are 16% for position papers and 9% for speech texts.

Taken together, these activities represent a movement away from political news and information that is filtered by traditional “gatekeepers” such as campaigns and the mainstream news media and toward an environment in which citizens make decisions about politics based on their own interpretations of primary campaign materials. Fully 39% of internet users (29% of all adults) have gone online to read or watch “unfiltered” campaign material, which includes candidates’ debates, speeches/announcements, position papers, and speech transcripts. That means a portion of voters are using the internet to learn more directly about campaign events that might have been comprehensively covered by traditional news media.

Web 2.0 features have a wider audience.

Although watching political videos and reading campaign documents are the most common online political activities, a second key aspect of the 2008 elections is the extent to which people are contributing to the political conversation. This includes signing up to receive campaign information, posting their own political commentary, forwarding things they find online to their friends and family members, or donating their time and money to one of the campaigns.

One in ten adults has forwarded or posted commentary or writing they found online, and similar numbers have signed an online petition or signed up to receive email from one of the candidates or campaigns. In total, 30% of internet users and 22% of all adults have done at least one of the nine activities listed below at this point in the 2008 election cycle. 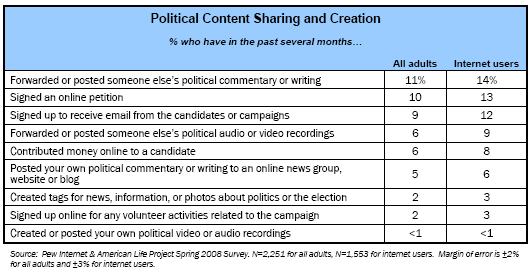 Additionally, the number of potential voters going online to watch video clips about the candidates or campaigns has skyrocketed—from 13% of all adults in 2004 and 2006 to 35% today.9

Online activism with social media has jumped since the 2006 midterm elections.

Our 2008 spring tracking survey represents the second time we have asked respondents whether they are sharing or creating online political content, and there have been notable increases in these activities since the peak of the 2006 midterm elections. Most notably, the percentage of all adults who have forwarded or posted someone else’s political commentary or writing has doubled, from 5% (7% of internet users) in fall 2006 to 11% (14% of internet users) in spring 2008. 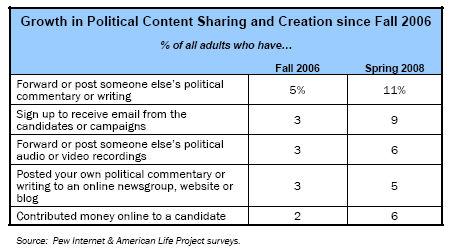 Even among those who are wired and politically engaged, young voters stand out compared with their elders based on their consumption of online political video and creation of unique political commentary and writing.

Social networking sites are not just for friending candidates.

One in three internet users has a profile on a social networking site such as Facebook or MySpace, and 40% of these (representing 10% of all adults) have used these sites to engage in political activity of some kind. In keeping with the conversational nature of the online political debate, the most common of these activities is the simple act of discovering the personal interests or political affiliations of one’s own friends—29% of social networking users have done this, compared with one in ten who has signed up as a friend of one or more of the candidates or started/joined a political group.

The Internet and the 2008 Election Acknowledgments The election online so far
Beyond the sound bite
IntroductionFully 35% of all adults have watched a politically related video so far. Some 16% of adults have read candidates’ position papers online, and 9% have read the full text of a candidate’s speech online.Web 2.0 features have a wider audience.Online activism with social media has jumped since the 2006 midterm elections.Young adults dominate political video consumption and content creation.Social networking sites are not just for friending candidates.
Partisan story The impact of the internet Methodology