Teens write for a variety of reasons—as part of a school assignment, to stay in touch with friends, to share their artistic creations with others or simply to put their thoughts to paper (whether virtual or otherwise). In this section, we evaluate the ways in which computers and internet technologies interact with the types of writing teens do, the frequency with which they engage in writing, and their own perceptions of the quality of their writing. While assigning causality is beyond the purview of this study, we hope to place the issue of writing within the broader context of the technological immersion of today’s teens.

Teens appreciate the ability to edit and revise their writing on a computer.

Teens feel that computers contribute more to the quantity of their non-school writing than to its quality. 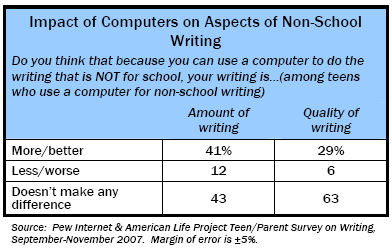 There are few major differences with respect to the impact of computers on the writing teens do outside of school. Girls tend to assign less responsibility to computers in terms of writing quality than boys—70% of girls say writing on a computer makes no difference in the quality of their writing, compared with 57% of boys.

In terms of the impact of computers on the amount of writing teens do, demographic differences center on age and parental education. Younger teens are more likely to feel that computers make them write less (18% of 12-14 year olds feel this way, compared with just 7% of older teens), while older teens are generally more likely to feel that computers have no impact on how much they write (47% believe this, versus 39% of younger teens). Parental education is also correlated with attitudes toward computers and writing. Among children of college-educated parents, 47% believe that they write more outside of school thanks to computers, compared with 34% of teens whose parents have no college experience.

Teens who personally own computers and those who do not are nearly identical in their attitudes toward the impact of computers on the quality and quantity of their writing.

Multi-channel teens are super communicators, but not super writers.

The Pew Internet Project’s recent report on Teens and Social Media18 identified a group known as multi-channel teens. These “super communicators” are defined by their usage of numerous tools—the internet, instant messaging, text messaging, cell phones and social networking sites—to communicate with friends, and they are much more likely than other teens to communicate daily across a range of media.

Multi-channel teens are also strikingly similar to other teens with respect to how much they enjoy their non-school writing, as well as the frequency with which they write for personal or non-school reasons.

Technology ownership has little relationship to the types of writing teens engage in, how frequently they write outside of school or the enjoyment they derive from their writing.

Despite concerns that computers and cell phones are encroaching on more traditional writing activities, our research indicates that simply owning these technologies has little impact on writing engagement. Teen computer and cell phone owners are nearly identical to the overall teen population in terms of the types of writing they engage in, as well as the frequency with which they write for non-school reasons.

While cell phone owning teens are more likely than non-cell phone owners to do certain types of writing in the school environment (such as essays, science labs and presentations), this is most likely due to higher rates of cell phone ownership among older teens, and not a result of technology use per se. 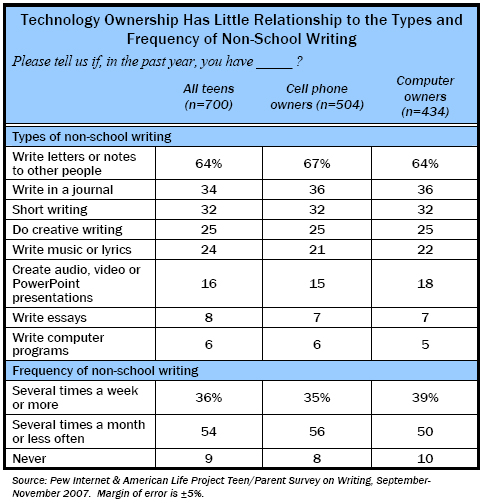 Bloggers do more kinds of writing, and write more frequently, than other teens.

While teens’ communication choices and use of physical technologies such as computers or cell phones are not strongly correlated with writing activities, there is a relatively strong association between writing and technology platforms that help teens share their thoughts with the world such as blogs and social networking sites.

Teen bloggers in particular engage in a wide range of writing outside of school. Bloggers are significantly more likely than non-bloggers to do short writing, journal writing, creative writing, write music or lyrics and write letters or notes to their friends. In this sense, bloggers are even more prolific than social networking teens when it comes to the types of writing they do. Social networking teens are unusual in their relative proclivity to write short writing, journal writing and music or lyrics.

Teen bloggers also write more frequently than social networking teens. Among all teens who do writing outside of school, 36% do so several times a week or more frequently. While social networking teens write for personal reasons at a similar frequency, fully 47% of teen bloggers write for personal reasons several times a week or more. Nearly one-quarter of teen bloggers (23%) write outside of school just about every day. 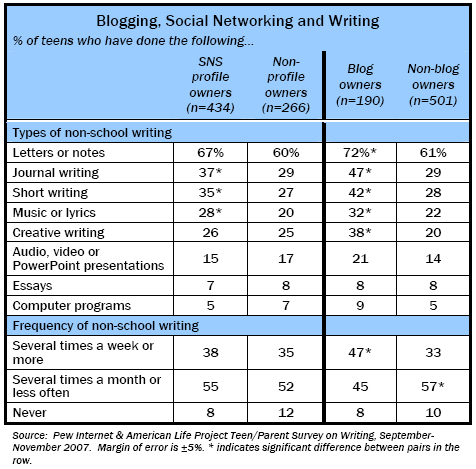 In addition to doing more types of writing and writing more frequently, teen bloggers are also among the strongest teen proponents of the importance of writing. Fully 65% of teen bloggers feel that writing is “essential” to later success in life, compared with 53% for non-bloggers and 56% for teens as a whole.

Next: Parental Attitudes toward Writing and Technology
← Prev Page
Page1Page2Page3Page4Page5Page6You are reading page7Page8Page9Page10
Next Page →

Writing, Technology and Teens Acknowledgments and Methodology Introduction The Lives of Teens and Their Technology Teens and Their Writing Habits Electronic Communication
The Relationship between Writing, Communication and Technology Ownership
IntroductionTeens appreciate the ability to edit and revise their writing on a computer.Teens feel that computers contribute more to the quantity of their non-school writing than to its quality.Multi-channel teens are super communicators, but not super writers.Technology ownership has little relationship to the types of writing teens engage in, how frequently they write outside of school or the enjoyment they derive from their writing.Bloggers do more kinds of writing, and write more frequently, than other teens.
Parental Attitudes toward Writing and Technology The Way Teens See Their Writing and What Would Improve It What Teens Tell Us Encourages Them to Write