As with many educational issues, parental investment and attitudes are important influences on their children. Parent support of writing programs and parental beliefs about both the quality of writing and the importance of writing for future success can influence parent-child interactions around school work and personal writing. Today’s parents believe that writing is an essential skill for their child’s later success, and that technology is a generally positive force in the writing experiences of their teen.

A majority of parents use the internet.

The percentage of parents who are online is consistent with our findings from our Parents and Teens survey in October-November 2006. As in 2006, 87% of parents of teens say they use the internet. Education, race and income are the largest factors influencing parental internet use. 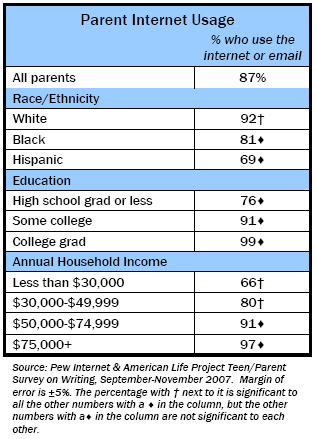 Parents today are highly attuned to the need for good writing skills as a prerequisite for success later in life. More than four-fifths of parents (83%) feel that there is a greater need to write well today than there was 20 years ago, compared with 9% percent who feel that good writing skills are no more or less important than ever. Just 5% feel that the ability to write well is less important now than in the past.

Recognition of the importance of good writing is particularly high in black households—94% of black parents say that good writing skills are more important now than in the past, compared with 82% of white parents and 79% of English-speaking Hispanic parents.

In addition to measuring the perceived importance of writing in today’s world, our survey asked parents to indicate whether they feel their teen does more, less or about the same amount of writing as they themselves did at a similar age, and parental attitudes vary widely on this issue. While almost half of parents (48%) feel that their children write more than they themselves did at the same age, nearly one third (31%) believe that children today write less. An additional 20% feel that their children write about as much teens in the past.

While parents with lower levels of education tend to take a positive view of the amount of writing their child engages in, some parents feel that their child writes less than children in the past. This is especially true for parents of boys—older boys in particular. As noted earlier in this report, boys are less likely than girls to write outside of school for personal reasons, and older boys in particular are unlikely to enjoy the writing they do for school; as such, parental perceptions on this subject likely have at least some basis in fact. 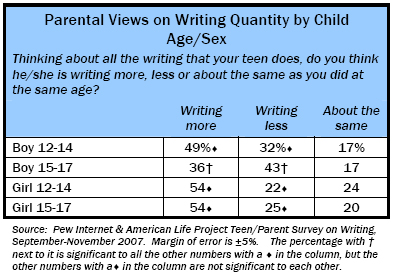 Parents have mixed views of how the writing their child does online relates to his or her overall writing skills.

What might explain the even split between parents who think that their child’s online communications are helpful to their writing and parents who find these communications harmful? Not technology ownership, as teens in each group are equally likely to own a computer, cell phone, blog, social networking profile and website.

Teens with a parent who views their internet writing positively tend to enjoy their school writing more than other teens (although, as with grades and writing enjoyment, there is no way to determine the direction of causality). Among these teens, 23% say they enjoy the writing they do for school “a great deal” compared with 7% of teens whose parent has a negative view of their online communications.

Parents generally view computers as a positive force in their teens’ writing development, albeit one that has its downsides.

Parents harbor mixed feelings about how computer use aids or detracts from specific elements of their child’s overall writing abilities. To evaluate parental attitudes toward this issue, we presented parents with a series of eight questions about the way computers might have an impact on their child’s writing. For each question, respondents told us whether they felt that writing on a computer made that impact more likely, less likely, or if using a computer made no difference in that aspect of their teen’s writing.

Their responses indicate that parents do not view computers as a monolithic “good” or “bad” influence on their child’s writing. Rather, most parents say they appreciate the value of technology in helping their child’s writing, while at the same time recognizing certain downsides and tradeoffs. 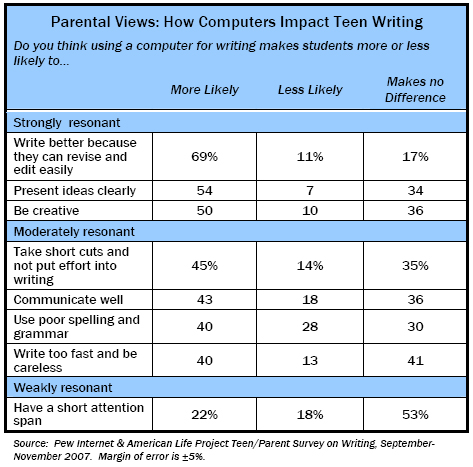 Of the eight writing and technology impacts we evaluated, three positive impacts resonate relatively strongly with parents. These include that using a computer for writing allows teens to “write better because they can revise and edit easily,” “present ideas clearly” and “be creative.” Yet, while these positive impacts appeal to parents, 40% of parents or more also believe that computers have a negative impact on their child’s writing, by causing them to take short cuts, use poor spelling and grammar and write too fast or be careless in their writing.

Overall there are few significant differences in parental attitudes on this issue, with most relating to race or ethnicity. Four in ten white parents (42%) feel that computers have no impact on creativity, compared with 26% of black parents and 29% of Hispanic parents. Over half of English-speaking Hispanic parents (54%) believe that computers make their teen more likely to write too fast and be careless, compared with 39% of white parents and 34% of black parents. Moreover, just 56% of Hispanics believe that writing on a computer helps their child write better because he or she can edit and revise easily, significantly lower than the figure for white (70%) and black (77%) parents. Finally, one third of black parents (33%) feel that writing on a computer makes their child more likely to have a short attention span—significantly higher than the comparable figure for whites (19%).

Fathers are more ambivalent than mothers on the issue of effort and taking short cuts.  Four in ten fathers (42%) feel that computers make no difference in the short cuts or overall effort their child puts into his or her writing, compared with 30% of mothers.

Finally, there are some statements over which parents are split, with large numbers of parents feeling positively, and equally large numbers responding negatively. For instance, 40% of parents feel that writing on a computer makes their child more likely to use poor spelling and grammar, but nearly one in three (28%) feel that using a computer for writing makes this outcome less likely. Similarly, parents are evenly divided as to whether using a computer for writing makes their child more likely (22%) or less likely (18%) to have a short attention span.

Parents and teens generally agree on the importance of writing, though parents view computers as having a more favorable impact on teens’ writing than do teens themselves.

As we shall see in more detail in the next section of the report, teens share their parents’ belief that writing is important to their future success. A majority of teens believe that writing is “essential” for a successful future, and their parents agree that there is a greater need for good writing skills today than in the past.

In a similar vein, parents are generally more positive about the effects of computers on their child’s writing than teens themselves, who are likely to feel that writing on a computer does not have an effect on their writing in a meaningful way, either positive or negative. 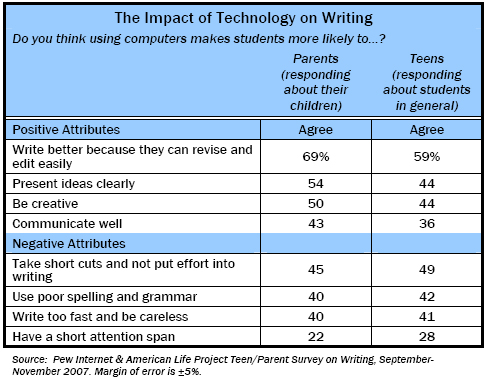 Next: The Way Teens See Their Writing and What Would Improve It
← Prev Page
Page1Page2Page3Page4Page5Page6Page7You are reading page8Page9Page10
Next Page →

Writing, Technology and Teens Acknowledgments and Methodology Introduction The Lives of Teens and Their Technology Teens and Their Writing Habits Electronic Communication The Relationship between Writing, Communication and Technology Ownership
Parental Attitudes toward Writing and Technology
IntroductionA majority of parents use the internet.Parents believe that good writing skills will bring future success.When I was your age . . .Parents have mixed views of how the writing their child does online relates to his or her overall writing skills.Parents generally view computers as a positive force in their teens’ writing development, albeit one that has its downsides.Parents and teens generally agree on the importance of writing, though parents view computers as having a more favorable impact on teens’ writing than do teens themselves.
The Way Teens See Their Writing and What Would Improve It What Teens Tell Us Encourages Them to Write