At this time in internet history, e-government is evolving to offer information, help, and efficiencies of all sorts to citizens. Measuring citizen participation in e-government and evaluating its success and shortcomings so far can help point the way toward improved online services and to a more satisfied, and therefore involved, engaged citizenry.

This research was designed as a lens into this e-government moment in time.  The report focuses on people’s problems that fall within the realm of government administration or concern. It examines how people seek to deal with these kinds of problems and solve these kinds of matters. In particular, it compares and contrasts the different ways (internet versus more traditional ways) people approach the government for the help they need.

Internet users are much more likely to contact the government than non-users, whether or not they actually used the internet to make that contact. Two-thirds of internet users (65%) say they have contacted the government in the past year, compared with 36% of those who do not use the internet. Internet users double non-users in contacting the government offline as well. There are no certain causes in our data that explain this finding. Perhaps internet users, who are more highly educated than non-users, feel more confident using their research or problem-solving skills, or perhaps they are inclined to use multiple approaches in trying to accomplish their mission.

A similar pattern emerges when comparing high-access and low-access users. Two-thirds of high-access internet users (66%) say they have contacted the government in the past year, compared with 43% of those who have only dial-up access at home or no personal internet access.

Many now expect the government to offer information and services online.

Most Americans expect their government to make information and services available online. Seven in ten (70%) say they expect to be able to get information or services from the government agency website when they need it. Only 23% do not expect that.

Nearly four in five internet users (78%) have visited government websites to seek information or assistance. They most commonly visit a local, state or federal government website: a total of 71% have done this, including 66% in the past year.

Given the many ways that Americans get in touch with their government, it is no surprise they have a range of opinions about the best way to do so in the future. 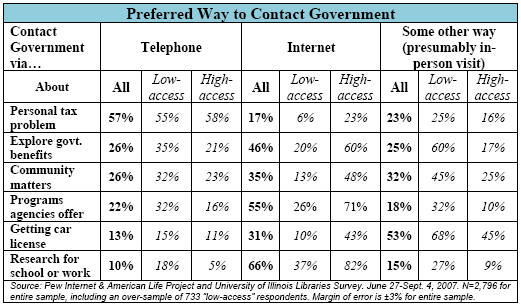 Even among those with no reported contact with their government in the past year, there is increasing awareness of various means to deal with the government. Forty-six percent now say they are aware that the government has set up 800-numbers and websites to provide help to the general public, an increase over the 38% found in a July 2003 Pew Internet Project survey.

Next: Chapter 3: Who goes to Public Libraries?
← Prev Page
Page2Page3You are reading page4Page5Page6Page7Page8Page9Page10Page11Page12
Next Page →

Information Searches That Solve Problems Acknowledgments Chapter 1: Libraries, Information, and the Internet
Chapter 2: Americans in contact with their government
IntroductionMany now expect the government to offer information and services online.78% of internet users have visited government websites.How would Americans like to contact their government?
Chapter 3: Who goes to Public Libraries? Chapter 4: Where do Americans turn for information or help? Chapter 5: Public Libraries step up Chapter 6: Successful Encounters and Best Sources Chapter 7: The Impact of Privacy Concerns on Information Seeking Chapter 8: The Special Circumstances of those with Low-access to the Internet Chapter 9: Where Libraries Stand Methodology