More than half of all respondents, 56%, who said they faced a problem in the past two years identified one of three matters: health care, paying for health care and government benefits such as Social Security and military pensions. Parsing that further, the responses from Americans who have high access and low access to the internet diverge. Those with low access to the internet or no access at all are half as likely to identify some other problem in their lives, at 14%, as high-access internet users, at 30%. And they are twice as likely to simply not identify a problem at all.

The low-access group is also much less likely to say that in the future they would use the internet to help them address their matters of concern. 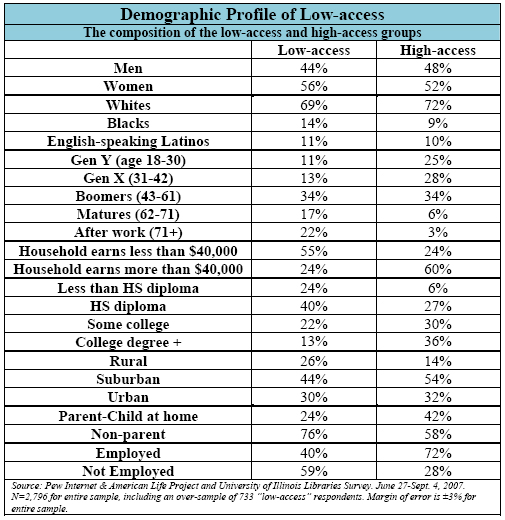 Views held by those with low-access

Those with low-access to the internet share similar opinions with high-access internet users about the state of the nation and the trustworthiness of others. There are a few attitudinal differences: For example, those with low-access are less likely to be satisfied with how things are going in their community, 64%, compared with 71% of respondents overall.

Low-access Americans are also somewhat more distrustful of the government in Washington, with 65% saying here that the government can be trusted only some of the time, compared with 56% of all Americans who argued the same thing in a similar Pew Internet Project poll several years ago.12

Those in the low-access group who do identify a problem they addressed, report using a  slightly smaller number of sources as they try to address those problems than those in the high-access group (a mean of 2.5 sources v. 2.9 sources). This suggests that the lack of good access to the internet could have an impact on the scope of help available to them.

How the low-access group uses the library.

Next: Chapter 9: Where Libraries Stand
← Prev Page
Page2Page3Page4Page5Page6Page7Page8Page9You are reading page10Page11Page12
Next Page →