The inter-related factors of income, internet access and education are related to greater success in dealing with these personal problems. Contrary to what one might expect, success is not necessarily related to using more sources of help. While the data is far from definitive, it appears that greater efficiency at identifying and getting assistance from various sources is what leads those with higher incomes and greater internet access to greater success. 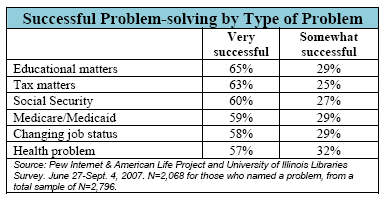 Which sources of information provide the most help?

Nearly half of respondents, 49%, said they found a lot of the information they needed from government offices and agencies, 28% say they found some of what they needed.

There are few differences among demographic groups. For those who used the internet and those who went to public libraries, there are very few differences by age, income, education, and levels of internet access in terms of how much information they found.

Next: Chapter 7: The Impact of Privacy Concerns on Information Seeking
← Prev Page
Page2Page3Page4Page5Page6Page7You are reading page8Page9Page10Page11Page12
Next Page →