Libraries continue to fulfill their historic role as information centers and sources, even as the internet has made so much data available.  At the same time the role of the library in helping people deal with one of the specific matters in this survey is changing.

Use of libraries as a source for dealing with these matters is higher among those who are younger and those with lower incomes. 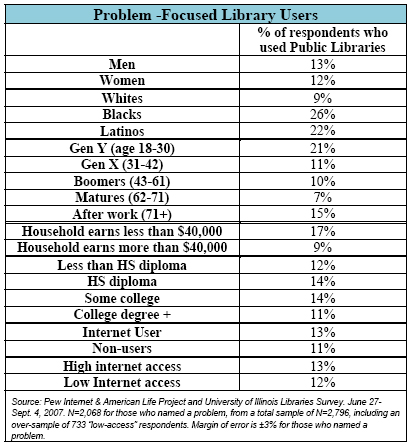 One in five, 21%, of those in Generation Y (age 18-30 years) say they sought information or assistance at a public library. Those in the oldest age group, age 72 years and older, are next most likely, at 15%, to use the library. This compares with just 11% of those in Gen X (age 31-42 years) and most of the other age groups.

Two of the contradictory themes of internet use – access and income – converge in the problem-focused use of libraries.

Among these users of the public library, the highest rate of usage is among those who have high internet access and also have low incomes. This is a result of the large number of young people who have high-access to the internet and yet have relatively low incomes because they are still in school (perhaps part-time) or are starting out on the lower-paid steps of the career ladders they have chosen.

Which problems drive people to libraries?

People will most often turn to the libraries for information or help with six specific matters. Among those matters, one in five respondents (20%) say they went to a public library to address educational matters.

About 10% went for help or information with changing job status, health, taxes and Medicare/Medicaid. Nearly as many, 7%, went to libraries with concerns about Social Security or military benefits.

Which resources do people use at libraries?

More than two-thirds of those who went to the public library (68%) used a computer there, indicating an impressive change in the role of public libraries.

Those who use the public library to look through newspapers and magazines in these cases have a decidedly younger bent. More than half (51%) of those in Gen X and Gen Y (ages 18-42 years) say they did that at the library, compared with 29% of those older than age 42 years.11 This may be a reflection of the reality that younger Americans are less and less likely to be subscribers to print publications and more likely to report reading them online or elsewhere.

Did people get personal help at the library?

The library users who did receive help were quite satisfied. Nearly four in five (79%) say they were very satisfied with the assistance they received from the library staff, and 19% say there were satisfied. Only 1% said they were unsatisfied.

When people don’t go to the public library.

If public libraries are good places for some people to find information and assistance, why don’t more people turn to them when addressing matters or problems?

One in ten people who faced one of these matters (10%) thought about going to the library but did not do so.12 This suggests that a key challenge for librarians is to make sure that those who consider the library as a potential problem-solving resource actually recognize they can use the library.

Will the public library be a strong resource in the future?

Fortunately for the public libraries, their potential customers skew toward the younger age group. Fully 40% of those in Gen Y (age 18-30 years) say they are very likely or somewhat likely to go to the public library if faced with a problem in the future, compared with 25% of older respondents from Gen X (age 31-41 years). Income is also a determinant: 41% of those earning less than $40,000 a year say they are likely to use the library, compared with 22% of those with higher incomes.

Among minority groups, the libraries are attractive: half of the African-Americans (50%) and 42% of the Latinos say they are likely to turn to the library, compared with 24% of white Americans.