For generations, public libraries have played a central role in providing a vast range of information to Americans. From the stacks of non-fiction books, to racks of newspapers and magazines, to shelves of reference materials and government documents, libraries have been the place to go to find answers to questions.

Over the last 15 years, the internet has challenged libraries’ traditional role by providing a seemingly limitless amount of information for only the price of an internet connection and a computer. Now from one’s own living room, it is possible to track down a government document, look up an article in the archives of a magazine, a traditional encyclopedia or even in the newest user-created encyclopedia, Wikipedia. Even asking for – and getting – help for all manner of questions or circumstances is now possible online, at any hour of the day or night.

Libraries have rushed to adapt themselves to the internet age, adding computers with digital catalogs of library holdings as well as free internet access. Libraries have worked to become the place to go for those who cannot afford a computer or an internet connection, or who need training or help in computer and internet literacy.

To explore this changing landscape, the Pew Internet & American Life Project and the University of Illinois partnered with funding from the U.S. Institute of Museum and Library Services6 to explore the role of libraries, the internet and other avenues in how Americans seek information and assistance on matters often related to the government, how well they succeed in their searches and how they see their efforts in the future.

The partners administered a survey to 2,796 American adults to seek insights into the way they seek information and support when they have problems to solve or questions to confront, and how libraries fit into the overall search. Because those with less access to the internet are of particular interest to libraries, this survey includes an oversample of 733 interviews with those who have low-access to the internet – or no access at all. In sum, this survey provides a rich, in-depth look at how Americans of all incomes and educational levels find the help they need, and the role played by libraries and government agencies in those efforts.

It is clear from previous work by the Pew Internet Project that the internet can play a major role in how people seek information about their everyday interests and help with their everyday needs (including those government-related interests and needs, which are the special focus of this report). Increasingly, those who lack full access to the internet may be hindered in their ability to simply keep up, as more information and services are offered online, and sometimes exclusively online.

Adoption of the internet is often not a simple, one-dimensional effort. One can go online from home, from work, and innumerable places in between. It is increasingly common for people to log on from school, from public libraries and other locales. Cell phones, Blackberries and iPhones allow users to go online while they are on the move.

The internet in America long ago moved from the province of the technology sophisticates to part of life in Main Street America.7 In this survey, a total of 76% of American adults (those age 18 and older) reported using the internet. And 24% say they do not use the internet.8  Fifty-nine percent of internet users go online at least once a day from home, and 43% say they use it that often from work.

In this survey, 77% of the home internet users – or 55% of all Americans – have high speed access via cable modem, DSL, a wireless connection, a satellite link or some other way. Some 18% of home users say they have dial-up access and 5% said they had some other type of access or did not know the specifics of their access at home.

A Portrait of Those With Low-access to the Internet 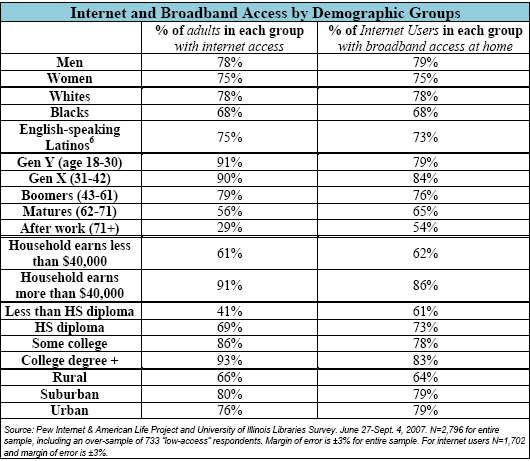 Those with limited access or no access to the internet are older, less affluent, and less well educated.

Nearly two-thirds of Americans have broadband access at home and/or at work (64%). The remaining 36% either have dial-up access (13%) or no access at all (23%). Research by the Pew Internet Project has consistently shown that broadband users are significantly different in their approach to the internet than dial-up users. Broadband users are more intense and engaged in their internet experience. They spend more time online and do many more things online. And they report notably happier outcomes from their online experiences. They have woven the internet into the rhythms of their lives in more rich and complex ways than dial-up users.

Not surprisingly, these differences have inspired libraries to find ways to serve the one-third of Americans who do not have broadband connections either at home or at work. To that end, libraries and other institutions have tried to fill gaps in internet and broadband access by offering it at their locales.11

Among internet users, then, 83% are considered high-access and 17% low-access.

By education: half of those with at most a high school degree (52%) are low-access, while only 18% of those with a college degree fall into the category.

By race and ethnicity: African-Americans are much more likely to be low-access: 48% have such limited access, compared with 52% who have high-access. English-speaking Latinos have an access profile much closer to that of white Americans, in large part because the Latino population is relatively young.12 But on a variety of other measures, such a media use, there are few differences between the two groups.

Some of these traits overlap. For instance, being young often means a person earns less than those who are older, or African-Americans are less likely to have completed college than whites. There are statistical techniques that adjust for such overlapping attributes and isolate the most salient aspects of being low-access. Using those techniques, we find that age is the strongest and most stable predictor of having low-access to the internet; the older one is, the more likely one is to be low-access. Income and education are next important; whether or not one’s income is less than $40,000 a year and whether one’s education extended beyond high school. No other characteristic – race, ethnicity, being a student, gender and work status – has much influence at all.

Next: Chapter 2: Americans in contact with their government
← Prev Page
Page2You are reading page3Page4Page5Page6Page7Page8Page9Page10Page11Page12
Next Page →