The internet has become increasingly important to users in their everyday lives. The proportion of Americans online on a typical day grew from 36% of the entire adult population in January 2002 to 44% in December 2005. The number of adults who said they logged on at least once a day from home rose from 27% of American adults in January 2002 to 35% in late 2005. And for many of those users, the internet has become a crucial source of information– Pew Internet & American Life Project show that fully 45% of internet users, or about 60 million Americans, say that the internet helped them make big decisions or negotiate their way through major episodes in their lives in the previous two years.

To explore this phenomenon, we fielded the Major Moments Survey in March 2005, that repeated elements of an earlier January 2002 survey. Comparison of the two surveys revealed striking increases in the number of Americans who report that the internet played a crucial or important role in various aspects of their lives. Specifically, we found that over the three-year period, internet use grew by:

Probing where the internet matters

In the March 2005 survey, respondents were first asked whether they had faced a decision pertaining to a particular item within the past two years and, if they had, whether the internet played a crucial role, an important one, a minor role, or no role at all. For five topics — buying a car, making a major financial decision, getting additional education and training for your career, choosing a school for oneself or child, and helping someone deal with a major illness — respondents were asked which occurred most recently, with follow-up questions probing specifically into how the internet played a role.

The table below shows how people’s use of the internet fit into eight possible decision events. The internet seems to matter most in cases where decisions can be based on research by non-experts, such as getting additional training for one’s job or choosing a school. These are arguably topics more easily grasped by non-specialists than say, health issues. A substantially smaller percentage of those who have dealt with medical problems turn to the internet, perhaps because of the complexity of many health issues.

Still, when extrapolated to millions of American adults who have turned to the internet in a significant way for a decision, the numbers are sizable. Some 21 million relied on the internet in a crucial or important way for career training, 17 million when helping someone else with a major illness or medical condition, and another 17 million when choosing a school for themselves or for a child. 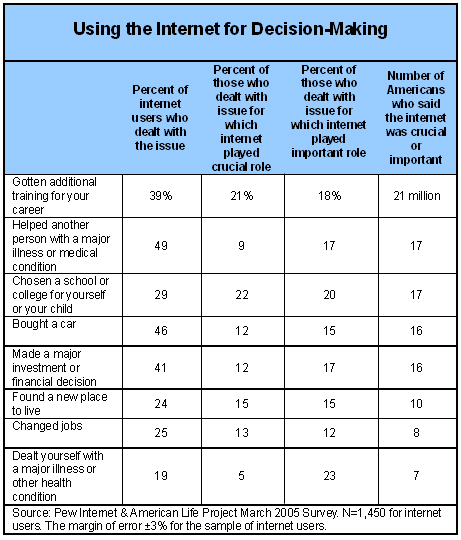 Looked at another way, the internet’s reach in playing a role in Americans’ decision making is striking. Fully 45% of internet users, or about 60 million Americans, say that the internet played an important or crucial role in at least one of the eight decision points listed above in the previous two years.

For the five decisions that people have most likely confronted in the past two years — buying a car, making a major financial decision, helping someone deal with a major health matter, choosing a college, or getting additional career training — 39% of internet users, or roughly 53 million people, said the internet played a crucial or important role in at least one of those decisions.

In an effort to put the internet’s role in a larger context, a series of follow-up questions were posed to these 39% of online users. The questions touched on whether they got bad information online, felt they had too much information, and whether information found online was more important than offline information.

Information overload was not experienced by the majority of those who relied heavily on the internet in the five key decisions. Just 15% said they felt they sometimes felt overwhelmed by the amount of information they had, 71% said they had all the information they needed and thought it was manageable, and 11% said they were missing information that they wish they had. Few who bought a car in the past two years reported information overload (9%). And even among who said the internet played a crucial or important role in helping someone with an illness, only 22% said they felt overwhelmed by the volume of information. With the stakes high — offering help to another person about a major illness — one might have expected higher levels of anxiety about sorting through such information.

The internet aids decision-making by connecting people to information

By what means does the internet play a helpful role? The internet offers access to websites and email allow users to connect to people directly. Online communities often function as information clearinghouses that let people compare options, find experts, or share information among people who have recently encountered similar circumstances.

The internet’s largest impact comes in connecting people to other people for advice or sharing valuable experiences. For about one-third (34%) of those who used the internet in a key way in a decision, the internet’s capacity to let users draw on social networks was part of the decision-making dynamic. The “social network” effect is still larger for the 28% who said the internet connected them to expert services, at least to the extent that they were able to contact specific individuals for help. 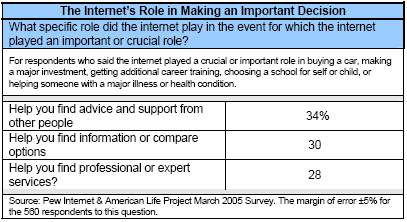 As noted earlier, the March 2005 survey repeated questions asked in January 2002 about the major moments people had encountered.1 In 2002, 45 million Americans, or 40% of internet users, said the internet played a crucial or important role in at least one of the eight decision points asked about. That number increased by one-third, to 60 million, by March 2005, and the share of online users for which the internet played a key role in a decision rose to 45%. 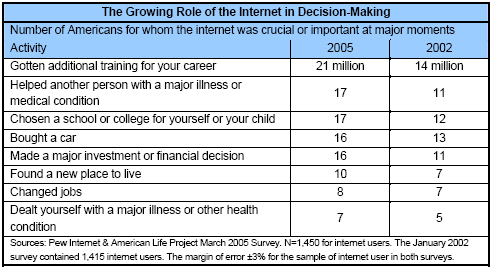 One possible reason for this increase is the growth in broadband penetration between 2002 and 2005. In January 2002, 17% of home internet users, or 9% of all Americans, connected to the internet using high-speed connections. By March 2005, 50% of home internet users connected to the internet using broadband, or 30% of all Americans. This means that the number of home broadband users in the United States roughly tripled from the beginning of 2002 to early 2005 — an increase from 18 million in January 2002 to 60 million by March 2005.2

But broadband is probably not the entire story behind the growth in internet-assisted decision making. Better online content or more widely advertised web sites also might have drawn some people to the internet when they were faced with a big decision. Since people draw on other people in using the internet for decisions, there could also be a network effect in play. As more people seek out other people to help with decisions, and find the experience beneficial, online “word of mouth” might draw others to the internet for help when confronted with a big decision.