BIG01    Now I’d like to ask you about some important decisions or changes that may have occurred in your life.  In the last two years have you…?

BIG02     Thinking about the process you went through as you made this decision or dealt with this event, would you say the Internet played a crucial role in this, an important role, a minor role, or no role at all?3 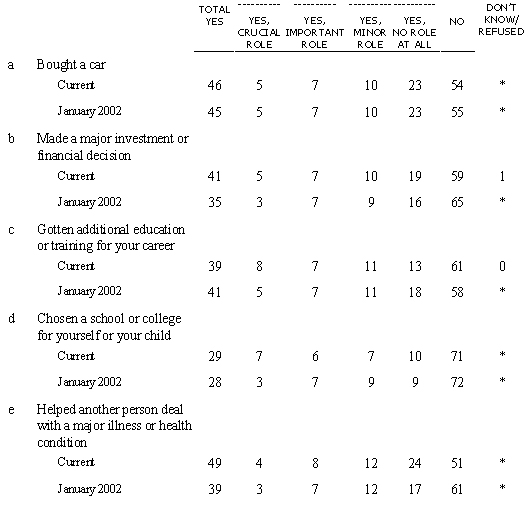 BIG04   We’d like to know the specific role the internet played in that decision or event.  Did the internet mostly… 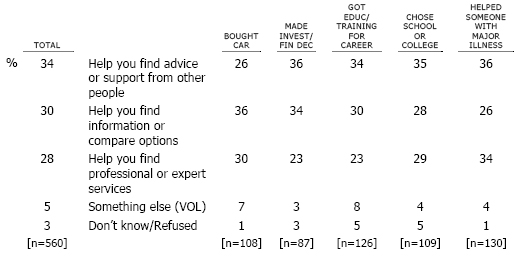 BIG05   At any point during this process, did you get BAD information or advice on the internet that made your experience more difficult, or wasn’t this a problem for you?

BIG03   Which of these important life decisions or events happened most recently?

This report is based on the findings of a daily tracking survey on Americans’ use of the Internet. The results in this report are based on data from telephone interviews conducted by Princeton Survey Research Associates International from February 21 to March 21, 2005, among a sample of 2,201 adults, 18 and older.  For results based on the total sample, one can say with 95% confidence that the error attributable to sampling and other random effects is plus or minus 2.3 percentage points.  For results based Internet users (n=1,450), the margin of sampling error is plus or minus 2.8 percentage points.  In addition to sampling error, question wording and practical difficulties in conducting telephone surveys may introduce some error or bias into the findings of opinion polls.

New sample was released daily and was kept in the field for at least five days. The sample was released in replicates, which are representative subsamples of the larger population. This ensures that complete call procedures were followed for the entire sample.  At least 10 attempts were made to complete an interview at sampled households. The calls were staggered over times of day and days of the week to maximize the chances of making contact with a potential respondent. Each household received at least one daytime call in an attempt to find someone at home.  In each contacted household, interviewers asked to speak with the youngest male currently at home. If no male was available, interviewers asked to speak with the oldest female at home. This systematic respondent selection technique has been shown to produce samples that closely mirror the population in terms of age and gender.  All interviews completed on any given day were considered to be the final sample for that day.

Non-response in telephone interviews produces some known biases in survey-derived estimates because participation tends to vary for different subgroups of the population, and these subgroups are likely to vary also on questions of substantive interest. In order to compensate for these known biases, the sample data are weighted in analysis. The demographic weighting parameters are derived from a special analysis of the most recently available Census Bureau’s 2003 Annual Social and Economic Supplement (March 2004). This analysis produces population parameters for the demographic characteristics of adults age 18 or older, living in households that contain a telephone. These parameters are then compared with the sample characteristics to construct sample weights. The weights are derived using an iterative technique that simultaneously balances the distribution of all weighting parameters. 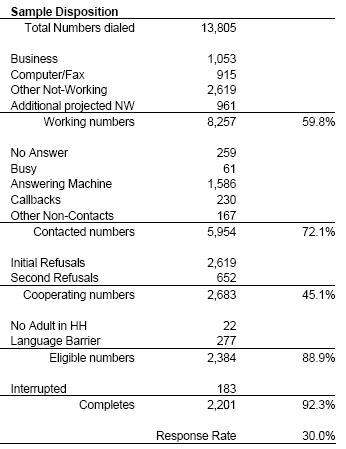 PSRAI calculates a response rate as the product of three individual rates:  the contact rate, the cooperation rate, and the completion rate.  Of the residential numbers in the sample, 72 percent were contacted by an interviewer and 45 percent agreed to participate in the survey.  Eighty-nine percent were found eligible for the interview.  Furthermore, 92 percent of eligible respondents completed the interview.  Therefore, the final response rate is 30 percent.