As of May 2010, 53% of American internet users look for information on Wikipedia, up from 36% of internet users the first time we asked about Wikipedia usage in February 2007. 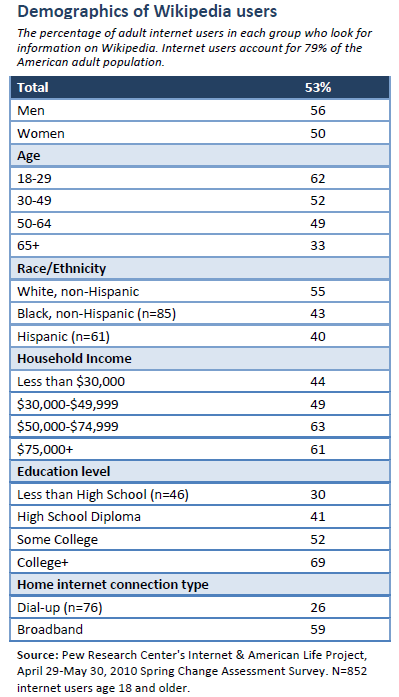 Education level continues to be the strongest predictor of Wikipedia use. The collaborative encyclopedia is most popular among internet users with at least a college degree, 69% of whom use the site. Broadband use remains another predictor, as 59% of those with home broadband use the service, compared with 26% of those who connect to the internet through dial-up. Additionally, Wikipedia is generally more popular among those with annual household incomes of at least $50,000, as well as with young adults: 62% of internet users under the age of 30 using the service, compared with only 33% of internet users age 65 and older.

In the scope of general online activities, using Wikipedia is more popular than sending instant messages (done by 47% of internet users) or rating a product, service, or person (32%), but is less popular than using social network sites (61%) or watching videos on sites like YouTube (66%). [Note: A full list of online activities is available at https://www.pewresearch.org/internet/Trend-Data/Online-Activites-Total.aspx ]

Wikipedia use over time

Wikipedia, the “multilingual, web-based, free-content encyclopedia project,” was created in 2001 and celebrates its tenth anniversary on January 15, 2011.

The percentage of all American adults who use Wikipedia to look for information has increased from 25% in February 2007 to 42% in May 2010, a 17 percentage point increase. The proportion of adults who use the internet over that same time period grew at a more modest rate, from 71% to 79% of all adults. 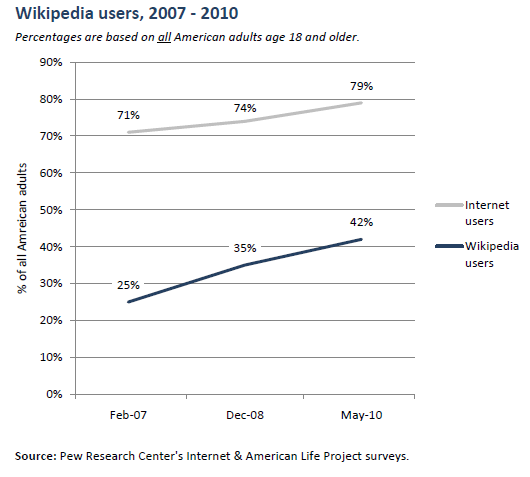