36% of online American adults consult Wikipedia; It is particularly popular with the well-educated and current college-age students

More than a third of American adult internet users (36%) consult the citizen-generated online encyclopedia Wikipedia, according to a new nationwide survey by the Pew Internet & American Life Project. And on a typical day in the winter of 2007, 8% of online Americans consulted Wikipedia.

There has been ongoing controversy about the reliability of articles on Wikipedia. Still, the Pew Internet Project survey shows that Wikipedia is far more popular among the well-educated than it is among those with lower levels of education. For instance, 50% of those with at least a college degree consult the site, compared with 22% of those with a high school diploma. And 46% of those age 18 and older who are current full- or part-time students have used Wikipedia, compared with 36% of the overall internet population. 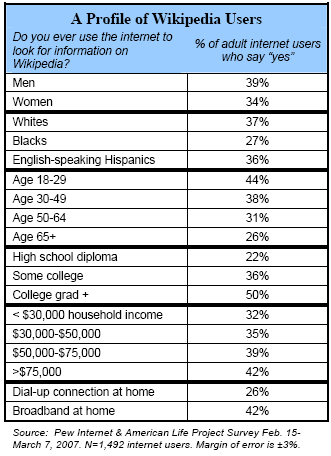 All told, the use of Wikipedia is more popular on a typical day than some of the more prominent activities tracked by the Pew Internet & American Life Project, including online purchasing, visiting dating websites, making travel reservations, using chat rooms, and participating in online auctions.

The popularity of Wikipedia

Likewise, data from Hitwise consistently registers Wikipedia in the top 10 most popular sites on the entire Web. Moreover, in the cluster of sites that are focused on educational and reference material, Wikipedia is by far the most popular site, drawing nearly six times more traffic than the next-closest site. 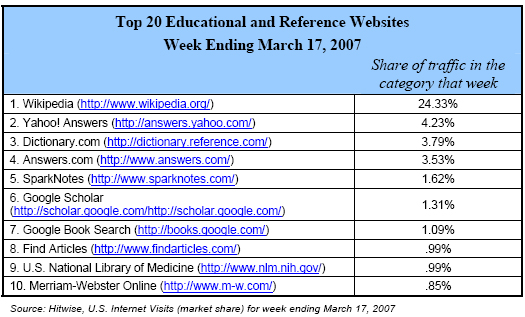 Why is Wikipedia so popular?

Hitwise data suggest several reasons for the popularity of Wikipedia: First, there is the sheer amount of material on the site, covering everything from ancient history to current events and popular culture. Because authors can create and edit entries at any time and in any location, new entries about emerging tech terms, celebrities or political scandals can be published or updated within a matter of minutes. In total, Wikipedia claims over 5.3 million entries, 1.6 million of them in English.

Second, Wikipedia’s dramatic growth is strongly correlated with Americans’ affection for search engines. Over 70% of the visits to Wikipedia in the week ending March 17 came from search engines, according to Hitwise data.

Wikipedia’s article structure helps explain this. Many of the pieces in the encyclopedia are full of links to other Wikipedia articles and other material on the Web. One of the prime factors in Google’s search results algorithm is the number of links connected to a given webpage. Thus, Wikipedia’s culture of encouraging internal and external links gives Wikipedia material a shot at very high Google rankings on many keyword queries. In fact, Wikipedia has become the #1 external site visited after Google’s search page, receiving over half of its traffic from the search engine. 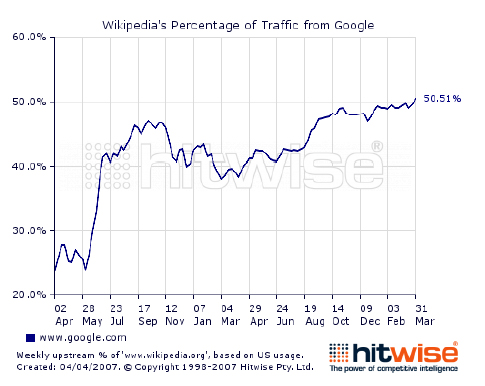 Convenience is likely a big factor, too

This finding also mirrors work we have done about the way people get health information and get political information online. The ease of using the internet to find information quickly seems a constant for many kinds of data hunts online.

Wikipedia users
36% of online American adults consult Wikipedia; It is particularly popular with the well-educated and current college-age students
About Us, Methodology