Once a person makes the switch to a high-speed internet connection at home, his or her relationship to the internet deepens. A home broadband user logs onto the internet more often and does a wider range of activities online than a dial-up internet user.2 One thing a broadband user does with greater frequency is surf the internet for news; having a home high-speed internet connection increases the likelihood, relative to dial-up users, of someone using the internet to gather news and information. The purpose of this report is to profile people’s daily newsgathering habits with a special focus on how the picture differs for those with broadband connections at home.

Online news has an important place in the daily online habits of internet users.

After email and going online to conduct a search, news is the third most popular online activity on the average day. According to our December 2005 survey, in which we expanded the news-gathering questions to capture a more accurate picture of the activity, 35% of adult internet users, or about 50 million adults, check the news online on the typical day. Historically, we have asked a single news-gathering question, which in December 2005 garnered 31% of internet users, or about 44 million adults – a significant increase since March 2002, when 27 million people got news online on the typical day. 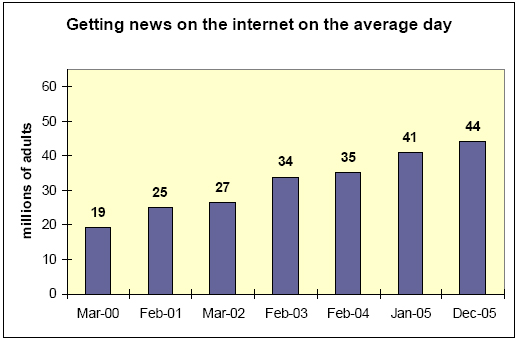 Some of this growth is due to an increase in overall internet penetration, which rose from 58% of adult Americans in March 2002 to 70% by the end of 2005. Some of the growth is undoubtedly a supply-side phenomenon. News organizations have made news sites more attractive and rich with content in recent years. The growth of online news sources such as blogs also may have lured more Americans to cyberspace for news. Furthermore, newspapers, radio broadcasts, and TV news now routinely push people to their websites for additional information about stories.

Consumption of online news is also supply-driven: news sites are more attractive and rich with content.

Another reason that more Americans are getting news on the internet is the advent of broadband (or high-speed) internet connections at home.3 In March 2002, 20 million Americans had broadband at home, compared with 48 million in February 2004 and 74 million by December 2005. Today, with 37% of adult Americans now have high-speed connections at home (compared with 23% with slower dial-up connections). Broadband has thus become the principal means of online access for Americans. Given that news has been a popular online activity for some time, it is no surprise that, for most Americans, having an “always on” connection increases their use on online news sites on the average day.

Broadband is now the principal means of Internet access for Americans.

We estimate that approximately 25% of the increase in online news consumption on the typical day from 2002 to December 2005 is attributable to higher home broadband penetration.4 About one-third of the growth is due to the expansion of the internet population over that time horizon, with the remainder being either unexplained by the model (18%) or a result of greater online experience in the internet population (26%). The latter effect may be capturing improvement in news content on the internet, as well as growing comfort with online news. People turn more often now to online news than they did four years ago because the offerings are more attractive and because they have formed online news consumption habits.

It is also the case that major news events create spikes in online news consumption. In the week following 9/11, 27% of internet users got news online (5 percentage points higher than late summer 2001 readings) and 37% of internet users were getting news online in the days following the invasion of Iraq in March 2003, 11 percentage points higher than figures from the prior month. People tend to dig in-depth into news stories online in the face of major events, and this may draw new people into the habit of going online for news. Some portion of the unexplained growth in online news over the past few years might reasonably be attributed to the effect of major news events.

News consumption on the average day varies between high-speed and dial-up users.

People with high-speed internet connections at home have different patterns of news consumption compared to dial-up and non-internet users. The table below shows the news sources American turn to on the typical day comparing all respondents, non-internet users, and online users with different home connection types. 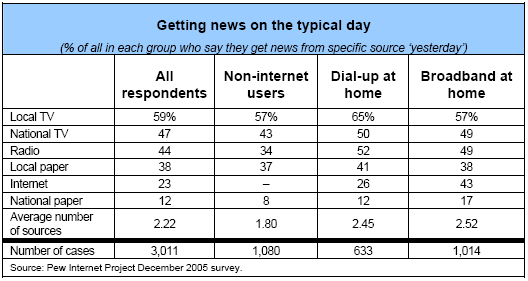 On the average day, 83% of Americans get news from at least one of the sources included in the survey, with most (56%) getting news from several (between 2 and 4 inclusive) sources. For the average American, TV remains the most popular news source, followed by the radio and the local newspaper. For home broadband internet users, TV and radio lead the way, but online news sources are on par with the local paper as a news source and rival national TV and radio.

TV and radio remain the most popular news source for Americans, but broadband internet users rely online sources as much as their local newspaper.

Explaining the differences across the categories of users can be complicated, given the interactions between age, education, technology use, and overall interest in the news. Non-internet users tend to be older, and advancing age generally tracks with greater interest in following the news. But non-internet users are less educated on average than internet users, and lower educational levels are also associated with less interest in news.

Demographic differences between dial-up and broadband internet users further muddies comparisons across types of news sources to which people turn on the average day. People with home broadband connections tend to be younger than dial-up users, and young people tend to have lower levels of interest in news. However, broadband users are also are better educated and have higher incomes, which correlate with higher rates of news consumption.

Most internet users continue to rely on a number of sources for news.

Looking at the data, a high-speed internet connection at home is clearly related to greater use of the internet for news; 43% of home broadband users seek out news on the internet on the average day compared to 26% of those with dial-up internet connections. On the face of things, however, this broadband effect doesn’t seem to result in any a greater frequency of turning to a wider range of news sources; dial-up and broadband users use about the same number of news sources per day. Because a variety of forces may act on users in different ways, the total number of sources may be less interesting than what influences the predilections of different subgroups to prefer one source to another.