For many home broadband users, the internet is a primary news source

Some 50 million Americans turn to the internet for news on a typical day, a new high-water mark for online news-gathering that coincides with rapid growth of broadband adoption in American homes.

Americans with high-speed internet connections at home are more likely than dial-up internet users to get news online on the typical day.

When asked in our December 2005 survey of 3,011 Americans if they turn to any of six possible sources of news on a typical day, respondents told us the following about their news consuming habits:

For broadband internet users, online news is a more regular part of the daily news diet than is the local paper; it is nearly as much of a daily habit as is getting news from national TV newscasts and radio. For home dial-up users, however, online news is not as much an everyday activity.

Online news takes center stage as a news source for 40% of broadband users — those who are most heavily engaged with the internet.

A consistent finding of the Pew Internet Project has been that home broadband users log onto the internet more frequently and do a wider scope of online activities on the average day than dial-up users. Since some broadband users are heavier users of the internet than others, we define as “high-powered” internet users those who do more online on the typical day than other home high-speed users. These high-powered broadband users are those who reported doing 4 or more things online “yesterday” (as compared the median 3 activities for all broadband users from the list of 10 online pursuits asked about in December 2005). Additionally, they are early adopters of broadband to the home and, as sophisticated demanders of online news, high-powered users are likely to shape how the online news market evolves.

These high-powered broadband users comprise 40% of the entire population of home broadband users and 44% of all internet users who get news on the typical day. They are better educated and have higher incomes than other Americans, and, as noted, they are part of an information-elite that shapes how delivery of news and information will evolve online. Among these high-powered users:

It is worth pointing out that 72% of these users report getting news from both local and national TV on the average day. Although the survey didn’t ask where respondents get most of their news, it is clear that, for a sizable and influential group of broadband users, the internet is a prime news source.

Approximately 25% of the growth of daily online news consumption since 2002 is attributable to the increase in home broadband adoption.

This number is derived by comparing what daily online news consumption would be at the end of 2005 if home broadband adoption was at 2002 levels—while holding constant other factors that predict news consumption, such as age, education, online experience, and other demographic characteristics.

Broadband is not the only thing behind the growing popularity of online news. Other factors driving the growth of online news include overall internet growth and increasing levels of internet experience.

Internet penetration generally has grown from 58% of adults in 2002 to 70% by the end of 2005; this accounts for an additional one-third of the increase in online news consumption.

Online experience is responsible for another 25% of the growth in daily online news consumption. Internet users, as they gain tenure online, are increasingly comfortable with the idea that they can consume news online.

Additional growth may be attributable to improvement in the quality of online news. Media industries have made their content more attractive to users over time, a supply side development no doubt driven in part by a demand side phenomenon; more users have the broadband connections that make richer online content easier to deliver.

A home high-speed internet connection influences news consumption in different ways for different people. One can imagine that an “always on” high-speed internet connection means some users might get news more often than they would if they had slow dial-up. For some, it may push out an “old fashioned” media source; for others, it may be a supplement to an established pattern of news consumption.

In terms of how the internet rearranges news consumption patterns more broadly, the impact is greatest for the “under age 36” age group. This age group is generally less news-hungry than older online users. They are particularly less likely to get news on the typical day from local TV, national TV, or local newspapers than older users. For broadband users, the only news source category where younger users trump older ones is for online news, although younger high-speed users are more likely to get news from a national paper than their counterparts in the age 36-50 group.

This suggests that, for younger home high-speed internet users, certain news gathering habits, namely reading a local daily newspaper and to a lesser extent watching local and national TV news, are not being formed – at least for some of them. But, relative to dial-up users in the same age group – a new newsgathering habit enters the picture for the “under age 36” cohort. And that is turning to the internet for news.

When asked where they go online for news—

Among all internet users, 22% report going to foreign or non-traditional news sites at least once, and 25% of broadband users say this. Here is the share of online users who have ever been to four such news sites included in the survey:

Online news consumers are willing to register for news, but are not willing to pay. 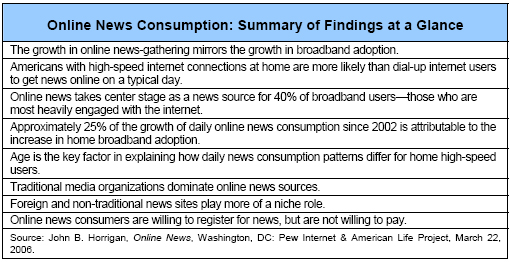