A broadband connection can affect daily news consumption in a variety of ways.

Since age is a strong predictor of interest in news and is a convenient dividing line, the table below helps sort through the different effects by dividing home high-speed and dial-up internet users by age and looking at their daily news consumption habits.

There are clear differences in patterns of news consumption across the different age cohorts of home broadband users. Among the generally less ardent news consumers in the under age 36 group, local TV is the most popular news source on a daily basis, clearly preferred to national TV, radio, and other sources. The internet trails local TV by a small margin that is not statistically significant, and the frequency with which online news is consulted is no different (statistically) from national TV or radio. Among those with high-speed connections at home and under the age of 36, the internet is very much at the center of how they get news on the typical day.

For older (over age 35) home broadband users, the internet occupies an important space in their daily news habits—about 41% turn to an online source on the average day—but traditional media, TV and radio especially, dominate how they get news.

Another way to assess broadband and news consumption across age categories is to compare the number of news sources consulted by home broadband and home dial-up users on the average day. As the chart below shows, for those under the age of 36, there is a gap in the number of news sources consulted on a typical day by users with different types of internet connections. Young broadband users, on average, consult more news sources on the average day than their dial-up counterparts. For older online users, there is no such gap. 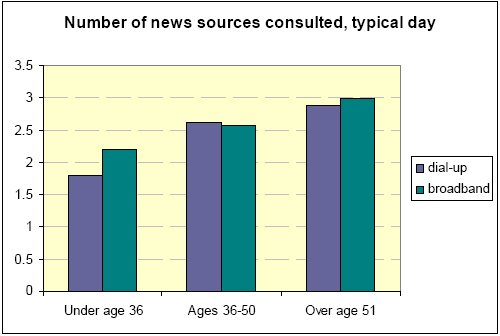 The data indicate that a home broadband connection shifts daily news consumption in different ways across age groups.4 The typical young person gets news from TV and radio, but is not very likely to subscribe to the local paper or, say, the New York Times. Give that person a broadband connection at home, and real differences emerge in comparison to a dial-up user of roughly the same age. The broadband user gets news from more sources, and most of the additional sources are accessed through the internet (though some are national newspapers).5 The dial-up user is getting news mostly from local TV and radio. For a young person, broadband’s impact is additive with respect to daily news consumption.

For older (over age 36) broadband users, online news plays a supplementary role in how they get news daily—filling out entrenched online and offline news habits but not adding many new sources. Both types of older high-speed users get news from traditional media sources, and although there is a modest shift away from local TV news and toward online news for broadband users, there is no difference in total number of news sources used on the typical day.

Finally, it is important to understand the magnitude of these effects. The findings for the under 36 age group affects a large share of them; nearly half (46%) of adults under age 36 have high-speed internet connections at home. For the 36 to 50 age group, 43% have broadband at home. Only 23% of people over age 50 have high-speed at home.