17% of internet users – about 23 million people – have sold something online; Visits to classified ad web sites have grown 80% in the past year

About 1 in 6 online American adults sell things on the internet. That amounts to approximately 25 million Americans. A nationwide telephone survey in September 2005 by the Pew Internet & American Life Project also shows that on a typical day, 2% of internet users sell something online.

Almost everything imaginable is currently for sale or has been for sale by individuals on various auction or classified ad sites. Tangible items like pink plastic Christmas trees, collectible coins, wedding dresses, automobiles, books, or CDs share web space with a myriad of intangibles including virtual weaponry and characters from online games (sold for real money) and services including everything from finding a French tutor, a personal trainer or someone to clean your aquarium.

Demographically, online sellers have an “early adopter” profile and they are relatively intense users of the internet. Here are the details:

The Pew Internet Project findings cited in this report come from a nationally representative telephone survey of 2,251 American adults (age 18 and older), including 1,577 internet users, between September 14-October 13, 2005. The margin of error on the internet user portion of the survey is plus or minus 3%.

Where are they selling online?

The Pew Internet Project September 2005 tracking poll found that 22% of online adults, or about 32 million Americans, have used online classified ads for selling items or for other activities.1 According to data from comScore Media Metrix, online classified ad sites as a whole had more than 26 million unique visitors in September 2005 – 80% growth from the previous September. The cluster of sites run by Craigslist were the most popular classified sites, drawing close to 9 million unique visitors that month.2 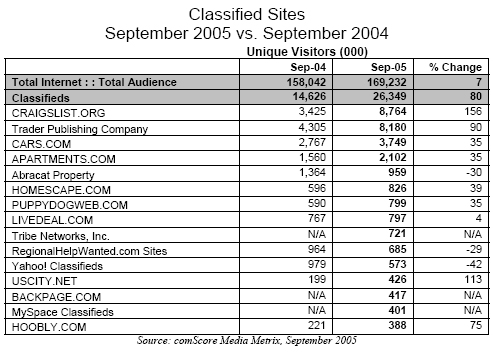 Nearly one in four (24%) internet users or 35 million people have participated in an online auction–selling or buying something. The 24% finding, from data gathered in the Pew Internet Project’s February-March 2005 tracking survey, reflects a steady increase in auction participation since Pew first asked the question in March of 2000, when 15% of internet users report that they had ever used an auction site. Over time, the daily use of auction sites has risen slightly, as approximately 2% to 3% of internet users use these sites on a typical day. While the percentage of the internet population visiting auction websites on a typical day is stable, the overall size of the internet population has grown, and thus the overall number of people visiting these sites has grown as well.

About 25 million people have used the internet to sell something
17% of internet users – about 23 million people – have sold something online; Visits to classified ad web sites have grown 80% in the past year
Questions and Methodology