In addition to asking respondents about their candidate preferences and the arguments for and against the candidate they support, we also wanted to probe how people use media sources to gather information about key policy questions. We asked respondents to tell us how important they considered each of five controversial issues: the decision to use military force in Iraq, free trade and its impact on American workers, and legalizing gay marriage, health care, and abortion.

If a respondent identified one of the first three issues as somewhat or very important, we followed up with a series of question about the topic. If a respondent said that multiple issues were important, we placed them into one of the issue categories and then posed questions related to that issue. This allowed us to make sure that the number of respondents for each topic was about even: 465 American adults answered questions about the situation in Iraq, and 512 answered questions about gay marriage and about free trade.

Some 53% of the respondents who responded to this part of the survey said they thought that the U.S. made the right decision in using military force against Iraq, 39% said they thought it was the wrong decision, and 8% were undecided.

People have heard most of the arguments for and against the war.

To measure their exposure to information, respondents were read eight statements, four supporting the war and four challenging it. The table below shows the percent of respondents who had heard these statements about the each issue either frequently or sometimes.

A typical respondent had heard 5.3 arguments related to Iraq frequently. If we also include arguments heard sometimes, a typical respondent was familiar with 7.1 arguments. On average, respondents were more familiar with the arguments supporting the decision to use military force in Iraq than against it. Looking just at those arguments they encountered frequently, they heard 2.9 arguments supporting the decision and 2.4 against it. Adding to this the arguments heard less often, they heard 3.8 supporting arguments, versus only 3.4 opposing arguments. Interestingly, this is a higher level of general public awareness than was evident in the presidential race. The average American was at least somewhat aware of nearly all the core arguments that were raging about the war in the spring of 2004. 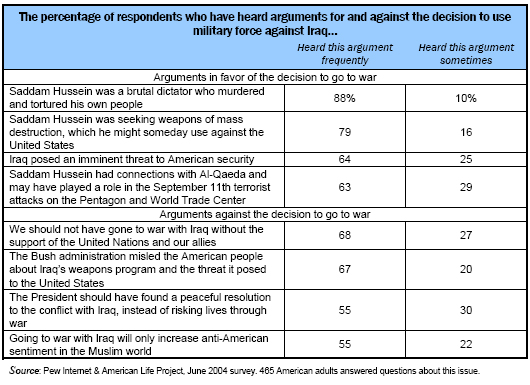 A respondent’s position on the issue was unrelated to overall exposure: supporters and opponents were familiar with the same number of arguments. As with exposure to arguments for the candidates, however, people with broadband connections at home were more likely than dial-up users to be exposed to all the arguments about the war that we tested.

There is wide exposure to arguments that challenge people’s positions on the war.

Examining the extent to which respondents had greater exposure to the arguments supporting their viewpoint about the war, we find that people’s familiarity with arguments regarding the situation in Iraq is an exception. In the case of arguments for and against the candidates, gay rights, and free trade, people tended to be more familiar with arguments that buttress their existing views. On the Iraq war, though, no matter what their viewpoint, respondents were more familiar with arguments justifying the decision to go to war than with those challenging it.

Respondents with broadband access typically had heard more arguments for both sides than those who share their point of view but don’t have broadband.

There are several factors, including internet use, that are tied to how many arguments people hear.

In order to separate the influence of internet use on issue exposure, it is again necessary to use regression analysis to control for a variety of correlated characteristics. These analyses mirror those used in the analysis of the campaign. They look first at overall issue exposure, and then look at exposure to arguments challenging respondents’ viewpoints.

Age, education, use of other news media, and open-mindedness were significantly related to exposure to arguments about the Iraq war. Older Americans and those who have more education are more familiar with arguments about the Iraq war than others, as are people who use television or newspapers to get news about the issue. On the other hand, people who say that they are quick to make a decision once they have gathered the relevant facts are familiar with fewer of the arguments than those who say they need more time to reach a conclusion.

Internet use was also associated with increased issue exposure overall. Controlling for other likely factors and other demographics, including party affiliation and overall news media use, internet users typically heard more arguments pro and con about the decision to go to war in Iraq.

There is an internet effect on the exposure people have to arguments that challenge their positions on the war.

In order to assess whether people are using the internet to avoid challenging information, we looked at respondents’ exposure to arguments opposing their viewpoint on the Iraq decision. In this case, this means that we looked at how exposed war supporters were to anti-war arguments and how exposed war opponents were to pro-war arguments. We wanted to find out if people are creating an environment in which they only encounter arguments that support their position.

In the analysis, a positive association between internet access and exposure means that users are encountering more information that challenges their viewpoint, while a negative association means they are encountering less. We found that the correlation was positive for supporters and opponents. We conclude that people are not using internet access to screen out or avoid exposure to views that challenge their position on the war.  To the contrary, people interested in Iraq are likely to use the internet to become more familiar with both sides of the debate.

There are four segments of the information “market” on the Iraq war.

As with the campaign, we have divided respondents who expressed an opinion about each of the issues into four categories based on their exposure to information supporting and challenging their viewpoint. Our definitions of Omnivores, Selective Reinforcers, Tuned Outs, and Contrarians are unchanged, but the characteristics of these groups vary.

Omnivores: Fully 77% of the respondents that we asked about the Iraq decision had extensive exposure to both sides of the issue. This is a much larger percentage than we saw for campaign arguments. We suspect that this reflects the high salience of this issue at the time of the survey, combined with the fact that we only asked people about the issue if they said it was personally important. Given how many people fall into this category, it is unsurprising that their characteristics look very similar to those of the whole sample.

Selective Reinforcers: Only 7% of those we asked about Iraq had high exposure levels to supportive arguments and low exposure to those that were challenging. Though similar to Omnivores in many respects, these individuals were less likely than omnivores to get news about Iraq online (14% versus 39%), and had lower educational attainment (19% had completed a college degree versus 27% of all Americans).

Tuned Outs: Individuals with limited knowledge about both sides of the Iraq debate constituted only 4% of the respondents. The characteristics most clearly differentiating this group from the population at large are that its members are less educated – only 7% of Tuned Outs are college graduates – and they are not online. About 50% of these individuals had internet access (versus 67% of all Americans), and only 8% had a broadband connection at home (versus 26% of all Americans).

Contrarians: Representing 6% of the people interested in Iraq, those who knew the majority of arguments against their position, but only a few that supported it were the least likely to follow the news. Only 20% read the newspaper on a typical day (versus 60% nationally), and only 11% get news related to Iraq online. The number of Contrarians watching TV news does approach the national average, though (75% versus 80%). Contrarians are also a more racial diverse group (55% whites, 32% blacks, and 13% English-speaking Hispanics), and predominantly (77%) female.

The Internet and Democratic Debate
Invasion of the Computer Snatchers
Arts Organizations and Digital Technologies
Cell phones and survey research
Defining generations: Where Millennials end and Generation Z begins
Are you in the American middle class? Find out with our income calculator
25% in U.S. see at least some truth in conspiracy theory that COVID-19 was planned
Key things to know about election polling in the United States
Public’s Mood Turns Grim; Trump Trails Biden on Most Personal Traits, Major Issues