Free trade is the least familiar of the three policy issues.

Unlike the other issues, respondents’ exposure to the two sides of the free trade debate was quite balanced. The typical respondent heard 3.0 arguments from each side. 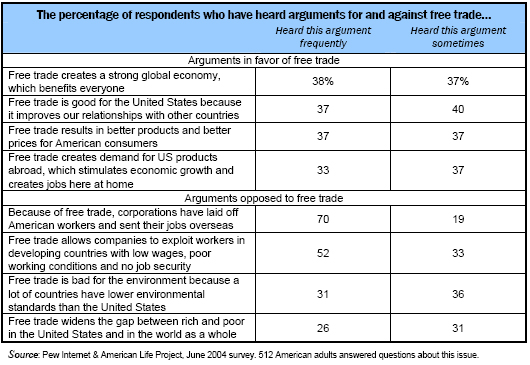 As with exposure to campaign information and information about Iraq, respondents’ attitude toward free trade had no significant effect on the average number of claims heard. The effect of internet access, however, was mixed. People with broadband access typically heard more arguments at least once in a while compared to those with dial-up, but dial-up users heard more arguments frequently than either broadband or non-internet users.

People are more familiar with arguments that back their views than challenge their views on free trade.

The typical respondent is more familiar with arguments supporting his or her viewpoint about free trade, matching our finding regarding the campaign and gay marriage. In contrast to the other analyses, however, there were no significant differences in exposure among respondents with different internet access.

The effects of openness on exposure to free trade exposure were generally as expected. People who said they like to hear about politics and world affairs were more likely to have heard most of the arguments than those who shy away from politics. Those who said they tended to be slow to make a decision even after gathering the relevant information had, however, heard less about free trade.

As in all other analyses, internet use was associated with increased issue exposure overall. Controlling for other factors, internet users were typically familiar with a greater number of arguments.

The segments of the information market on free trade

Omnivores: Of those who answered questions about free trade, 62% were Omnivores. As they were in the campaign analysis, Omnivores appear to be most technologically sophisticated. They are more likely than average to have internet access (72%), and to have a broadband connection (33%). They also tend to be better educated: 37% having completed at least an undergraduate degree.

Selective Reinforcers: This group, representing 21% of those responding to the free trade questions, was very similar to the population at large. Individuals in this category were, however, slightly less likely to read a newspaper (52%) or to have a college degree (21%).

Tuned Outs: The defining characteristic of Tuned Outs, who made up 13% of the sample, was their lower level of news media use. They were slightly less likely than average to get issue news from a newspaper (42%), TV news (76%), or online (10%).

Contrarians: Only 4% of those interested in free trade were Contrarians. Interestingly, free trade Contrarians were more likely than any other group to get online issue news (39%), even though they were still less likely than the average American to have broadband access (19%). These individual also had higher educational attainment than average, with 49% of respondents holding a college degree.

Next: Part 7. Conclusions and implications
← Prev Page
Page1Page2Page3Page4Page5Page6Page7You are reading page8Page9Page10Page11
Next Page →