Wired Americans hear more points of view about candidates and key issues than other citizens. They are not using the internet to screen out ideas with which they disagree.

The internet contributes to a wider awareness of political arguments.  Fears that use of the internet might hurt healthy democratic deliberation are not borne out by online behavior.

Increasing numbers of Americans are getting news and information about politics online. More than 40% of those who use the internet have gotten political material during this campaign, according to the Pew Research Center for The People & The Press, more than 50% higher than the number who had gotten such information in the 2000 campaign.

As internet use has grown, prominent commentators and scholars have expressed concern that this would be harmful to democratic deliberation. They worried that citizens would use the internet to seek information that reinforced their political preferences and avoid material that challenged their views. They feared that people would use internet tools to customize and insulate their information inputs to a degree that held troubling implications for American society. Democracy functions best when people consider a range of arguments, including those that challenge their viewpoint. If people screened out information that disputed their beliefs, then the chances for meaningful discourse on great issues would be stunted and civic polarization would grow.

The internet is contributing to a wider awareness of political views during this year’s campaign season.

At a time when political deliberation seems extremely partisan and when people may be tempted to ignore arguments at odds with their views, internet users are not insulating themselves in information echo chambers. Instead, they are exposed to more political arguments than non-users.

While all people like to see arguments that support their beliefs, internet users are not limiting their information exposure to views that buttress their opinions. Instead, wired Americans are more aware than non-internet users of all kinds of arguments, even those that challenge their preferred candidates and issue positions.

Some of the increase in overall exposure merely reflects a higher level of interest in politics among internet users. However, even when we compare Americans who are similar in interest in politics and similar in demographic characteristics such as age and education, our main findings still hold. Internet users have greater overall exposure to political arguments and they also hear more challenging arguments.

What do people know about politics and how they come to know it?

A primary objective of this research was to find out whether the internet is reducing the number of points of view that people hear about politics and public affairs, particularly arguments that are at odds with respondents’ beliefs. Such a research undertaking has to be grounded in the context of people’s overall media use, interest in politics, and other attitudinal and demographic factors. It is not sufficient, therefore, to ask people a question like this: “Do you use the internet to shield yourself against arguments that are at odds with your existing point of view?” Some people may do this, but they would not want to admit it, because most people like to say they are open-minded. Answers to these kinds of questions would not be trustworthy.

To avoid this pitfall, our survey was designed to examine the kinds of arguments people have heard about politicians and issues and to learn what communications and media channels they may use to gather such knowledge. For the presidential race, respondents were asked about their candidate preferences, and were read eight statements about the two major candidates; four statements were favorable to Bush and four were favorable to Kerry. In addition to inquiring about respondents’ internet use, the survey also asked about people’s media use, overall interest in the campaign, and open-mindedness. This allowed us to evaluate a more subtle question:

This approach is more reliable than just counting up the number of arguments people have heard about candidates and observing that internet users have heard more of them. That happens to be true. Yet it could be true not because people use the internet, but because internet users are more interested than others in politics, or because they have higher levels of education than others.

The real impact of internet use comes when statistical techniques are used to assess what portion of that truth can actually be tied to the internet, as opposed to other factors.

This further analysis shows that internet use predicts that people will have greater exposure to arguments that challenge their views.

These internet effects are independent of other things that also predict exposure to political information, such as advancing age, use of traditional media, or interest in the campaign.

Internet use is not the only factor associated with exposure to a wide range of political arguments. Education levels, interest in the campaign, and age are among the other factors tied to the number of points of view people encounter.

People’s degree of open-mindedness and their overall interest in the campaign are the largest factors relating to their exposure to challenging arguments.

Though these factors also shaped issue exposure, there were a few interesting variations.  For example, men knew less about gay marriage and more about free trade than women did on average.  The importance of community type also varied across issues.  People living in rural areas typically knew more about gay marriage, but were no different than those living in urban or suburban communities with regard to their exposure to the Iraq conflict or free trade.

The presidential campaign: People have heard arguments that Bush misled the country about the rationale for war and that Kerry is a flip-flopper on issues.

At the time of this survey, 44% of respondents favored President Bush and 39% supported Senator Kerry. Here were some of the notable findings

Respondents divide into four types when it comes to their exposure to arguments for and against their candidate.

Of the eight arguments people were presented about Bush and Kerry, the respondents said they had heard, either frequently or sometimes, an average of 5.2 of them. Internet use had a positive effect on the number of arguments they had heard. However, not all respondents are equally enthusiastic about finding out the arguments for or against the candidates.

People’s awareness on issues is different from their awareness about the presidential candidates.

On the three issues we probed, it was surprising to note that, in general, people had heard more about the issues than the candidates. This may be because we only asked people about issues that they said were important to them, while we asked every respondent about the campaign. Furthermore, in contrast to campaign exposure, in which respondents were equally likely to have heard arguments favoring Bush or Kerry, issue exposure was less balanced. People had generally heard more arguments favoring one position or another. For instance, respondents had heard more arguments for the Iraq war than against it, and more arguments against legalizing gay marriage than for it.

The evidence of selectivity in issue exposure is less consistent than with campaign exposure. Still, there is no indication in this survey that people are using the internet to avoid assertions that confront their views.

The Iraq war: People have heard assertions that Saddam Hussein was a brutal dictator and that Bush misled the public about the existence of weapons of mass destruction.

Some 53% of the respondents in this portion of the survey said they thought the decision to go to war was right and 39% thought it was wrong.

In this portion of the survey, 70% of respondents said they opposed gay marriage and 26% supported it.

Television is the primary news source for political information, but broadband users increasingly get their information online.

Three-quarters of all Americans (78%) say television is a main source of campaign news.  Some 38% of Americans say newspapers are a primary source; 16% say radio; 15% say the internet; and 4% say magazines. (These figures don’t add up to 100% because respondents were allowed to give up to two answers.) In addition:

Internet news is mostly used as a complement to more traditional media. Still, a large number of people have gone to non-traditional Web sites to get information.

People are not abandoning traditional news media for the internet.

The Web sites of major media organizations continue to dominate as sources of online news about politics and public affairs. But political news sites not associated with a major news organization are beginning to get a foothold for internet users, particularly those with broadband at home.

Some 24% of home broadband users are going to alternative online sources. Some 24% have visited the web site of an international news organization, and 16% say they have visited a more partisan alternative news organization’s site.  Use of these alternative sources is almost always accompanied by use of other more mainstream sources.  Nearly 100% of the users going to the alternative sites we asked about also use some other mainstream source. Again, this supports the idea that internet users, especially those with high-speed connections, are not organizing their searches to avoid arguments that would conflict with their views.

Taken together, 30% of all internet users have been to at least one of the four latter non-mainstream media sites. Notably, supporters of John Kerry are more drawn to non-mainstream sites than Bush supporters:

Most Americans prefer their news media sources to have no obvious bias. Yet, many others prefer news sources that either confirm their own views or challenge them. Surprisingly, almost as many prefer news that challenges their views.

Most Americans prefer their news straight, without an obvious point of view. However, about one-quarter of respondents say they like to get news from sources which conform to their political outlooks.

One of the surprises in the survey is the finding that a fifth of Americans (18%) say they prefer media sources that are biased and challenge their views, rather than reinforce them. 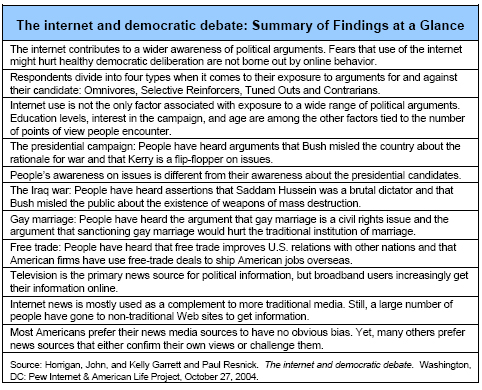