Television remains the dominant source of political news and information.

Television is the main source of news for Americans on the typical day. When asked whether they yesterday got news from a variety of sources, 74% of Americans said they got news yesterday from the television. The radio and newspapers come in next, with 54% and 51% of respondents, respectively, saying they got news from these sources. The table below shows the breakouts for all media sources asked about, comparing dial-up internet users with those with broadband connections at home.

Those with high-speed internet connections at home are more reliant on the internet for news on the average day than dial-up users. Broadband users have a more varied mix of news media than other respondents. Of the news sources we asked about, broadband users seek out about 3 on the average day, while dial-up users turn to 2.7 sources, and non-users try 1.7 sources.

For the first time in the research history of the Pew Internet & American Life Project, these data show that high-speed home internet users are more likely to turn to the internet than the newspaper on the typical day for news. In fact, when focusing on whether online Americans used either the web or email newsletters or listservs to get news, fully 64% of home broadband users use an online resource for news on the average day – nearly as many as use TV. Fully 42% of American internet users who go online from home have high-speed connections and it is clear that the internet is a news source of growing importance for this group.

When we probed specifically about news consumption for the 2004 presidential campaign, it is apparent how important TV is as a source of campaign news. When asked where they get most of their news about the presidential election campaign, three quarters of all respondents include TV as one of their top sources2, about 40% say newspapers, with radio and the internet trailing significantly. Our June numbers do not differ much from findings in a survey we conducted with the Pew Research Center for The People & The Press in January 2004. However, compared to our findings in January 2000, TV has seen its primacy chipped away somewhat while the internet’s prominence has grown.

Breaking the numbers down based on levels of internet use shows how reliant those with high-speed connections have become on the net for campaign news. Broadband users are about as likely to cite the internet as the newspaper as a main source for campaign news.

Though internet news is important to an increasing number of people, the vast majority of online news consumers continue to get news from newspapers and television, too.  Internet news sources are not rapidly displacing traditional news media.  Overall, 90% of those who got news online yesterday also used one of the older media types.  Furthermore, 99% of those who ever use online news got news from a traditional outlet at some time.  The kind of access people have at home is correlated with whether online news users also get news from other media on a typical day, but the effect appears fairly small.  Online news users with different kinds of internet connections are equally likely to use newspapers or television at least occasionally. 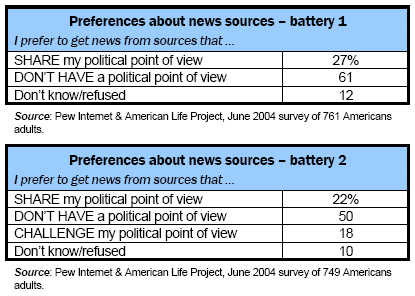 As the tables show, most Americans prefer their news straight, without an obvious point of view. However, about one-quarter of respondents say they like to get news from sources which conform to their political outlooks. When prompted, nearly one-fifth like to explore the other side of the argument; they like news that challenges their existing views.

There are some differences in the news sources people prefer when their relationship to the internet is considered. As the tables below show, non-internet users are less likely to prefer straight news and they have a tendency to seek out news that conforms to their political viewpoint. There is a small tendency on the part of home high-speed internet users to prefer straight news and no higher inclination on their part to be challenged by their news sources. So, broadband users are a bit less likely than others to prefer news sources that share their views. This is one modest indicator that broadband users might be less likely to use the internet to narrow their political information gathering because they are less interested in using media to confirm their views. 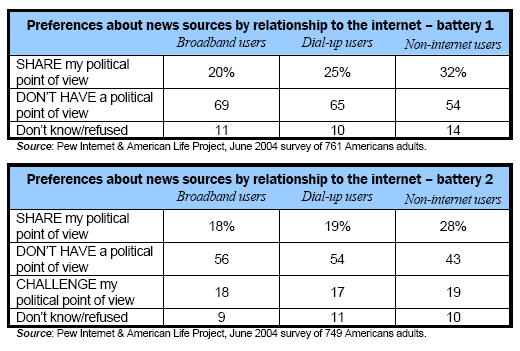 While it might come as a surprise that a quarter of Americans prefer news sources that share their political views, it is important to note that this figure has not changed much over time. When the question was asked by the Pew Research Center for the People & the Press in December, 2003 (without the option for respondents to say they like news that challenges their points of view), 25% said they preferred news that shares their political views, while 67% said they preferred news with no political point of view.  It does seem clear, however, that high-speed internet connections at home are not associated with any greater tendency on the part of respondents to seek out news sources that reinforce their points of view. In fact, the opposite is true.

People use a variety of Web sites to get political news and information.

The Pew Internet & American Life Project’s previous work with the Pew Research Center for The People & The Press has shown that internet users mainly go to Web sites of the mainstream media to get both general news and political news. The table below shows that this is largely the case from the June 2004 survey. Some 59% of all internet users have gone to sites of major news organizations and nearly three-quarters of home high-speed users have done that.

Still, for a sizable share of home broadband users, alternative sources of news about politics and public affairs play a role in their informational universes. Of the four alternative news sites that all respondents were asked about (an international news site such as al Jazeera, alternative sites such as AlterNet, politically liberal, and politically conservative sites), fully 30% of internet users have gone to at least one of these. Among internet users with high-speed connections at home, 36% have been to at least one of these sites. 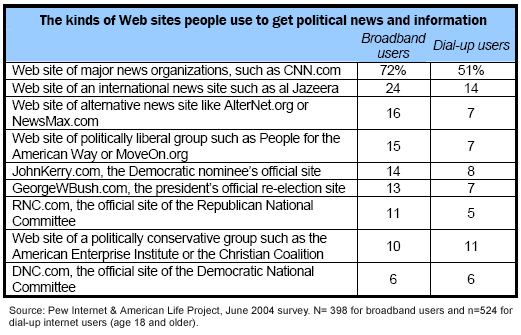 Use of partisan web sites complements use of mainstream sources.

Online partisan news sources are becoming more popular, but people are not abandoning the mainstream news media in favor of those sites. Of those who say they use alternate news sites, 92% also report using the site of a major news organization, and every person we talked to said that they also get news from at least one of three mainstream sources: TV news, newspapers, or major news organizations news sites.

Next: Part 3. Candidate information: The arguments people hear about Bush and Kerry
← Prev Page
Page1Page2Page3You are reading page4Page5Page6Page7Page8Page9Page10Page11
Next Page →