In our Internet tracking survey in February, we recorded our highest readings ever on the number of Internet users who are e-shoppers, the number who participate in online auctions, and the number of Americans who use computers. In addition, we got our first reading ever on wireless connectivity.

The results reported here come from a national phone survey conducted between February 3 and March 1, 2004. Some 2,204 adults (those 18 and older) were interviewed, of whom 1,371 were Internet users. The margin of error is plus or minus two points for the full sample and plus or minus three points for results drawn from the Internet user population.

The Pew Internet & American Life Project is a non-profit, non-partisan research organization funded by the Pew Charitable Trusts to examine the social impact of the Internet. It does not advocate any policy outcomes.

More material from the February survey

73% of U.S. adults say they use a computer at work, at school, at home, or some other place. This is the highest reading ever found by the Pew Internet & American Life Project. 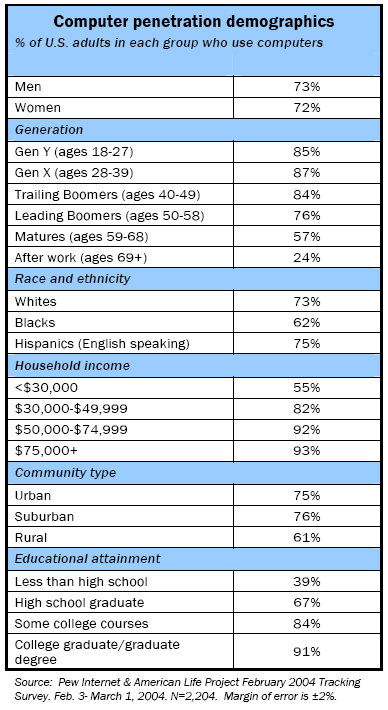 63% of U.S. adults use the Internet. That amounts to 128 million people. There has been some modest growth in the Internet population since the end of 2003, when roughly 60% of adults said they were Internet users. 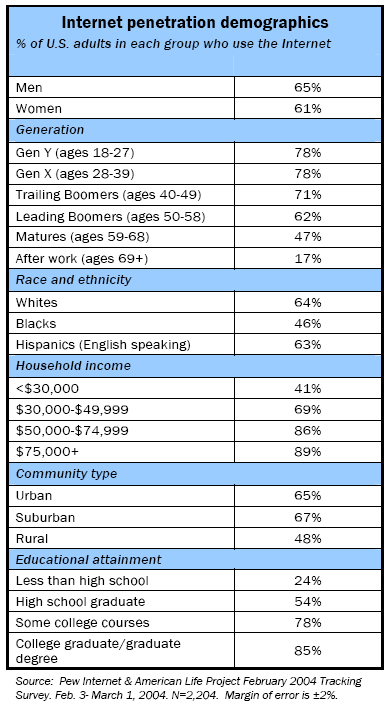 FREQUENCY OF USE OF THE INTERNET

2% say they go online less often than that

4% did not answer the question

More than half of online Americans (53%) have used the Internet for six years or longer. This large veteran cohort is the most likely to use the Internet frequently, to have broadband connections, to do every type of online activity. Experience is one of the strongest indicators of a person’s online behavior and his attitudes about the relative importance of the Internet in his life.

(We did not ask it in this survey, but in the past we have found that 23% of Internet users go online from some place other than work or home, such as a school, library, friend’s house, or cyber café.)

17% of Internet users have logged on using a wireless device. This is the first reading we have ever gotten on this subject and it means that more than 21 million people have used wireless connections to access the Internet.

Members of Gen Y with their Internet-connected mobile phones and WiFi-enabled laptops are the most likely to have a wireless connection. Some 28% have logged on to the Internet this way.

As in the case of other technologies, those with resources and education are more likely than other Internet users to have gone online wirelessly.

A full accounting of our latest readings on Internet activities can be found at https://www.pewresearch.org/internet/reports/chart.asp?img=Internet_Activities_3.22.04.htm (for the things that Internet users have ever done online) and https://www.pewresearch.org/internet/reports/chart.asp?img=Daily_Activities_3.22.04.htm (for the things that the Internet users do on a typical day online).

In our February survey, these are the highlights:

Below are some figures that show growth in online shopping in certain populations and a narrowing of the differences between groups of Internet users. In each case, the size of each population grew substantially in the intervening three years, so the higher percentages relate to even greater base line populations:

23% of Internet users participate in online auctions. This is the highest reading we have ever recorded on Internet auction participation.

70% of Internet users get news online.

51% of Internet users do work-related research online, not including their use of email.