How online Americans have used the Internet to learn war news, understand events, and promote their views

In the first six days after hostilities began in Iraq, the Pew Internet & American Life Project joined with the Pew Research Center for The People & The Press to survey Americans about their views about the conflict, how they were getting news about it, and the impact of developments on them. This report discusses how the Internet has grown as a news source for millions, how supporters and opponents of the war are using the Internet differently and how Americans are using email to debate, express concerns and show their patriotism.

More than three-quarters of online Americans (77%) have used the Internet in connection with the war in Iraq. They are going online to get information about the war, to learn and share differing opinions about the conflict, to send and receive emails where they ponder events, express their views and offer prayers. In addition, a smaller portion of Internet users are using email to mobilize others and gain support for their views about the conflict. 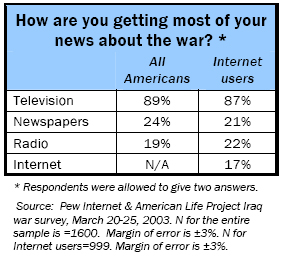 In all, 55% of the nation’s 116 million adult Internet users have used email in one way or another to communicate or learn about the war and 56% have used the Web to get news, general information, and commentary on countless Web sites that have war related material and argument.

About one in seven Internet users (14%) say they are going online more because of the news. War opponents are slightly more likely than supporters to report intensified Internet use. For instance, they stayed online somewhat longer during a typical day in the early period of the war.

TV still rules the news world, but the online news audience jumps to record levels. Reliance on the Internet is many times greater than after the 9/11 attacks

The overwhelming majority of Internet users are using TV to get most of their war news. In fact, of all the major forms of media, the Internet is last on the list of ways that online Americans are getting most of their news. Still, 17% of online Americans say their principal source of information about the war is the Internet and that number is considerably higher than when we asked questions about how Americans were getting their news immediately after the 9/11 terror attacks. At that time, only 3% of online Americans said the Internet was their primary source of information about the attacks on the World Trade Center towers and the Pentagon and the aftermath of the attack.

In addition, the size of the online news audience has jumped dramatically beginning in the period just before the war began on March 19 and in the immediate days after hostilities were started. On each of the five days after the war began on March 19, more than 33% of U.S. Internet users went online to get news. And online news interest was even higher in the days immediately before the war broke out: 37% of online Americans were getting news on a typical day. This is a substantial increase from the usual online news audience; we have previously found that 24%-26% of Internet users got news on a typical day. It is also the first time in the three years of polling done by the Pew Internet & American Life Project that more than 30% of Internet users were gathering news online during a typical day.

At the same time, we do not see a diminishing of other online activity at the outset of the war. Typical Internet use has not changed – roughly the same number of U.S. Internet users are going online during a typical day, they are spending about the same amount of time online and they are doing other online activities at approximately the same rates. This is different from the period right after 9/11, when there were generally fewer people online on any given day and they were not nearly as likely to be doing online browsing for fun or shopping.

The general sentiments of Internet users

Email and the war

Fully 55% of online Americans have used email in connection with the war. (A full table of the activities we measured is below.) As a rule, the most fervent veteran Internet users (those who have high levels of education and income and several years of online experience) have been the ones most likely to send email of all kinds. Whites are somewhat more likely than minorities to use email for matters related to the war after the fighting broke out, but there were not notable differences between racial and ethnic groups in the pre-war period. Online men were more likely than women to use email to get news alerts. Online women were more likely than men to use email for prayer requests, to discuss the war with family members. 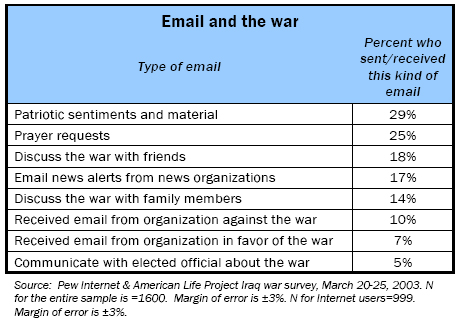 Use of the Web and the war

In all, 56% of American Internet users have gone online for some kind of information and news about the war or to become involved in a more direct way. Many are using their Internet connections to keep abreast of war developments, perhaps because this is the most convenient way for them to catch up on headlines during the day or because they are not immediately able to turn on a TV or radio.

Some 45% of Internet users got news about the war in the initial days of the conflict. Reflecting our longstanding observation, online men were more likely than women to be news-seekers. Further, Internet users from upscale groups with high levels of education and income were more likely to seek news online than those with less income and lower levels of educational attainment. Broadband users were also much more likely than dial-up users to go online for information and news about the war. Some 70% of those with broadband connections used the Web for war-related searches, compared to 58% of dial-up users who used the Web for those purposes. 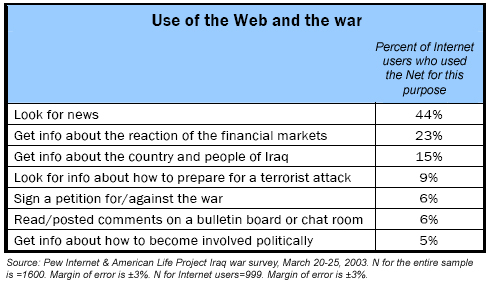 The sites they use 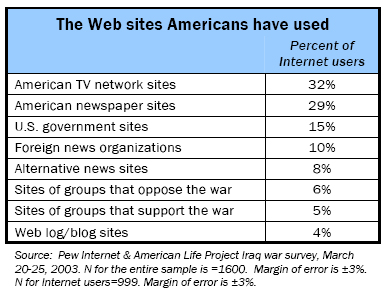 There has been much early discussion about the role of blogs or Web diaries in shaping opinion about the war and allowing Internet users to gain new perspectives and sources of information about the war. Our first soundings on the subject show that blogs are gaining a following among a small number of Internet users, but they are not yet a source of news and commentary for the majority of Internet users. Some 4% of online Americans report going to blogs for information and opinions. The overall number of blog users is so small that it is not possible to draw statistically meaningful conclusions about who uses blogs. The early data suggest that the most active Internet users, especially those with broadband connections are the most likely to have found blogs they like. In addition, blogs seem to be catching on with younger Internet users – those under age 30 – at a greater pace than with older Internet users.

Why Americans go online for news 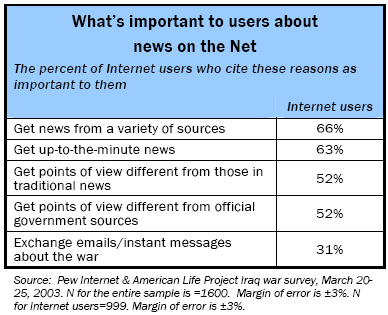 How the Internet helps

Some 20% of online Americans say the Internet has helped them make their views about the war known to others. Again, war opponents are more likely than supporters to cite this benefit from going online. And the most fervent Internet users are more likely to say this than those who are less active online.

Finally, 6% of all Internet users say something they learned online has changed their opinion about the war. The number is so small that there is no way to draw statistically significant conclusions from a closer examination of the group that said it had changed its mind based on information available on the Internet. It appears that more war opponents than supporters said that Internet information helped change their mind. Users who did not complete high school were more likely to be swayed than those with higher levels of education and younger Internet users were more likely than older users to say “yes” to this question.

The online world vs. the traditional world

This modest level of sentiment that the online world is different applied to even the most obvious Internet partisans. These are the same people, though, who frequently say the value of the Web is that they can find a variety of points of view. Just 21% of the most active Internet users – those who are online every day, those who have more than six years of online experience, and those with broadband connections – said the online environment exposed them to more points of view that other media. About a third (34%) of those who said they are relying most on the Internet for news said the Internet is different from traditional media. War opponents were somewhat more likely than supporters to believe the Internet gave them alternative points of view from those in traditional media.

Next: The differences between war supporters and war opponents online
← Prev Page
You are reading page1Page2Page3
Next Page →

The Internet and the Iraq war
How online Americans have used the Internet to learn war news, understand events, and promote their views
The differences between war supporters and war opponents online Methodology