War opponents and supporters are going online for different purposes and with different results during the early days of the conflict. They also have diverging views about the role the Internet is playing in their lives. As a rule, war opponents use email and the Web for a variety of purposes and they are more appreciative of the benefits of the Internet use than those who support the war. War opponents are more politically active online, more anxious to discuss the war, and more likely to seek out a variety of sources of information about the war. The results are in the table below: 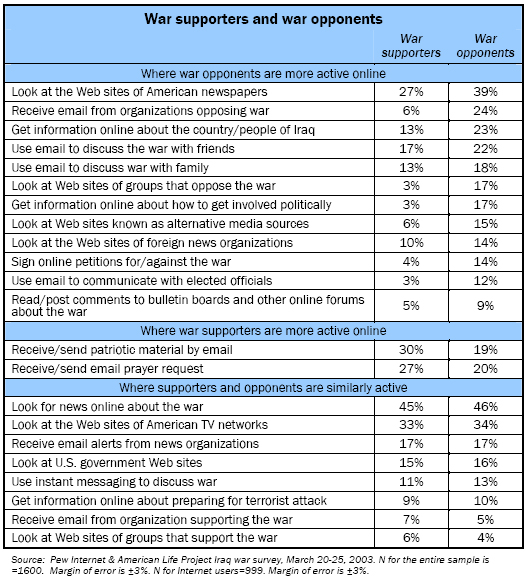 Not surprisingly, online war opponents are more likely than war supporters to be skeptical of the way war information is being disseminated by the U.S. military and less confident that the mainstream press has done a good job covering the war. Asked about several possible reasons people might get information online, war opponents were more likely than supporters to say they prized the benefits of being online.

Asked about activity in online discussion groups and email lists, online war opponents were more likely than war supporters to report discussion about the conflict. Overall, 14% of Internet users said their online groups had devoted some time to discussing the war. Almost a quarter of the wired war opponents (23%) said their online groups were discussing the war, compared to 12% of wired war supporters.

Different impacts of Internet use

Despite these differences, there is striking similarity between war supporters and opponents in their general Internet use. Both go online at roughly the same rates and there is no difference between them in how they are relying on the Internet to get basic news about the war. The one modest difference between them is that war opponents are a bit more likely to spend several hours online during a typical day that war supporters are.