By the staff of the Pew Internet & American Life Project

The September 11 terror attacks on the World Trade Center and the Pentagon were the most seismic news events in the Web era. They dominated people’s thoughts and their actions online like no other event before them.

One of the most important and potentially long-term impacts of the 9/11events and their aftermath is how they compelled government officials and ordinary Americans to consider what kinds of information should be made available online. As a rule, and in many cases by the dictates of law, much of the information that government collects about American manufacturers, utilities, and transportation firms is made public. But after 9/11, the creators of various government Web sites chose to remove sensitive information that could potentially be useful to terrorists.  This included information such as emergency response plans for chemical plants, GIS data, detailed maps and descriptions of nuclear facilities, reports on chemical transportation security, and information on water supplies.  According to information gathered by OMB (Office of Management and Budget) Watch, a non-profit that promotes government accountability (www.ombwatch.org), 13 government agencies and three state Web sites have prevented access to information that was previously available to the public online:

In addition, The Washington Post reported on October 4, 2001 that the Centers for Disease Control and Prevention, housed under the Department of Health and Human Services, removed a report on chemical terrorism from their Web site.2

These actions coincided with a memorandum issued on October 12, 2001 by the Attorney General, John Ashcroft, that urged federal departments and agencies to “carefully consider” the disclosure of sensitive information under the Freedom of Information Act (FOIA) and assured them that any decisions to withhold records would be defended by the Department of Justice unless they “lack a sound legal basis.”3 Such exemptions from the FOIA were also encouraged in a memo issued by White House Chief of Staff, Andrew Card, on March 19, 2002, that called for an immediate re-evaluation of any classified, reclassified, declassified or “sensitive but unclassified” material whose disclosure could prove to be harmful.4

In some cases, these assessments resulted in the removal of isolated documents; in others, it meant shutting down entire Web sites.  The U.S. Geological survey, for example, pulled several reports on water resources from its Web site, while the Web site for the National Transportation of Radioactive Materials at the Department of Energy was completely removed.5 Although some information on agency Web sites was only removed temporarily, much information has remained restricted.

Americans’ views about what government agencies should post online

Citizens are sharply and evenly divided on the question of whether the government should be able to monitor people’s email and online activities. By a 47%-45% margin, Americans believe the government should not have the right to monitor people’s Internet use. There was a distinct split between Internet users and non-users in answering that question. Internet users opposed such monitoring by a 9-point margin, and non-users supported the idea of government monitoring by a 10-point margin. 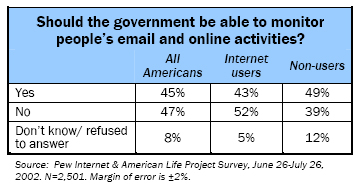 In general, Americans have different views about the value of different kinds of information on government Web sites. They generally support the idea of the government providing information about clearcut, immediate threats – for instance, pollution and sex offenders – and about information that is important to the political process such as campaign contributions. But they are much more wary of the government providing information that seems personal (property tax records, marriage and divorce records) or that might aid people who are planning to do harm. 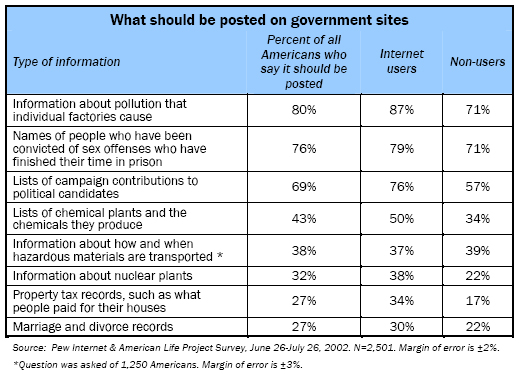 We pressed those who favored disclosure about some kinds of information whether their views would change if the government argued that this information could help terrorists. Many then supported the idea that such information should be removed from the Internet:

The difference when information relates close to home

We asked some of our respondents whether it would be a good thing or a bad thing to have information posted on the Internet about how and when hazardous materials are transported through their communities. By a nearly 3-2 margin (57%-34%) they said it would be a good thing to post such material and there was very little difference in the beliefs of Internet users and non-users.

What Internet users have changed in their online behavior

The attacks on the World Trade Center and the Pentagon have influenced the way that some people use the Internet to communicate with others and to gather information from key online resources. 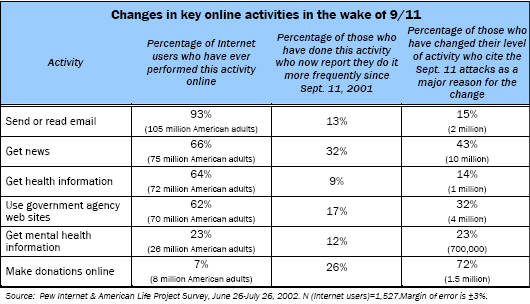 These patterns of increased Internet use in some activities also reflect broader trends we have seen in online behavior we have charted separately and apart from 9/11. Our July 2002 survey shows increases in most of these online activities, compared to survey data gathered last fall.

The September 11 crisis spurred a significant number of Internet users to reconnect with old friends, family members, and colleagues from their past. One in six email users (17%) report that in the weeks after the terror attacks they sent an email to someone with whom they had not been in contact for several years. That amounts to 19 million American adults who used email to reestablish connection with someone important from their past. And the vast majority (83%) of those who reached out have maintained their ties to those long-lost companions from their past.

The impact of 9/11 on overall Internet use

Since the attacks, about 8 million more Americans have gone online for the first time and the overall number of adult Americans who use the Internet has grown to 113 million.

Life is “far from normal” for 11% of Americans

The majority of those who say their own lives were dramatically affected at the time of the attacks are still coping with the change. In all, 11% of Americans say that life is still far from normal since the 9/11 attacks.  Of that group, half use the Internet.

Compared to other Internet users, these hard-hit Americans are more likely than other Internet users to have used email, instant messaging, and Web sites to connect to their family, their friends. Hard-hit Americans are also more likely than other groups to say email should be monitored if it would prevent future terrorist attacks.

In the days following 9/11, 30% of hard-hit Internet users sent email to people they had not been in contact with for several years, compared to 14% of Internet users who say life is back to normal.  Of those who sent emails last September, 90% of hard-hit respondents say they are still in touch with those people through email or in other ways, compared to 79% of respondents who say life is back to normal.

Those who say life is far from normal are more likely than others to back government decisions to remove information from the Internet. And 52% of hard-hit Americans think the government should monitor email to prevent terrorism, compared to 43% of those who say their lives are back to normal (and 45% of all Americans).

About a tenth of Internet users say they have started doing some things online that they would have done offline before the terror attacks occurred. The list is compiled in the table below: 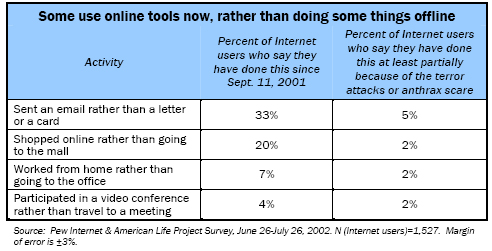 How Americans plan to commemorate 9/11

The first anniversary of the terror attacks will be a national time of mourning, solemn patriotism, and policy debate. Virtually every American plans to do something to remember the events of 9/11, honor the victims, and/or pay tribute to those involved in the rescue and recovery work. Some plan to perform acts of civic participation, too.

This report is based on the findings of a daily tracking survey on Americans’ use of the Internet. The results in this report are based on data from telephone interviews conducted by Princeton Survey Research Associates between June 26 and July 26, 2002, among a sample of 2,501 adults, 18 and older.  For results based on the total sample, one can say with 95% confidence that the error attributable to sampling and other random effects is plus or minus 2 percentage points.  For results based on Internet users (n=1,527), the margin of sampling error is plus or minus 3 percentage points.  In addition to sampling error, question wording and practical difficulties in conducting telephone surveys may introduce some error or bias into the findings of opinion polls.

New sample was released daily and was kept in the field for at least five days. This ensures that complete call procedures were followed for the entire sample. Additionally, the sample was released in replicates to make sure that the telephone numbers called are distributed appropriately across regions of the country. At least 10 attempts were made to complete an interview at every household in the sample. The calls were staggered over times of day and days of the week to maximize the chances of making contact with a potential respondent. Interview refusals were recontacted at least once in order to try again to complete an interview.  All interviews completed on any given day were considered to be the final sample for that day. The response rate on this survey was 38%.

Non-response in telephone interviews produces some known biases in survey-derived estimates because participation tends to vary for different subgroups of the population, and these subgroups are likely to vary also on questions of substantive interest. In order to compensate for these known biases, the sample data are weighted by form in analysis. The demographic weighting parameters are derived from a special analysis of the most recently available Census Bureau’s Current Population Survey (March 2001). This analysis produces population parameters for the demographic characteristics of adults age 18 or older, living in households that contain a telephone. These parameters are then compared with the sample characteristics to construct sample weights. The weights are derived using an iterative technique that simultaneously balances the distribution of all weighting parameters.

Next: Part 2. The Web after September 11
← Prev Page
Page1You are reading page2Page3Page4Page5Page6Page7Page8
Next Page →