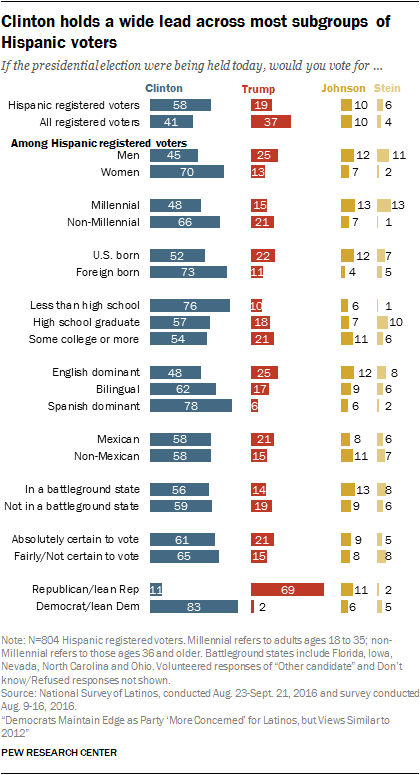 Clinton holds a 78% to 6% lead over Trump among Hispanic voters who primarily speak Spanish, and a 62% to 17% lead among those who are bilingual. However, among Hispanic registered voters who are English-dominant just 48% back Clinton while 25% would vote for Trump.

Among Hispanic registered voters, Clinton holds a wider margin among Catholics (69% vs. 15%), than among Evangelicals (47% vs. 34%). Hispanic voters who are religiously unaffiliated also show less support for Clinton than Catholics, but lean more toward third party candidates than toward Trump (47% for Clinton, 7% for Trump, 20% for Johnson and 17% for Stein).

A portrait of Hispanic Clinton supporters and Hispanic Trump supporters 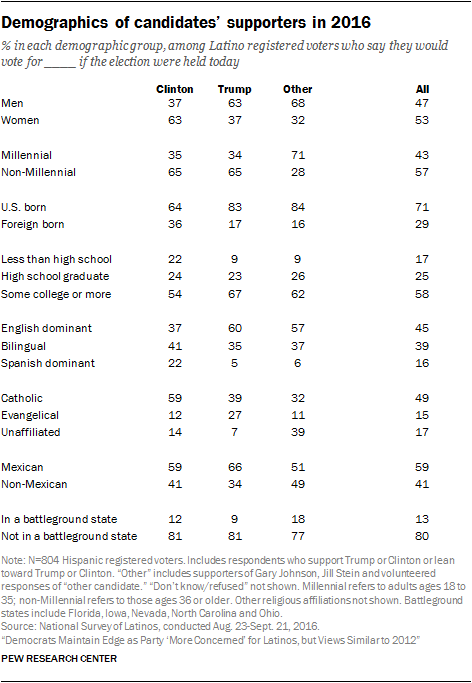 For many Hispanic voters, their vote is a vote against the opposing candidate

Large shares of Trump’s Hispanic supporters and Clinton’s Hispanic supporters view their choice as more of a vote against the opposing candidate than an expression of support for their candidate. This is similar to a pattern seen among all U.S. registered voters in a recent Pew Research Center survey of U.S. adults.

Hispanic Clinton supporters who are primarily Spanish speakers are less likely to see their vote for Clinton as a vote against Trump (30%), while those who are English dominant or Bilingual are more likely to say that their vote is against Trump (49% and 47% respectively).

Clinton supporters with less than a high school degree are also less likely to say their vote for Clinton is more against Trump (32%), than those with either a high school diploma (46%) or some college education or more (48%).

Rhetoric about Hispanics frequently has surfaced in remarks by Trump, beginning with the day he announced his candidacy. Seven-in-ten Hispanics say they have talked to family, coworkers or friends about Trump’s comments regarding Hispanics and other groups. This share is slightly higher among Hispanic adults who are registered to vote (75%), compared with those who are eligible to vote but are not registered (61%).

Discussion about Trump’s views with family, coworkers or friends is more common among Hispanic voters who have some college education or more, while it is lower among those with a high school diploma or less (83% vs. 63% respectively).

Hispanic voters of non-Mexican origin are just as likely as those of Mexican origin to have discussed Trump’s views with friends or colleagues (72% and 77% respectively), despite the particular focus of Trump campaign on Mexican immigrants.

Trump’s rhetoric not necessarily a liability among Hispanic voters

Among Hispanic adults, those who have talked about Trump’s views of Hispanics and other groups are more engaged in the election – and more likely to favor him over Clinton.

Next: 3. Views of the nation’s direction and 2016’s top issues
← Prev Page
Page1Page2You are reading page3Page4Page5Page6Page7Page8
Next Page →

Democrats Maintain Edge as Party ‘More Concerned’ for Latinos, but Views Similar to 2012 1. Latino voter interest and engagement in 2016
2. The Latino vote in the 2016 presidential election
3. Views of the nation’s direction and 2016’s top issues 4. Latinos and the political parties Acknowledgements Methodology Appendix A: References