The Pew Research analysis finds that population trends varied from 2007 to 2011 among the six states that are home to most of the nation’s unauthorized immigrants—California, Florida, Illinois, New Jersey, New York and Texas. (As explained in the Overview, individual estimates for other states are not available and will be provided in a later report.) 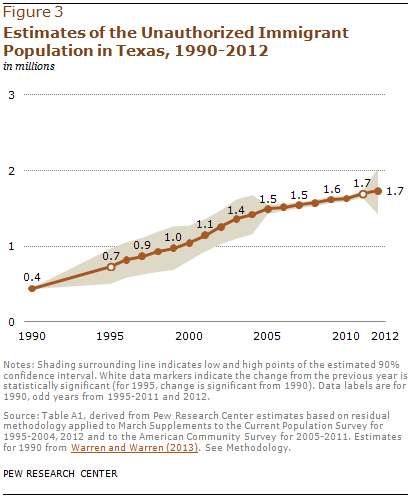 One state—Texas—had increases but no decreases during the 2007-2011 period compared with 2007, continuing its overall increases over the previous decade and a half. The remaining five states (and the combined total for the rest of the country) each had increased to a peak value in 2007 but then experienced declines. After the initial drop, two states—Florida and New Jersey—had increases in 2007-2011. Three states—California, Illinois and New York—had only declines during this period. The remaining states, as a group, showed a slight decrease by 2009 but no other significant changes.

As stated earlier, data limitations for 2012 make it difficult to draw conclusions about change from previous years. For all six states, there are no statistically significant differences between the estimates for 2012 and those for 2007, 2008, 2009, 2010 or 2011. However, discernible differences exist between 2011 and previous years. Because the much larger sample size for 2011 permits us to make stronger statements than for 2012, this analysis will focus most on the years 2007 to 2011. When the 2012 ACS becomes available, it may be possible to make more definitive statements about differences between 2012 and other recent years. 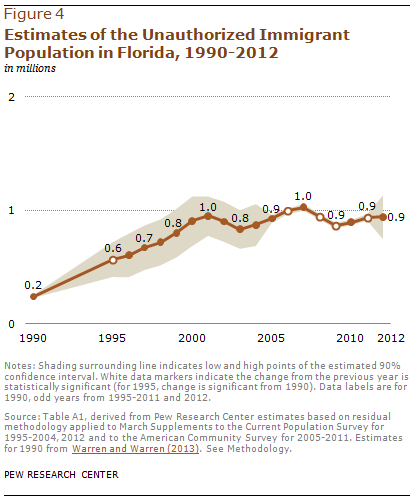 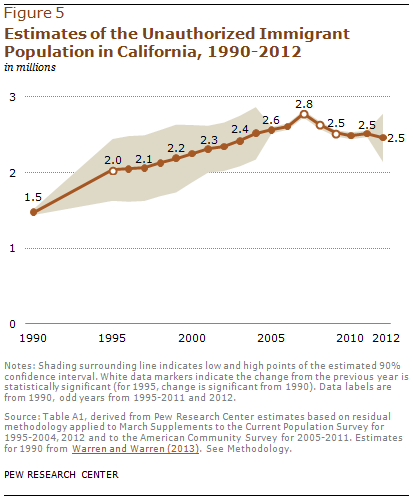 California, New York and Illinois had declines in their unauthorized immigrant populations in recent years, but no increases after that.

As a group, the remaining states had steady annual increases in their unauthorized immigrant population, which reached 4.75 million in 2007. This growth stopped abruptly after 2007, and by 2009 the number had dropped to 4.55 million. Since then, there has been no statistically significant change in the numbers.

Most of this reduction in share in the largest states is due to a sharply reduced proportion in California. The Golden State had 21% of unauthorized immigrants in 2012, compared with 42% in 1990. Illinois and New York had small declines in their shares of all unauthorized immigrants. The other three states had modest increases.