Immigration from Mexico to the U.S., especially unauthorized immigration, began to drop off in mid-2006, and that pattern has continued into 2009, according to population surveys in both countries and U.S. enforcement data.

By the period spanning March 2008 to March 20093, the estimated annual inflow of immigrants from Mexico—about 175,000 as estimated from the Current Population Survey—was lower than at any point during the decade and only about half of the average for the previous two years (Table 2).

Although the changes over time are similar to those shown in the CPS, the flow levels reported by the Mexican survey are quite a bit higher because the two surveys are not measuring the same group of migrants. The CPS is designed to measure people whose principal residence is in the U.S. and who are settled on a long-term or permanent basis. The Mexican survey, meanwhile, provides estimates for a broader group of migrants. They include Mexicans who come to the U.S. for short periods and may return home within weeks or months. Some people counted as leaving Mexico in one quarter may be included in the count of returnees in a subsequent quarter. Those “circular” migrants may not appear in the CPS.

ENOE, the Mexican survey, measures migration flows on a quarterly basis, but because migration to and from the U.S. is highly seasonal, it is not appropriate to track quarter-to-quarter changes in the number of Mexicans leaving for the U.S. However, annual data show that number of people leaving Mexico has declined each quarter on a year-to-year basis.

Apprehensions by the U.S. Border Patrol of Mexicans attempting to enter the United States illegally show a pattern very similar to that in the CPS and ENOE data. The number of apprehensions declined by about one-sixth from fiscal 2006 to fiscal 2007 followed by a similar percentage decline in 2008. By fiscal 2008, the number of Mexicans apprehended by the Border Patrol—662,000—was 40% below the mid-decade peak of 1.1 million in 2004. 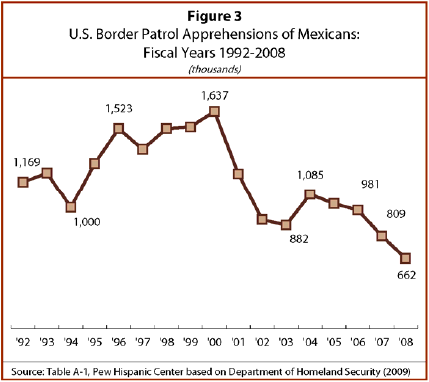 The Border Patrol attempts to stop illegal entries to the U.S. and does not generally apprehend unauthorized immigrants who are leaving the country, so the data address only inflows to the U.S. Nonetheless, the apprehensions data provide an indicator of the magnitude of the flow across the border that tends to rise and fall with the number of successful entries and with immigration levels. The record year for apprehensions was 1986, just before enactment of the Immigration Reform and Control Act, which allowed several million unauthorized immigrants to legalize their status and instituted stricter enforcement.

These data do not address the reasons for the drop in apprehensions. A Department of Homeland Security fact sheet suggests that the decrease could be due to factors including the weakened U.S. economy as well as stepped-up border enforcement. The threat of being caught could discourage some would-be immigrants from attempting to enter the U.S. Some scholars suggest that stepped-up enforcement also could discourage unauthorized migrants from leaving the U.S. for home visits, because they would risk capture when they tried to re-enter.

Next: Appendix A: Additional Figures and Table
← Prev Page
Page1Page2You are reading page3Page4Page5
Next Page →