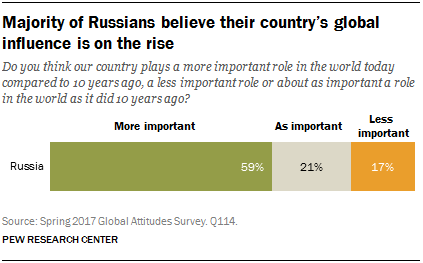 Most Russians believe their country’s global influence has risen. A 59% majority believes that Russia now plays a more important role in the world than it did a decade ago, while only 17% think Russia is now less important. About two-in-ten (21%) think its importance has not changed in the past decade. Russians ages 50 and older are more inclined to believe Russia’s importance has grown (63%), compared with 48% of 18- to 29-year-olds.

The share of Russians who believe their country gets the respect around the world it deserves has more than doubled over the past five years. Whereas only 16% in 2012 felt Russia was as respected around the world as it should be, that figure now stands at 34%. Even so, the prevailing view remains that Russia should be more respected than it is.

Russians are also becoming less nostalgic for the past. Since 2015, the share of Russians who view the fall of the Soviet Union as a good thing has almost doubled, jumping from 17% to 31% today. Still, a 59% majority sees the fall of the USSR as a bad thing for Russia. 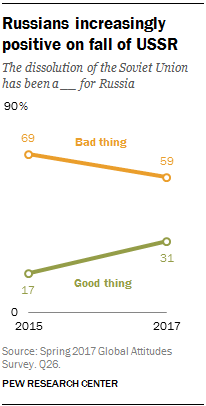 There is a strong generational divide on views of the end of the Soviet Union. Those 50 and older overwhelmingly see this event as having been a bad thing for Russia (73%). But the youngest generation is less sure: More than a third (37%) say the end of the USSR has been a good thing for their country and another 19% have no opinion on the matter.

More than a quarter-century after the end of the Soviet Union, a majority of Russians (60%) think that there are parts of other neighboring countries that rightly belong to them. These attitudes have not shifted significantly since 2002, including in the period since the 2014 Russian annexation of parts of Ukraine.

When it comes to neighboring countries, Russians narrowly favor intervening when there are threats to ethnic Russians. About half (52%) support intervention, while 41% oppose it.

Leaving aside threats to ethnic Russians in the “near abroad,” the public is reticent about foreign entanglements. Only a quarter agree that Russia should help other countries sort out their problems, compared with 65% who want Russia to deal with its own problems and let other countries deal with theirs. 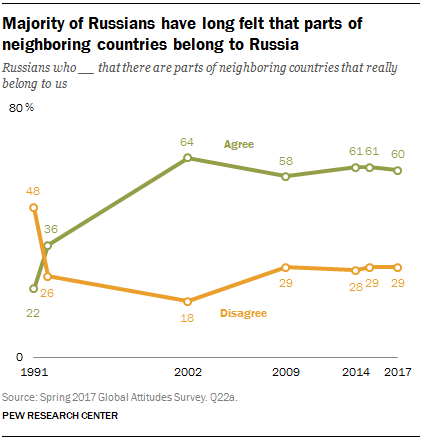 Looking toward the West, fewer Russians today view NATO as a major threat (41%) than in 2015 (50%). Nevertheless, 39% of the public considers the trans-Atlantic alliance to be a minor threat to Russia, and only 16% think NATO is not a threat at all. 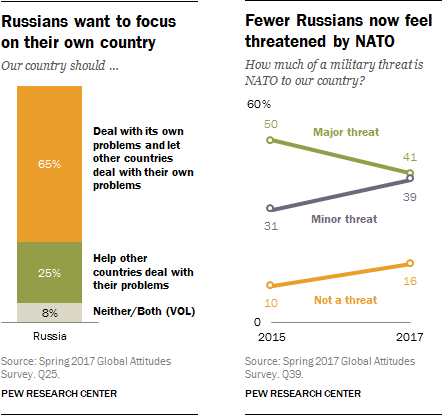 With regard to Syria, a plurality (46%) of Russians want their country’s military involvement to remain unchanged. This compares with roughly a third (34%) who would prefer that Russia curtail its involvement and just 11% who would like to see their military become more engaged in the Syrian conflict.

The Kremlin has publicly asserted that regime change in Syria is out of the question. But among the Russian public, views of Syrian President Bashar al-Assad are lukewarm at best (45% favorable vs. 21% unfavorable), with many claiming not to recognize his name or refusing to provide an opinion about him (34%). 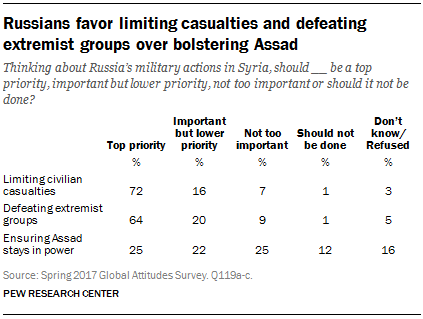 Keeping Assad in power is a relatively low priority for the Russian public: Just a quarter (25%) believe this should be a top priority. In contrast, clear majorities say limiting civilian casualties (72%) and defeating extremist groups (64%) should be top priorities.

Russians Remain Confident in Putin’s Global Leadership 1. President Putin: The Russian perspective 2. Russians’ take on the economy and problems at home
3. Russia’s role in the world and views on national defense
Acknowledgments Methodology