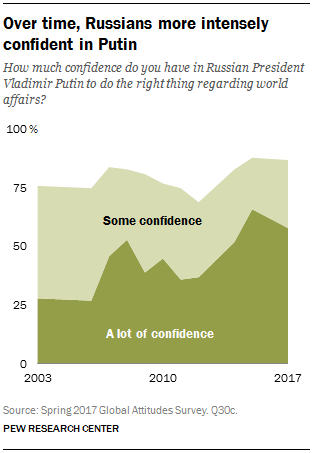 Russians’ high level of confidence in their president’s ability to do the right thing regarding world affairs endures. A full 87% have some or a lot of confidence in Vladimir Putin’s handling of global issues, a share that has held relatively steady since the outbreak of the Ukraine conflict in 2014.

Despite the durability of Putin’s overall rating, his performance in handling specific issues has taken a hit since 2015. Across seven issues, approval of Putin has dropped by anywhere from 12 to 20 percentage points in the past two years. Although his approval on handling relations with China is currently his strongest issue, support for Putin on that measure dropped 12 points since 2015, to 78%. 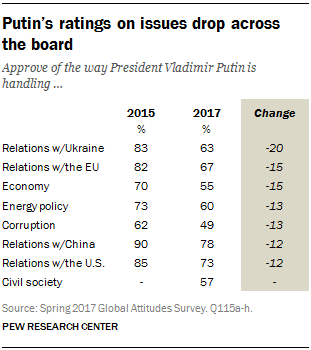 On domestic issues, Putin’s ratings have slipped in the areas of energy policy (from 73% approval in 2015 to 60% today) and the economy (from 70% to 55%). Putin’s marks for reducing corruption have also fallen over the past two years, from 62% to 49%. A 57% majority approves of Putin’s approach to civil society (the question was asked for the first time this year).

Next: 2. Russians’ take on the economy and problems at home
← Prev Page
Page1You are reading page2Page3Page4Page5Page6
Next Page →

Russians Remain Confident in Putin’s Global Leadership
1. President Putin: The Russian perspective
2. Russians’ take on the economy and problems at home 3. Russia’s role in the world and views on national defense Acknowledgments Methodology