To explore the relationship between demographics and internet usage, we estimated a weighted, mixed-effects logit model with random intercepts by country and robust standard errors using the Stata program gllamm for estimating generalized linear latent and mixed models. Alongside this pooled model, we evaluated the robustness of the results by estimating the models for each country separately. These country-specific models yielded similar conclusions. 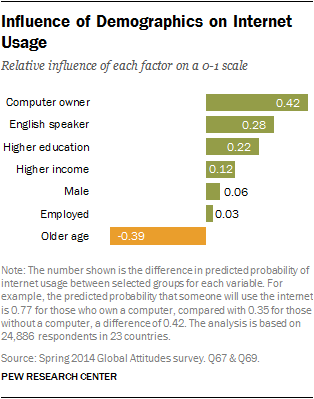 Overall, we find that computer ownership has a strong positive influence on individual internet use. A person with a working computer in their household has a predicted probability of using the internet of 0.77 on a scale from 0 to 1, or 77%. A person without a computer has a predicted internet use of 0.35 (35%) – a difference of 0.42, or 42 percentage points. In addition to computer ownership, English language ability (+0.28), having a secondary education or higher (+0.22), having a higher income (+0.12), being a man (+0.06) and employed (+0.03) all have a statistically significant, positive impact on internet use.

Age also has a significant influence on internet use, controlling for other demographics. Older people have a lower level of internet use than their younger counterparts. For example, the probability that a 26-year-old will use the internet is 0.59 or 59%, compared with a 50-year-old who has a predicted probability of internet use of .20 (20%) for a difference of 39 percentage points (-0.39).

The demographic analysis of internet use comprises a sub-sample (countries=23, n=24,886) of the 32 nations asked the questions, excluding countries in which 20% or more of the sample answered “Don’t know” or “Refused” when asked their household income.2

The independent or predictor variables for education, gender, employment, computer ownership, English language ability and income were recoded as dummy variables, where 1 means secondary education or higher, female, employed, owns a computer, English language capable and income at or above the approximate country median. English language ability includes respondents who state that they can either speak or read some English and those who took the survey in English. Age is treated as a continuous variable, ranging from 18 to 97. All independent variables are significant at the p < .05 level.

The graphic above shows the difference in predicted values for the following groups:

Next: Appendix B
← Prev Page
Page1Page2Page3Page4You are reading page5Page6Page7
Next Page →