Internet access differs substantially across the 32 emerging and developing countries polled, with the lowest rates of internet use in South Asian and sub-Saharan African nations. Within countries, computer owners, young people, the well-educated, the wealthy and those with English language ability are much more likely to access the internet than their counterparts. To access the internet, people increasingly use smartphones rather than more cumbersome fixed landline connections and computers. Around the world, both smartphones and basic-feature phones alike are used for sending messages and taking pictures.

Across these 32 nations, the percentage of people who use the internet varies widely. Overall, a median of 44% access the internet, including half or more in 13 countries. Internet use is highest in the wealthiest of the emerging nations, particularly in Chile and Russia, where more than seven-in-ten have internet access. Though these rates are relatively high, they lag behind the U.S., where 87% have online access. The lowest internet rates are in some of the poorest countries surveyed. Just 8% of Pakistanis and 11% of Bangladeshis either say they access the internet at least occasionally or own a smartphone. Two-in-ten or fewer have access in Uganda (15%), Tanzania (19%) and India (20%).

Within countries, internet access differs substantially by a number of key demographics, including age and education. Younger people ages 18 to 34 are more likely to report accessing the internet than their older counterparts in every country polled, including differences of more than 15 percentage points in all but three countries available for analysis. Especially large differences occur in Asia, with age differences of 40 points or more in five countries. For example, in Thailand 83% of young people are online, compared with just 27% of older Thais. 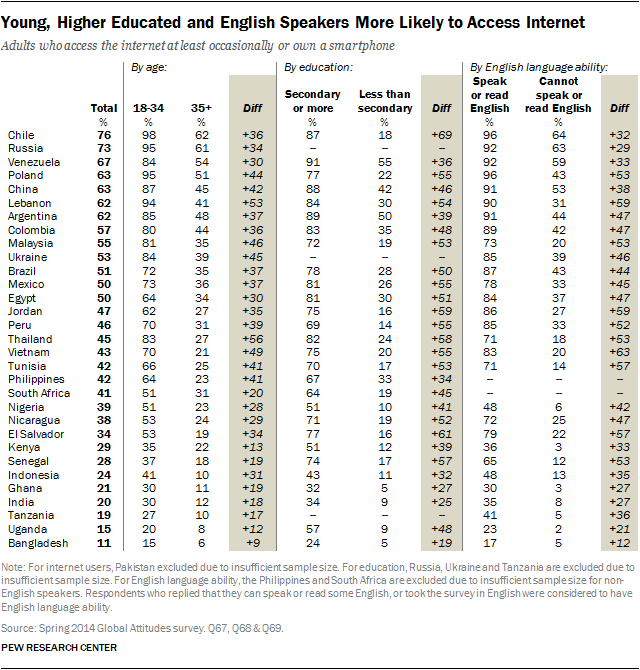 Education is also associated with internet use rates. In all nations surveyed with a sufficient sample size to analyze, those with a secondary education or higher were more likely to access the internet than those with less than a secondary degree. These divisions are especially prominent in Latin America. In six of the nine Latin American countries surveyed, the well-educated access the internet at rates of 50 percentage points or more than less-educated people. This difference is particularly stark in Chile, where 87% of well-educated people use the internet, compared with 18% of those with less than a secondary degree.

In addition to age and education, internet use is more common among people who have some English language ability. In every nation surveyed with a sufficient sample size to analyze, those who can speak or read some English, or completed the survey in English, accessed the internet at much higher rates than those who have no facility with English.

To further explore the relationship between demographics, English language ability and internet usage, we used a statistical technique called multivariate regression, which allowed us to test the individual impact of a number of factors on internet usage while holding other variables constant (see Appendix A for details). Overall, we find that computer ownership, age, English language ability and education have the biggest impact on whether or not someone uses the internet.

Those who own computers, those who can speak or read some English, and those with a secondary education or higher are considerably more likely to use the internet. In addition to these factors, having a higher income, being male and being employed have a significant, positive impact on internet use, though to a lesser degree.

Age also has a significant influence on internet use, controlling for other demographics. In emerging and developing markets, older people are significantly less likely than their younger counterparts to engage in online activity.

Around the world, people often log on to the internet using home computers and internet-capable smartphones. Overall, a median of 38% across the 32 nations surveyed say they have a working computer in their household. In 11 countries, half or more own computers, including 78% in Russia – comparable to the 80% of Americans who say they have a computer in their household. Computer ownership is relatively high in a number of Latin American nations. Majorities in Chile (72%), Venezuela (61%), Argentina (58%) and Brazil (55%) have computers in their homes. Computer ownership rates are lowest in sub-Saharan African nations. Roughly a quarter or fewer have computers at home in every one of these countries, with the fewest in Uganda, where just 3% say they have a computer.

A small but growing number of people use internet-capable smartphones – a median of 24% in emerging and developing countries own this type of device. Only in two of the countries polled do more than half have a smartphone – 58% in Chile and 55% in China, on par with the 58% of Americans who report owning this kind of device. A third or more of people in 10 countries say they own a smartphone, including 48% in Lebanon and 47% in Malaysia. About 10% or fewer Tanzanians, Bangladeshis, Ugandans and Pakistanis own smartphones.

In every country surveyed, there is a significant age difference on smartphone ownership. Young people (those under 35) are significantly more likely than their older counterparts to own an iPhone, BlackBerry, Android or other internet-capable mobile phone.

Large age gaps occur in a number of Asian countries in particular. For instance, in Malaysia, 72% of 18- to 34-year-olds own a smartphone, while only 27% of those 35 and older own one. Differences of 30 percentage points or more also exist in China, Thailand and Vietnam.

Smartphone ownership is also higher among the more educated. In all of the nations polled, those with a secondary degree or higher are more likely to own a smartphone than the less educated. This is especially true in Jordan, where 67% of the well-educated own a smartphone, compared with just 13% of those with less education – a difference of 54 percentage points. A similar gap exists in Chile.

Many Own Cell Phones, Few Have Landlines

While cell phone ownership has increased drastically over the past decade, particularly in Africa, landline connections have remained relatively low – likely due to the lack of infrastructure required for reliable connections. Across the 32 countries surveyed, a median of just 19% say they have a working landline connection in their home, including as few as 1% in Ghana, Nigeria, Uganda and Bangladesh. Instead of waiting for landline access, many in emerging and developing nations have bypassed fixed phone lines in favor of mobile technology.

Landline use is highest in Lebanon, where 79% report having a fixed telephone connection, considerably more than the 60% of Americans who do. (The share of wireless-only households in the U.S. has been growing rapidly over the past decade as landline ownership falls). About half or more in Venezuela (59%) and Argentina (51%) also have landline telephones.

Texting Most Popular Use of Cell Phones 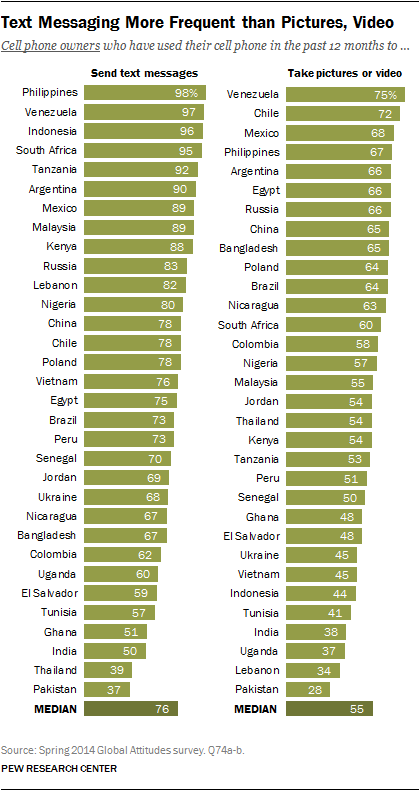 Whether they are using basic feature cell phones or internet-capable smartphones, most cell phone owners use their mobile devices for more than simple phone calls. A median of 76% in emerging and developing markets say they have used their cell phones to send text messages in the past 12 months. In a number of countries, texting is nearly universal. In the Philippines, Venezuela, Indonesia and South Africa, 95% or more of cell phone owners say they text regularly. By comparison, 81% of American cell phone owners report ever sending a text message, according to a 2013 Pew Research poll. Half or more in all but two countries – Thailand and Pakistan –regularly send texts.

While fewer people report taking pictures or video with their mobile phones, a median of 55% do so. Taking pictures and video is most popular in several Latin American countries – about two-thirds or more of Venezuelans (75%), Chileans (72%), Mexicans (68%) and Argentines (66%) regularly snap photos with their phones.

Though texting and taking photos or video on their mobile phones are relatively frequent for all people, young people are much more likely to do so. Young people, those ages 18 to 34, text more regularly than those 35 and older in 30 countries. In particular, young Nicaraguans text considerably more than their older counterparts – 89% of cell phone owners ages 18 to 34 text, compared with fewer than half of older people (45%). Significant age gaps also exist in taking photos and video on mobile phones in 31 countries. In Tunisia, where video of local protests helped ignite the Jasmine Revolution, 60% of young people take pictures or video on their phones, compared with just 25% of those age 35 and older. Age differences of 35 percentage points or more occur in more than a third of the countries surveyed.

Next: 2. Online Activities in Emerging and Developing Nations
← Prev Page
Page1You are reading page2Page3Page4Page5Page6Page7
Next Page →