In Tunisia, the euphoric Arab Spring has descended into a summer of discontent. Two years after launching the Arab Spring, setting in motion changes that have convulsed the Middle East and North Africa, worsening national conditions have soured Tunisians’ views of both their political leadership and many national institutions associated with the country’s democratic awakening. Faith in democracy’s efficacy in solving Tunisia’s problems has also weakened. And Tunisians continue to support a role for Islam in the nation’s politics. 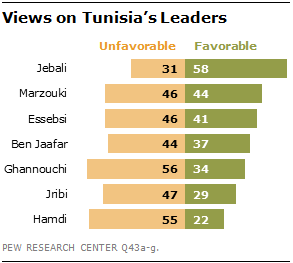 Tunisians are particularly critical of their country’s current political leadership. Less than half (44%) view interim president Moncef Marzouki favorably. Just over a third (37%) see President of the Constituent Assembly and Ettakatol party leader, Mustapha Ben Jaafar, in a positive light, and his support is down 21 percentage points since 2012.

There is even less backing for other coalition and opposition figures, and their standing in the public eye has generally deteriorated. Only former Prime Minister Hamadi Jebali manages to garner the support of a majority of Tunisians (58%) and even his approval has declined slightly from last year.

Political parties have suffered the same fate. The popularity of the ruling moderate Islamist party Ennahda has declined 25 percentage points over the past year, and now just four-in-ten Tunisians see it favorably. Ratings for Ennahda’s coalition partners, Ettakatol and the Congress Party for the Republic, have suffered declines, with roughly three-in-ten now supporting them. The public is also displeased with the opposition: the Popular Petition Party (Aridha Chaabia) and the Republican Party, the largest non-governmental party in the Constituent Assembly. 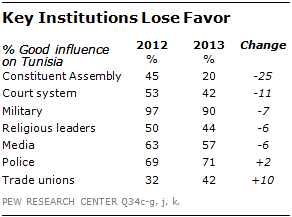 In addition to more negative views of political leaders and parties, the Tunisian public has lost faith in many of the main institutions of Tunisian society. Support for the Constituent Assembly, which is tasked with drafting a national constitution, is down 25 percentage points since last year and just one-in-five Tunisians now say it has a good influence on the country. Positive views of the court system have declined by 11 points. And, less than half the public has faith in religious leaders. However, the military retains widespread public support, and a majority of Tunisians continue to give high marks to the police and the media as well. 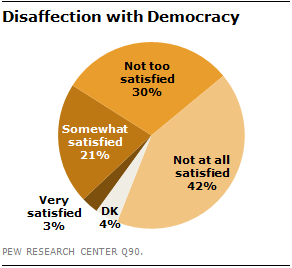 Despite such disappointment, broad majorities continue to value key democratic principles, such as fair elections, free speech and an uncensored media. But it is democracy with an Islamic flavor. Tunisians believe that the principles of Islam should influence their legal system and that religious leaders should have a role in political matters.

These are among the key findings from a nationwide survey of Tunisia by the Pew Research Center. Face-to-face interviews were conducted with 1,000 adults in Tunisia from March 4 to March 19, 2013. 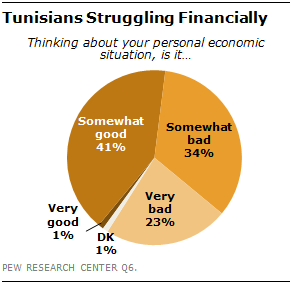 Much Tunisian political disaffection grows out of concern for the state of their nation. There is a growing number of people who think things are worse today than before the Arab Spring.

Large majorities of Tunisians say their economy is doing poorly (88%) and that they are dissatisfied with the direction of the country (81%). Optimism that the economy will improve in the coming year has declined from 75% in 2012 to just 50% today.

Tunisians’ personal economic situation has also gotten worse over the past 12 months. In 2013, 42% say their personal finances are very or somewhat good, down from 56% last year. 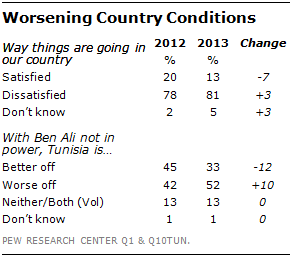 Given this widespread disappointment in the economy, about half of Tunisians (52%) say Tunisia is worse off today than when Zine el-Abidine Ben Ali, the ousted strongman, was in power. Only a third believe the country is better off. This represents a significant shift in attitudes from 2012, when the public was divided – 42% said worse off and 45% said better off.

Disaffected with Democracy but Supportive of Democratic Principles

As conditions have deteriorated, Tunisians’ faith in democracy has weakened over the past year. The percentage who thinks democracy is preferable to any other kind of government has declined from 63% last year to 54% this year. 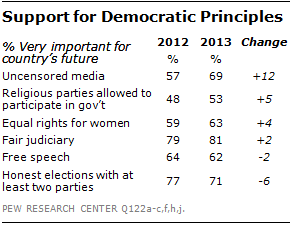 Nonetheless, broad majorities still prioritize key democratic principles and institutions. At least six-in-ten say that a fair judiciary, competitive elections, an uncensored media, equal rights for women, and free speech are very important for the country’s future. More than half also think it is high priority for religious parties to be able to participate in politics. Overall, there has been minimal change in the past year in the value Tunisians place on these democratic principles.

However fewer Tunisians today say a democratic government is better able to solve their country’s problems than a leader with a strong hand (53% preferred a democratic form of government in 2013 vs. 61% in 2012).

Increasingly, Tunisians prioritize the economy and political stability over democracy. In 2012, 59% of the public said it was more important to have a strong economy than to have a good democracy (40%). Today, the balance of opinion is even more strongly in favor of improving the economy: 65% put a priority on the economy, while just 30% say democracy. 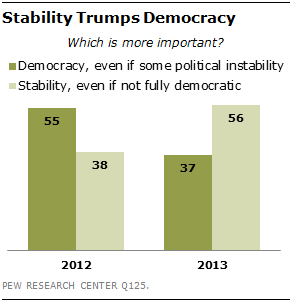 Similarly, the public’s demand for political stability rose dramatically in the past twelve months. Last year, a majority (55%) said it was more important to have a democratic government, even if there was some political instability. Roughly four-in-ten (38%) thought it was more important to have stability. In 2013, attitudes have flipped – just 37% now choose democracy and 56% say stability is a higher priority, even if the government is not fully democratic.

Desire for Islam in Politics 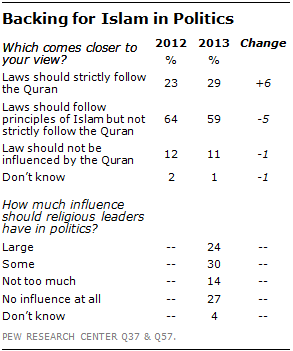 Next: Chapter 1. Sour National Conditions
← Prev Page
You are reading page1Page2Page3Page4Page5Page6
Next Page →