The Tunisian public gives overall low marks to the country’s leaders. Only former Prime Minister Hamadi Jebali manages to garner the support of a majority of Tunisians (58%). Still, Jebali’s popularity is down eight points from last year, when roughly two-thirds (66%) of Tunisians held a favorable opinion of the leader. Supporters of the moderate Islamist party Ennahda are significantly more likely (84%) to view Jebali positively than supporters of the secular Nidaa Tounes party (54%).

Interim President of Tunisia, Moncef Marzouki, receives modest support from the Tunisian public. More than four-in-ten Tunisians (44%) view Marzouki favorably in his second year as interim leader. Tunisians who say a democratic form of government is important for the country are more likely to support Marzouki than those who say a strong leader is important (49% to 40%, respectively). 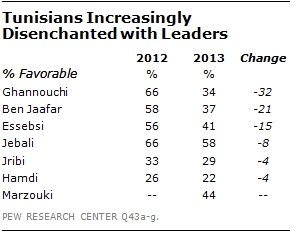 Beji Caid Essebsi, former interim Prime Minister of Tunisia, is viewed favorably by roughly four-in-ten Tunisians (41%), while last year he was popular with over half of all Tunisians (56%). President of the Constituent Assembly and leader of the social democratic Ettakatol Party, Mustapha Ben Jaafar, is also considerably less popular. Over a third of Tunisians (37%) view Ben Jaafar favorably, compared to last year when a majority of Tunisians (58%) favored him (a 21 percentage point drop).

The Tunisian public shows low levels of support for Ennahda party leader Rached Ghannouchi. Only 34% say they have a favorable view of Ghannouchi, down a full 32 percentage points from last year when nearly two-thirds (66%) of all Tunisians viewed him favorably. Supporters of the Ennahda party are much more likely (74%) to view Ghannouchi favorably than supporters of the secular Nidaa Tounes party (7%). Those Tunisians who say a democratic form of government is important for the country are more likely to support Ghannouchi than those who say a strong leader is important (39% to 30%, respectively).

Maya Jribi, leader of the centrist Republican Party, also ranks low with the public, with just 29% of Tunisians viewing her favorably. Only 22% view Hachmi Hamdi, a journalist and leader of Aridha Chaabia (known as the Popular Petition Party), in a favorable light. 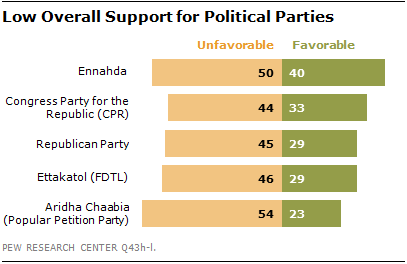 Tunisia’s political parties also receive low marks, with more people generally viewing the parties unfavorably than favorably. The leading moderate Islamist party, Ennahda, is the most popular, but only four-in-ten Tunisians view it favorably. Ennahda’s support has dropped significantly since last year, however, when nearly two-thirds of all Tunisians (65%) viewed the party in a positive light, a decline of 25 percentage points. Religious Tunisians are more likely to support Ennahda: those who pray five times a day (45%) and who believe laws should strictly follow the Quran (53%) are more supportive of the party than those who pray less (29%) and believe laws should be decided separately from Quranic teachings (34%). 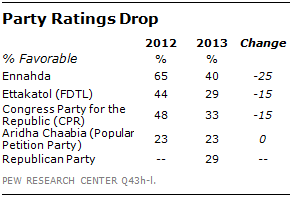 There is low support for Aridha Chaabia (Popular Petition Party), with just over two-in-ten Tunisians (23%) viewing the party favorably. The Republican Party, a centrist party formed only last year, garners support from only about three-in-ten Tunisians (29%).

Tunisians Not Positive about Nation’s Institutions 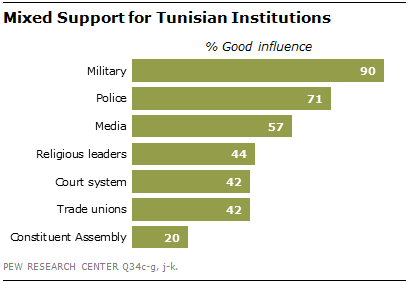 Trade unions have made gains with the public since last year, with around four-in-ten Tunisians (42%) now saying they are good for the country, up from 32% in 2012.

Tunisia’s National Constituent Assembly receives very little support from the public this year. With Assembly debate on the constitution at a standstill, only 20% of Tunisians say that the body is a good influence on the country, while about seven-in-ten believe that it is a bad influence. This is a 25 point drop in popularity from last year when 45% of Tunisians supported the Assembly.

About four-in-ten U.S. adults believe humanity is ‘living in the end times’