Despite broad disappointment with the state of their nation and the ruling Islamist party, Ennahda, most Tunisians continue to welcome a role for Islam in politics. A majority (59%) thinks their laws should follow the values and principles of Islam. Another 29% say laws should strictly follow the Quran, while just 11% say Islam should have no influence on their country’s politics. Opinion today is very similar to what it was in 2012, although the percentage of Tunisians who want their laws to strictly follow the Quran has gone up slightly from 23% to 29%. 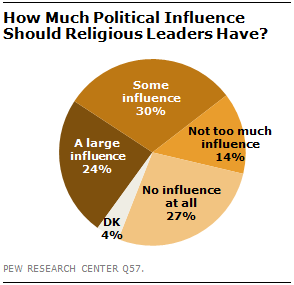