Most Russians continue to express discontent about the way democracy is working in their country. And there is a continued clear lack of confidence in the capacity of democracy to solve the country’s problems – nearly six-in-ten say a strong leader is better suited for dealing with the nation’s challenges than a democratic government. 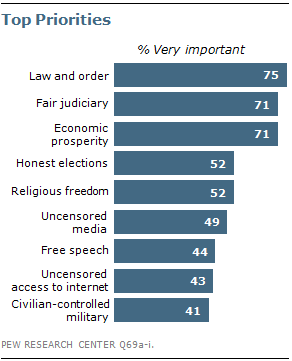 Moreover, economics tends to trump democracy as a top priority for most Russians. When asked to choose between a good democracy and a strong economy, three-in-four pick the latter. Economic prosperity – along with law and order – is considered a more important priority than nearly all of the democratic rights and institutions tested on the survey.

Still, Russians value many features of democracy, such as a fair judicial system, competitive elections, an uncensored media, and free expression. Indeed, today they place a higher premium on these democratic freedoms than was the case three years ago.

Few Russians, however, believe their country has the institutions and liberties they desire. As previous Pew Global Attitudes surveys have highlighted, there is a significant “democracy gap” in Russia between citizens’ democratic aspirations and the reality of their current political system.

Most Dissatisfied With Democracy 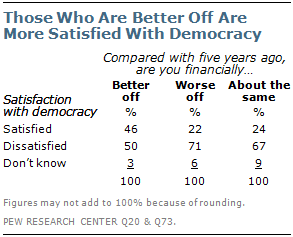 Roughly six-in-ten Russians (63%) are dissatisfied with the way democracy is working in their country, unchanged from one year ago. About three-in-ten (31%) say they are satisfied and 6% offer no opinion.

Views on this question are linked to whether Russians believe they made financial progress over the last five years. Nearly half (46%) of those who say they are better off financially today than they were five years ago are satisfied with the way democracy is working, compared with just 22% of those who are worse off and 24% of Russians who say their financial situation is about the same as it was five years ago.

Amid widespread disillusionment about how democracy is working, 57% say “a leader with a strong hand” is better equipped to solve the country’s problems than a democratic form of government. Just 32% think a democratic government is better suited for dealing with these challenges. 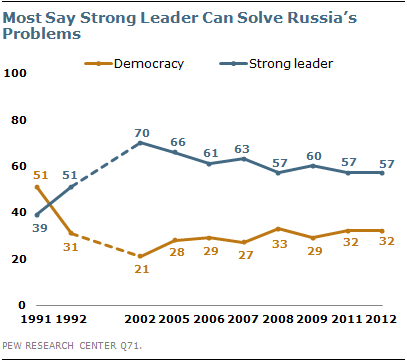 This is unchanged from 2011, though the percentage expressing confidence in a strong leader is down significantly from a decade ago, when 70% held this view.

Russians have not always expressed so little faith in democracy. Two decades ago, as the Soviet Union was dissolving, a spring 1991 survey by the Times Mirror Center (the predecessor of the Pew Research Center) found 51% of Russians preferring a democratic form of government and 39% favoring a strong hand. But by the fall of 1992, that had flipped to 51% favoring a strong leader and 31% preferring democratic government. 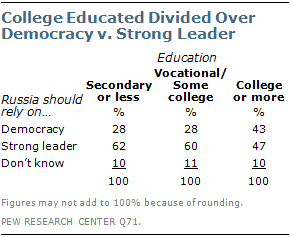 Education is strongly correlated with views on this issue. Among Russians with a college education, opinions are closely divided: 43% favor a democratic government, while 47% endorse a strong leader. Among those with less education, only 28% choose democracy and roughly six-in-ten say the country should rely on a strong leader. 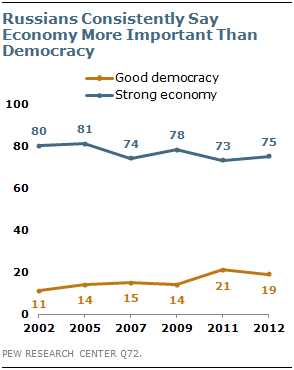 In fact, views on this question have been fairly stable over the past decade, although the percentage who prioritize democracy has crept up slightly from the 11% registered in 2002.

Support for Democratic Values, But Law and Order, Prosperity, Too

Law and order tops the list of national concerns among Russians: 75% say it is very important to live in a country that maintains law and order. Roughly seven-in-ten (71%) also say economic prosperity is a top priority. 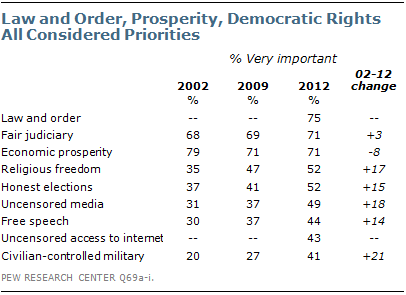 At the same time, Russians rate key principles of democracy as high priorities. In particular, 71% say it is very important to have a judicial system that treats everyone the same way. Roughly four-in-ten or more rate the other rights and institutions tested as very important, and broad majorities say they are at least somewhat important.

Moreover, the percentage rating religious freedom, honest elections, free media, being able to openly criticize the government, and a civilian-controlled military as very important has increased notably since 2009, and by double digits over the last decade.

Among demographic groups, low-income Russians tend to place less importance on free speech, honest elections and civilian control of the military than do those with middle and higher incomes. High-income Russians are especially likely to say a fair judiciary (82%) and uncensored media (60%) are very important. 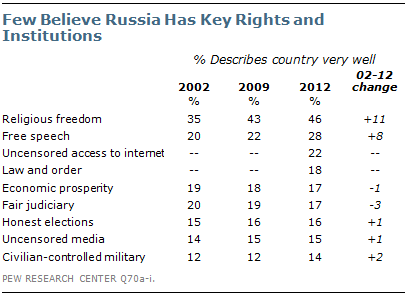 While Russians tend to value key elements of democracy, relatively few think their country currently has these features. Only 28% say having freedom of speech describes Russia very well, and roughly one-in-five or fewer say this about uncensored internet access, a fair judicial system, competitive elections, free media, and civilian control of the military. The exception is religious freedom – nearly half says this describes Russia very well. And unlike most of the other aspects of democracy included on the survey, more Russians now believe their country has religious freedom than was the case a decade ago.

An analysis of the six priorities that concern fundamental aspects of democracy – a fair judiciary, honest elections, religious freedom, free press, free speech, and civilian control of the military – reveals a large chasm between what Russians want from democracy and the degree of democracy they think Russia has attained. 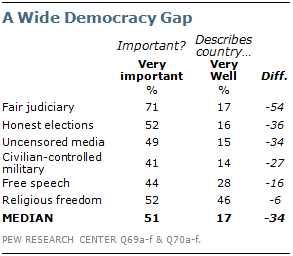 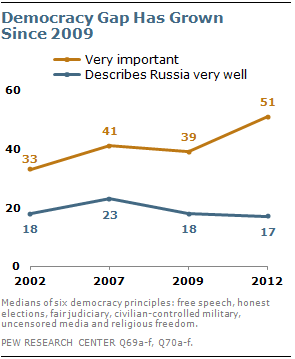 The gap is 36 points on honest elections, 34 points on uncensored media and 27 points on a civilian-controlled military. This gap is somewhat narrower – 16 points – on freedom of speech. Religious freedom is the one area where evaluations are nearly as positive as expectations, with 52 percent saying it is very important and 46 percent saying it describes Russia very well.

Looking at the median percentage each year who say these rights and institutions are very important and comparing it with the median percentage who believe these rights and institutions describe Russia very well, it is possible to discern a democracy gap that has widened over time as Russians consistently report the absence of democracy on the ground, even as more place a value on political freedom.

Next: Chapter 4. Views of Leaders
← Prev Page
Page1Page2Page3You are reading page4Page5Page6Page7Page8
Next Page →