Following a winter of discontent Russians express an increased appetite for political freedom, and at the same time strongly endorse Vladimir Putin.

Compared with just a few years ago, more Russians believe that voting gives people like themselves an opportunity to express their opinion about the country’s governance, more feel that it is important to be able to openly criticize the government, and greater numbers see freedom of the press and honest elections as very important.

Consistent with the value placed on core democratic principles, a solid majority (64%) see attending protests as an opportunity to speak out about how the government is run, and more than half (56%) specifically approve of the mass demonstrations that followed the December 2011 parliamentary vote, which was marred by fraud allegations. In that regard, while a modest 56%-majority says they are satisfied with the outcome of the March 4, 2012 presidential election, just 47% believe that election was fair.

Nonetheless, the poll finds a number of indicators of support for the status quo. Most notably, 72% of Russians voice a favorable opinion of Vladimir Putin, while almost as many hold a positive opinion of Dmitri Medvedev (67%). Putin’s popularity is being fueled more by views of the economy and perceptions of social mobility than it is being hurt by democratic aspirations. Relatively few Russians express favorable views of other prominent political figures. Roughly four-in-ten or fewer have positive opinions of presidential contenders Gennady Zyuganov (39%), Mikhail Prokhorov (36%), Sergei Mironov (36%) and Vladimir Zhirinovsky (28%). Meanwhile, 54% of Russians are unfamiliar with government critic and protest organizer Alexei Navalny. 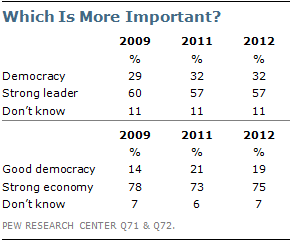 Further, as they have for most of the post-Soviet era, a majority of Russians continue to feel that relying on a leader with a strong hand in order to solve problems is more important than relying on a democratic form of government (57% vs. 32%). In addition, strong majorities say it is very important to live in a country where there is law and order (75%) and economic prosperity (71%). In fact, three-quarters say they would choose a strong economy over a good democracy.

These are among the principal findings from a nationwide survey of Russia by the Pew Research Center’s Global Attitudes Project. Face-to-face interviews were conducted with 1,000 adults in Russia between March 19 and April 4, 2012. The poll finds that Russians are generally divided about their country’s direction as Putin begins his third term as president: 46% are satisfied with the way things are going in their country, while 45% are not. At home, the economy is a concern for many Russians, with only 32% describing the current economic situation as good. Meanwhile, in the international arena, a solid majority (73%) believe Russia deserves greater respect from other countries. The survey also finds persistent strains of ethnic nationalism among Russians, with about half (53%) saying Russia should be for Russians only, and 44% saying it is natural for Russia to have an empire.

Against the backdrop of protests over the conduct of elections and the state of democracy in Russia, increasing numbers of Russians endorse the importance of key civic freedoms and institutions. Looking back a full ten years, five of the six measures of democratic freedom tested by the Global Attitudes Project have witnessed double-digit increases in terms of the percentage of Russians describing them as “very important.” 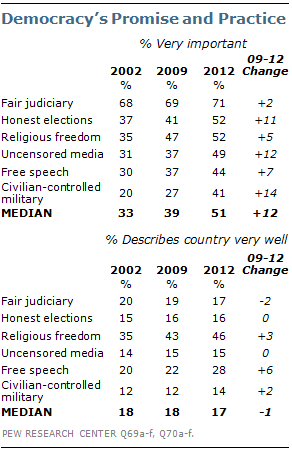 As they have in the past, today Russians place the greatest value on a judiciary that treats all citizens equally (71%), but compared with 2009, more now also value a civilian-controlled military (up 14 percentage points), an uncensored media (up 12 points) and honest elections (up 11 points). The importance of free speech and religious freedom has grown more modestly over the past three years (up 7 and 5 percentage points, respectively).

Although growing numbers of Russians value civic freedoms and institutions, relatively few see these as a reality in their country. Roughly one-in-five or fewer say a fair judiciary (17%), honest elections (16%), uncensored media (15%) and a civilian-controlled military (14%) describe Russia very well. Slightly more (28%) say that freedom of speech is characteristic of their country, while almost half (46%) agree that citizens are generally free to practice their religion.

Comparing the percentage of Russians who place a high value on core political freedoms with the percentage who believe the same freedoms are a fact of life in Russia, it is possible to discern a growing gap between democracy’s promise and practice.

In light of this gap, it is not surprising to find only 31% of Russians are satisfied with the way democracy is working in their country. This sentiment is pervasive across demographic groups. And although those with a favorable view of Putin are somewhat more upbeat about the state of democracy in Russia (36% satisfied), even within this group a majority (57%) see room for improvement. 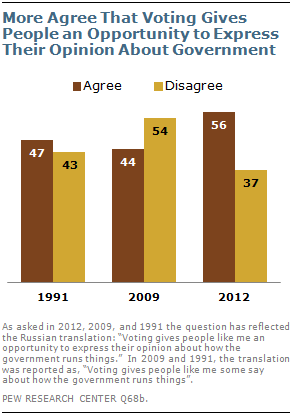 Despite the public’s disappointment with democratization in Russia, the number of people who say voting matters has actually risen. In 1991, when the Times Mirror Center, precursor to the Pew Research Center, first asked if voting gave people an opportunity to express their opinion about how government runs things, just 47% agreed. In 2009, the balance of opinion showed more doubting the power of voting. But this spring there seems to be a renewed conviction that casting one’s vote matters – a 56%-majority now believes this to be true.

Positive shifts in the value placed on voting are evident across education and income groups. Meanwhile, attitudes among older Russians appear to have “caught up” with those of younger Russians. In 2009, just over half (54%) of those ages 18-29 said that voting gave them a say about governance, but fewer among 30-49 year olds (42%) or those over 50 (38%) felt the same. Today, about the same number of 18-29 year olds think voting matters (51%), but more among the 30-49 and 50-plus cohorts now share this view, (55% and 61%, respectively).

Along with generally endorsing the importance of voting, a strong majority of Russians (64%) believe that attending protests or demonstrations is an effective way for average citizens to comment on the government’s actions. And more than half (56%) say they support the protests for fair elections that arose in the wake of the controversial parliamentary vote in December of last year.

While some in Russia have suggested that the protests for fair elections are the result of Western meddling, most Russians (58%) disagree, attributing the demonstrations instead to genuine dissatisfaction among the public. 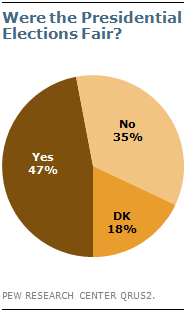 Protests in the wake of the December 2011 parliamentary elections brought to the fore questions about the fairness of the March 4, 2012 presidential vote. Following Putin’s first-round victory, the public offers a mixed assessment of the balloting: 47% believe the election was free from manipulation, while roughly a third (35%) disagree and 18% are uncertain.

Overall, a majority (56%) say they are satisfied with the results of the election, compared with a third (33%) who are dissatisfied. One-in-ten do not have an opinion either way.

The perceived fairness of the March 4th vote is a key factor influencing satisfaction with the outcome. 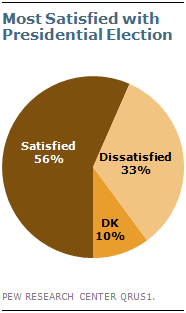 Nearly nine-in-ten (87%) who think the election was “clean” say they are satisfied with the outcome. By contrast, only one-in-five who believe the vote was unfair say the same. Russians who are unsure whether the election was fair, meanwhile, tend to be satisfied (46%) with Putin’s victory.

Not surprisingly, reaction to the election results is especially positive among Russians who hold a favorable opinion of Putin (71% satisfied) and those who feel they are better off financially than they were five years ago (71% satisfied).

While some Russians may have their doubts about the fairness of the March 4th presidential vote, Putin clearly remains popular. Roughly seven-in-ten (72%) say they have a favorable opinion of the returning president. Only about a quarter (24%) of respondents voice the opposite view.

Putin’s base of support is broad, although he is especially popular among women, Russians ages 30-49 and those with less than a college education. Overall, opinion of the newly elected president is more influenced by views of the economy and perceived social mobility. People who say the economy is good and feel they are better off than their parents are more likely to have a positive view of Putin. To the degree that democratic leanings help shape attitudes toward Putin, those who say an uncensored media is very important are less likely to have a favorable opinion of Russia’s long-time leader.

Dmitri Medvedev, who will now be stepping into the role of prime minister, is also widely popular. Two-thirds of Russians have a favorable view of Medvedev, while only 28% voice an unfavorable opinion. 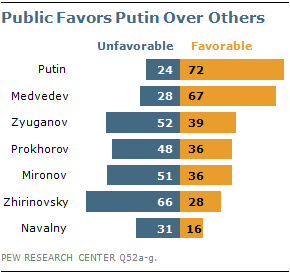 In terms of public support, Putin and Medvedev clearly stand out from other figures on Russia’s political stage. Among the presidential candidates this spring, for example, Putin is the only one viewed favorably by a majority of Russians. Indeed, on balance, opinions of veteran politicians such as Communist Party head Zyuganov, A Just Russia’s Mironov and Liberal Democratic Party leader Zhirinovsky are negative (52%, 51% and 66% unfavorable, respectively).

Views are similarly negative for presidential candidate Prokhorov: roughly half (48%) have an unfavorable view of the billionaire businessman. Meanwhile, among the relatively few Russians familiar with Alexei Navalny, the online activist and a prominent organizer of anti-government protests, views also tend to be more negative than positive (31% vs. 16%).

As Putin assumes the presidency for the third time, he faces a public with mixed views about the state of their nation. At home, opinion is nearly evenly split as to whether the country is headed in the right direction. On one hand, more today (46%) than at any point since 2008 say things are going well. But on the other, worries persist. In particular, a majority (64%) continues to describe the economy as bad. 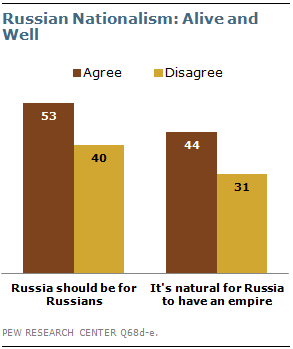 Internationally, meanwhile, Russians show signs of insecurity. Slightly more than half (55%) believe their country is generally disliked by other countries – an increase of 8 percentage points since 2010. And fully 73% say Russia deserves to be more respected around the world than it currently is.

The desire for enhanced prestige on the world stage coexists with a persistent strain of ethnic nationalism. Roughly half (53%) of Russians say their homeland should be for Russians, while 44% think it is natural for Russia to have an empire.

Next: Chapter 1. National Conditions
← Prev Page
You are reading page1Page2Page3Page4Page5Page6Page7Page8
Next Page →