Russians are divided about the direction of their country. Slightly less than half are satisfied with the way things are going, while about the same number are dissatisfied.

Russians also offer a mixed assessment of their own economic progress. Roughly as many say they are better off compared with five years ago, as say they are worse off. Views on the current economy are much clearer though, with a majority describing it as bad, and relatively few expecting to see improvements over the next 12 months. 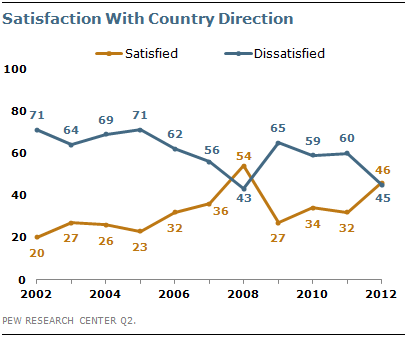 Russians are nearly evenly split on the question of their country’s direction: 46% say they are satisfied with the way things are going in their country, while 45% say they are dissatisfied. Another 9% do not have a definite opinion.

Although divided, the mood of the Russian public is much improved from a year ago, when only 32% were satisfied with the country’s direction, compared with six-in-ten who were not. In fact, satisfaction with Russia’s direction is at its highest level since 2008.

Politics seem to be a factor in whether people feel the country is headed in a positive direction. For instance, among Russians who view Putin favorably, 55% say they are satisfied with the way things are going in their country, while only 37% are dissatisfied. In contrast, those who have an unfavorable opinion of Putin are roughly four times as likely to say they are unhappy as happy with the country’s direction (71% dissatisfied vs. 18% satisfied). 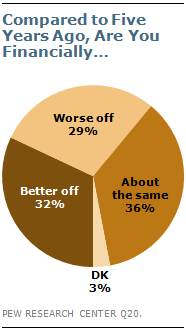 Asked how their financial situation compares with five years ago, about a third of Russians (32%) say they and their families are better off today, while 36% say their situation has not changed. Roughly three-in-ten (29%), meanwhile, report being worse off than they were five years ago.

Notably, Russians who say they and their families are better off tend to be the more upbeat about the country’s direction. Roughly six-in-ten (63%) in this group are satisfied with the way things are going in Russia, whereas only 42% of those who say their situation is unchanged share this view. Among those who report being worse off today, even fewer (31%) are satisfied with the country’s direction. 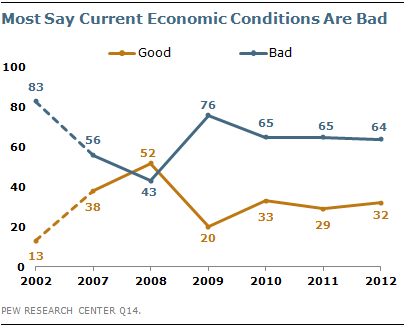 Negative views of the economy are especially common among those who are financially worse off compared with five years ago (72% bad) and those who say their financial situation is about the same as five years ago (70%). Meanwhile, Russians who feel they are better off today are divided on the economy: 48% good vs. 47% bad. 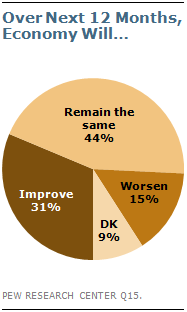 Overall, just 31% of Russians believe the economic situation will improve over the next 12 months, while 44% think it will remain the same. About one-in-six (15%) predict the economy will worsen in the coming year.

Among Russians who say they are better off than they were five years ago, predictions for the future are a bit brighter. Roughly half (51%) in this group believe the economy will improve over the next year, while roughly a third (35%) expect the situation to remain the same and just 9% foresee worse times ahead.

By contrast, among those who say their circumstances have grown worse, only about a quarter (23%) expect the economy to improve.