On balance, Vladimir Putin’s first-round victory in the March 4th presidential vote appears to sit well with most Russians, with a majority saying they are satisfied with the results of the election.

Views on the fairness of the election, however, are more mixed. Only a plurality believe the presidential election was “clean,” while a substantial minority question the integrity of the balloting, and almost one-in-five are unsure.

Overall, a clear majority of Russians endorse the notion that protests and demonstrations provide people an opportunity to express their opinion about how government runs things. And most – including many Putin-backers – say they support the fair-elections protests that began in the wake of the December 2011 parliamentary vote.

Interestingly, compared with a few years ago, more Russians today see their vote as a way to communicate their opinion about governance, even as many continue to doubt elected officials actually pay heed to what average citizens think.

Views on the Presidential Vote

A modest majority of Russians (56%) say they are satisfied with the results of the March 4th election, while a third say they are not. One-in-ten do not offer an opinion.

Views on the fairness of the election are more mixed. Just 47% believe balloting was free from manipulation, while roughly a third (35%) disagree and 18% are uncertain.

The perceived fairness of the March 4th vote is a key factor influencing satisfaction with the outcome. Nearly nine-in-ten (87%) who think the election was fair say they are satisfied with the outcome. By contrast, only one-in-five who believe the vote was unfair say the same. Russians who are unsure whether the election was fair, meanwhile, tend to be somewhat content with Putin’s victory (46% satisfied vs. 23% dissatisfied).

As one might expect, Russians who hold a favorable opinion of Putin generally express satisfaction with the March 4th election results: 71% in this group are pleased with the former president’s victory, while just 20% are not. The inverse is true among those who have a negative view of Putin – only 17% express satisfaction with the election outcome, compared with 72% who are dissatisfied.

Reaction to the election is also split along party lines. Nearly eight-in-ten Russians (78%) who identify with United Russia, Putin’s governing party, say they are satisfied with the March vote, while only 16% are displeased. By contrast, only 31% among those aligned with the Communist Party are satisfied with the election results, compared with nearly six-in-ten (58%) who are not. Reaction to Putin’s victory is more divided among Russians aligned with other parties (41% satisfied, 50% dissatisfied) or no party (46% satisfied, 37% dissatisfied). 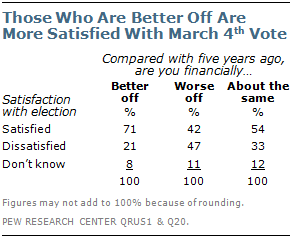 Putin’s return to the presidency is clearly a positive outcome for those who feel they are better off than five years ago. Roughly seven-in-ten (71%) in this group say they are satisfied with the results of the March 4th vote, compared with 21% who are dissatisfied. Among those who say their circumstances are unchanged from five years ago, reaction to the election is mostly positive: 54% satisfied, 33% dissatisfied. Among those who feel worse off today, opinion is divided regarding Putin’s first-round triumph, with 42% expressing satisfaction and 47% saying they are dissatisfied. 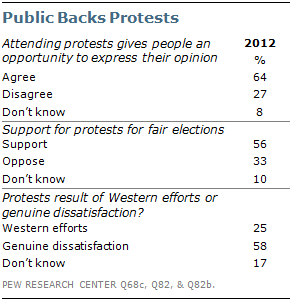 Russians generally endorse the value of popular protests, with 64% saying they mostly or completely agree that attending demonstrations gives people like themselves an opportunity to express their opinion about how the government runs things. Roughly a quarter (27%) disagree, while 8% don’t have a definite opinion.

Asked specifically about the protests that arose in the wake of the December parliamentary vote, a 56%-majority say they support the protests, compared with a third who oppose the demonstrations and one-in-ten who do not offer an opinion.

Only a quarter of the Russian public subscribes to the view that the protests of the last several months are the result of Western powers attempting to destabilize Russia. Rather, nearly six-in-ten (58%) believe the demonstrations emanate from genuine Russian dissatisfaction with the conduct of elections.

Support for the recent protests is somewhat higher among men than women (61% vs. 52%). People with at least a college education are more supportive than those with secondary education or less (63% vs. 49%).

Notably, Russians who have a favorable opinion of Putin are divided over the issue of the fair-election protests (48% support vs. 42% oppose), while those who view Putin unfavorably clearly back the protesters (79% support vs. 12% oppose). Similarly, those who question the integrity of the March 4th presidential vote clearly come out in favor of the demonstrators by a 74% to 17% margin. Meanwhile, those who believe the election was fair tend to object to the protests (41% support vs. 51% oppose). 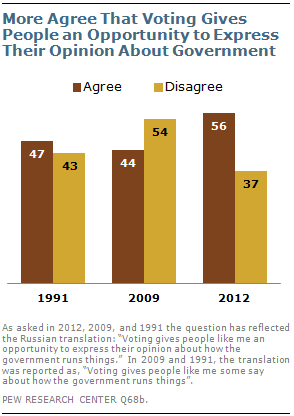 Against the backdrop of protests demanding “clean” elections, a majority of (56%) of Russians say that voting gives people like themselves an opportunity to express their opinion about how government runs things. Just over a third (37%) disagree.

Compared with previous years, belief in the importance of voting has strengthened. In 1991, for example, when Russians were first asked if voting gave people a voice, opinion was divided: 47% said yes, while 43% said no. By 2009, the public had actually soured somewhat toward the ballot box, with 44% saying their vote mattered, but more than half (54%) saying it did not. 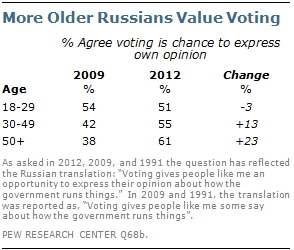 Today, attitudes toward voting are fairly consistent across demographic groups. In terms of change over time, however, one of the most dramatic increases has occurred among Russians age 30 and older. In 2009, just 42% of those 30-49 and 38% of those over 50 felt their vote mattered. Today, 55% and 61%, respectively, feel this is true. Among young people, meanwhile, attitudes toward voting have remained about the same: in 2009, 54% of 18-29 year olds said voting gave them a voice; today, roughly the same number (51%) still hold this view.

Despite the increased importance placed on voting, Russians are not convinced that their voices matter to those in power. Six-in-ten, for instance, doubt that elected officials care what people like themselves think, while just a third believe elected office-holders care about public opinion.

Though a minority, the number of Russians who believe elected officials care about citizens’ views is actually higher than in years past. In 2009, only about a quarter (26%) held this view, while in 1991 just 18% thought this was the case.

Next: Chapter 3. Attitudes Toward Democracy
← Prev Page
Page1Page2You are reading page3Page4Page5Page6Page7Page8
Next Page →