Nationalism remains a potent sentiment among Russians today, and a plurality believe it’s natural for the country to have an empire. At the same time, the prevailing view is that Russia is more disliked than liked around the world, while nearly three-in-four say their country deserves greater respect internationally. 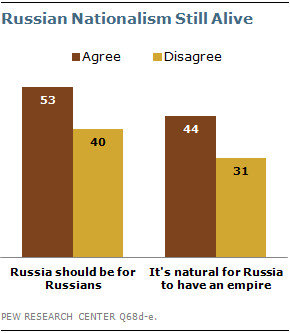 Along with strains of ethnic nationalism, the image of Russia as an imperial power persists among a substantial number of Russians today. A 44%-plurality say it’s natural for their country to have an empire, compared with 31% who disagree and a quarter who do not have a definite opinion. In 2009, roughly the same number (47%) felt it was natural for Russia to have its own empire. Two decades ago, with the Soviet Union on the verge of collapse, only 37% shared this view.

Notably, Russians who admire Vladimir Putin are not especially adamant about their country’s imperial claims. Among those with a favorable opinion of Putin, 45% think it’s natural for their country to have an empire, compared with 43% among those who have a negative opinion of the Russian president. 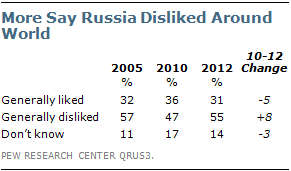 A little more than half of Russians (55%) think people in other countries generally dislike Russia. This is up from 47% in 2010, but comparable to the 57% who expressed the same view in 2005. Today, 31% say Russia generally is liked around the world, while 14% give no opinion. 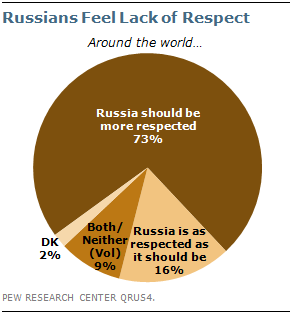 Nearly three-in-four Russians (73%) say their country should be more respected around the world; only 16% believe that internationally Russia is as respected as it should be.

The sense that Russia deserves greater respect from other countries is fairly constant across age, education and income groups.