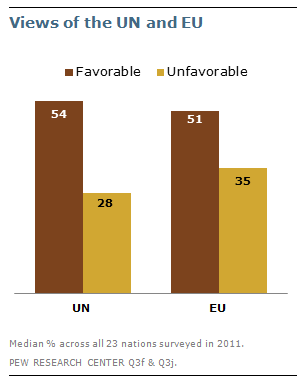 Overall, both the United Nations and European Union receive largely positive ratings, although there are a few countries where these organizations are seen in a negative light. Across the 23 nations surveyed, a median percentage of 54% offer a favorable opinion of the UN; a median of 51% express a positive view of the EU.

However, while ratings for the EU remain generally positive, its image has declined since last year, and it receives especially low ratings in key Arab nations such as Egypt, Jordan, and the Palestinian territories.

And in Turkey – a country whose ambitions to join the EU have met with resistance from some European leaders – just 23% give the organization a favorable rating. However, the EU is not alone in this regard – the other nations and organizations tested also receive some of their lowest ratings in Turkey. Also, Turkey is the only NATO member state surveyed in which a majority has a negative opinion of the military alliance.

Russia gets mixed reviews among its European neighbors, receiving its highest marks in Ukraine and its lowest ratings in Poland. On balance, Americans offer positive assessments of their former Cold War rival.

The most negative ratings for Russia are found in Israel, where roughly seven-in-ten (69%) express an unfavorable opinion. And, with a potential UN Security Council debate over Palestinian statehood looming, Israelis also give the UN its lowest rating – again, about seven-in-ten (69%) express a negative view. However, an almost equal number of Palestinians (67%) also give the UN an unfavorable rating. 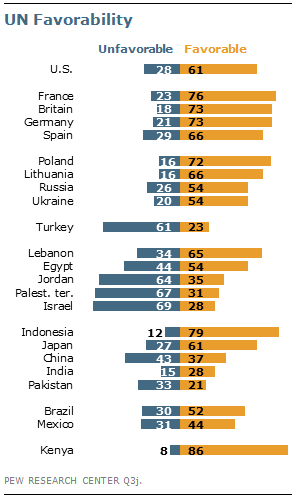 Overall, the UN receives positive ratings in the nations polled – majorities or pluralities in 16 of 23 countries express a positive view of the organization.

It gets particularly high marks among EU member states. At least 66% have a favorable opinion of the UN in France, Britain, Germany, Spain, Poland and Lithuania.

Roughly six-in-ten Americans express a favorable view, although there are significant partisan differences on this issue – 71% of Democrats give the organization a positive rating, compared with 58% of independents and 51% of Republicans.

The UN gets especially positive reviews in Kenya (86%) and Indonesia (79%). The most negative ratings are found in the Middle East. Roughly seven-in-ten Israelis (69%) assign an unfavorable rating, as do 67% of Palestinians and 64% of Jordanians. However, most Lebanese (65%) and Egyptians (54%) express a positive opinion of the organization.

Positive assessments of the UN have become more common in Japan over the last year, jumping from 45% to 61%. This may be tied in part to assistance provided by the UN following the devastating March 11 earthquake and tsunami. Roughly half of those surveyed in Japan (49%) say the UN provided either a great deal or a fair amount of assistance to Japan following the tragedy. (For more on Japanese views regarding international assistance, see “Japanese Resilient, but See Economic Challenges Ahead,” released June 1, 2011.)

The EU continues to receive largely positive ratings, especially among the EU members states included in the survey. Solid majorities in Lithuania (78%), Poland (74%), Spain (72%), Germany (66%), and France (63%) have a positive opinion of the organization, while enthusiasm is somewhat more muted in Britain (51% favorable, 41% unfavorable).

A slim majority (55%) of Americans express a positive view of the EU, while 22% express an unfavorable view and 23% offer no opinion. The organization gets its highest ratings among independents (63% favorable), followed by Democrats (55%) and Republicans (46%).

While its ratings are still generally positive, the overall image of the EU has declined somewhat over the last year, with favorable ratings dropping in 13 of the 20 countries where trends from 2010 are available. The decline has been especially notable in China (-15 percentage points), Indonesia (-13), and Kenya (-13).

The organization gets its lowest ratings in parts of the Muslim world. Majorities in the Arab nations of Jordan (71%), the Palestinian territories (63%), and Egypt (62%) express a negative view of the EU.

And in Turkey, 64% say they have an unfavorable opinion of the organization. As negotiations regarding Turkey’s ascension into the EU have stalled in recent years, Turks have become less enthusiastic about eventual EU membership. A slim majority (52%) still wants their country to become a member, but support is down considerably from 2005, when roughly two-thirds (68%) held this view. (For more on Turkish views regarding the EU, see “On Eve of Elections, a More Upbeat Mood in Turkey,” released June 7, 2011.) 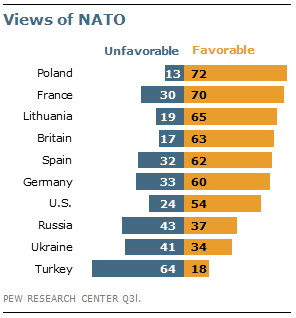 There is one clear exception to this pattern, however. In Turkey – the only predominantly Muslim country in the military alliance – only 18% have a positive opinion of NATO, while 64% give a negative assessment.

In the two non-member states where this question was asked –the former Soviet republics Russia and Ukraine – opinions about NATO are on balance negative. Only 37% of Russians and 34% of Ukrainians give it a positive rating. 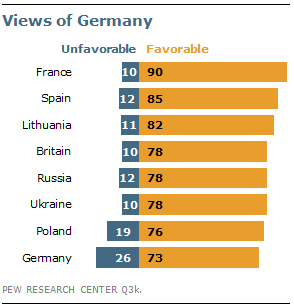 Germany gets similarly high ratings in Russia and Ukraine (78% favorable in both countries).

Germans themselves are actually a little less likely to see their country in a favorable light – 73% express a positive opinion.

Opinions about Germany have basically held steady over the last year, although favorable ratings are up by seven percentage points in Spain and six points in Britain. 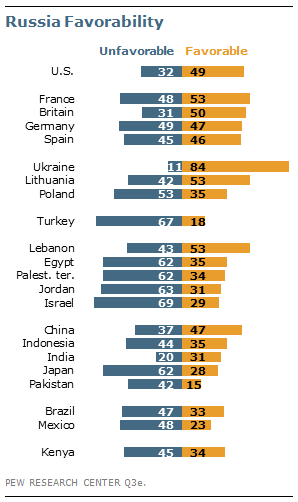 Majorities or pluralities express a favorable view of Russia in 8 of 22 countries. By far, Russia receives its most positive reviews in Ukraine (84% favorable), including favorable ratings from both ethnic Russians (94%) and ethnic Ukrainians (82%).

In the other former Soviet republic surveyed, Lithuania, a much smaller majority (53%) assigns a positive rating. And in Poland, a former Eastern bloc nation, just 35% have a positive view, down from 45% last year.

Among Western European nations, opinions are fairly evenly divided in France, Germany and Spain, while the British are on balance positive (50% favorable, 31% unfavorable).

Americans are also on balance favorably disposed toward Russia, with 49% offering a positive view and 32% a negative one.

Attitudes toward Russia tend to be negative in the predominantly Muslim nations surveyed, especially in Jordan, the Palestinian territories, and Egypt, where more than six-in-ten have an unfavorable view. The exception to this pattern is Lebanon – a slim 53%-majority of Lebanese say they have a positive opinion of Russia.

Israelis offer the most negative assessments of Russia among the nations surveyed – just 29% have a favorable opinion, while roughly seven-in-ten (69%) express an unfavorable view of Russia.

Ratings are also generally negative in Japan (28% favorable, 62% unfavorable). In neighboring China, however, a 47%-plurality holds a positive view of Russia.