China’s overall image is positive in most of the nations surveyed, with European views, in particular, improving over the past year. In Asia, opinion is mixed: majorities in Pakistan and Indonesia are favorably inclined toward China, while Indians tend to be uncertain about the region’s other growing economic powerhouse, and a majority of Japanese have a negative opinion of their neighbor to the west. Opinion of Chinese President Hu Jintao varies similarly among Asian publics.

Inside and outside Asia, however, reservations about China’s growing power persist, especially with regard to China’s military prowess. In most countries, majorities or pluralities view China’s increasing military might as a bad thing for their country. Fewer publics appear troubled by China’s economic growth. The prevailing view in more than half the surveyed nations is that China’s expanding economy benefits their own country. 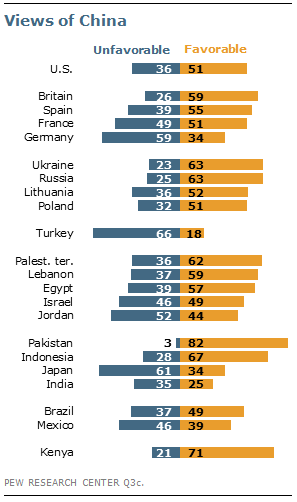 In 16 of 22 nations, majorities or pluralities have a very or somewhat positive opinion of China. In only four countries do majorities express negative views of this emerging Asian power. European publics, in particular, are more favorably inclined toward China than they were last year.

Currently, half or more in Britain (59%), Spain (55%) and France (51%) view China favorably. Similar assessments prevail across Eastern Europe, where the percentage holding a positive opinion of China ranges from 51% in Poland to 63% each in Russia and Ukraine. American attitudes toward China, too, lean toward the positive, with roughly half (51%) expressing a favorable opinion of this Asian giant.

Within Europe, Germans stand out for their predominantly negative views of China. Only about a third (34%) have a favorable opinion of China, compared with nearly six-in-ten (59%) who hold an unfavorable view. 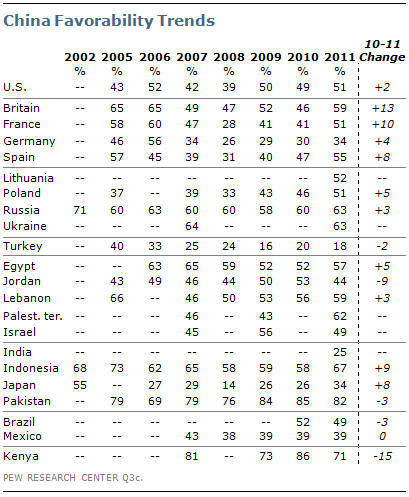 In the Middle East, majorities in the Palestinian territories (62%), Lebanon (59%) and Egypt (57%) express positive views of China. Israelis, meanwhile, are divided (49% favorable, 46% unfavorable). In the region, only Jordanians are mostly skeptical, with 52% expressing an unfavorable opinion of China.

Further east, 82% of Pakistanis have a favorable opinion of their neighbor, likely reflecting the fact that an overwhelming number of people in Pakistan (87%) see China as a partner, rather than an enemy. (For more on Pakistani views of China and the U.S., see “U.S. Image in Pakistan Falls No Further Following bin Laden Killing,” released June 21, 2011.)

Elsewhere in Asia, assessments of China are mixed. While a majority (67%) of Indonesians are favorably inclined toward China, a nearly equal number of Japanese (61%) take a dim view of their regional rival. Indians tend to be wary of China (25% favorable vs. 35% unfavorable), although a large percentage (40%) do not offer a definite opinion.

Notably, opinion of China has improved over the past year, not only in Indonesia (+9 percentage points) but in Japan as well (+8 points). The latter increase is likely due to China offering aid to victims of the earthquake and tsunami that struck the northeast coast of Japan in March. (For more on Japanese views of the effect of the March 11 earthquake and tsunami, see “Japanese Resilient, but See Economic Challenges Ahead,” released June 1, 2011.)

Among the Asian publics asked, the image of China’s President Hu Jintao varies greatly. In keeping with their positive overall view of China, Pakistanis express the greatest trust in Hu, with six-in-ten saying they have at least some confidence in the Chinese leader to do the right thing regarding world affairs. Indonesians, meanwhile are ambivalent: Roughly four-in-ten (38%) say they have confidence in Hu, while just slightly fewer say they either lack confidence in him (30%) or are unsure (31%).

In Japan, just a quarter trust Hu to do the right thing in world affairs, while two-thirds lack confidence in the Chinese president. Among Indians, only 13% have confidence in Hu, compared with 26% who lack confidence, and fully 62% who do not know.

Even in countries where overall opinions of China are favorable, many people express reservations about China’s growing military prowess. In only three of 21 countries do majorities believe a militarily more powerful China is a good thing for their country. By contrast, concern about China’s expanding economic reach is less widespread, with half or more in most nations describing a growing Chinese economy as beneficial to their country. 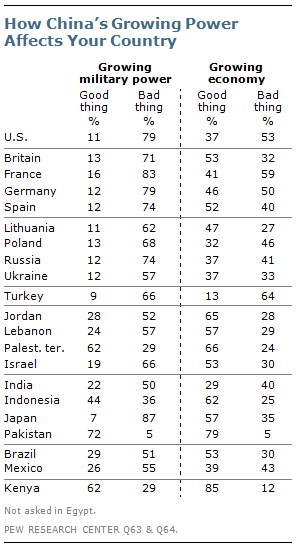 The prospect of the Chinese government modernizing and strengthening its military forces is unwelcome in most regions of the world. In Western Europe, publics are in strong agreement on this point. Upward of seven-in-ten in France (83%), Germany (79%), Spain (74%) and Britain (71%) believe China’s growing military might is a negative development. A large majority of Americans (79%), too, fail to see an upside to a more powerful Chinese military.

Meanwhile across Eastern Europe, majorities ranging from 57% in Ukraine to 74% in Russia describe an increasingly potent Chinese military as bad for their country. And in Turkey, nearly two-thirds (66%) react negatively to China’s increasing military prowess.

Across these countries, reactions toward China’s growing military power have held fairly steady since last year, although the number describing this as a bad thing has increased in Turkey (+8 percentage points), Spain (+8 points) and Germany (+7 points).

In the Middle East, publics tend to see China’s growing military might as a bad thing, including 66% of Israelis, 57% of Lebanese and 52% of Jordanians. A majority of Palestinians (62%), however, consider a more militarily powerful China to be a positive development. In Africa, an identical percentage of Kenyans (62%) agree with this assessment.

In Latin America, both the Mexican and Brazilian publics tend to see an expanding Chinese military as a bad thing. In Mexico, 55% hold this view, up 9 percentage points from last year; in Brazil, 51% see it as a negative, up 11 points from a year ago.

In contrast to views of China’s military power, reactions to the country’s expanding economic influence are generally more favorable. Kenyans are the most upbeat, with 85% believing China’s growing economic might is a good thing for their country. In Asia, majorities in Pakistan (79%), Indonesia (62%) and even Japan (57%) agree. Only Indians appear skeptical: just 29% say China’s increasing economic reach is a good thing for their country, while 40% say it is a bad thing and about a third (32%) offer no definite opinion. 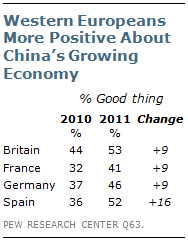 Sentiment among the Middle Eastern publics surveyed also tends to be positive. At least half in the Palestinian territories (66%), Jordan (65%), Lebanon (57%) and Israel (53%) believe an expanding Chinese economy is beneficial to their country.

With the exception of Britain and Spain, where slight majorities (53% and 52%, respectively) welcome China’s rising economic influence, Europeans tend to be circumspect about a more powerful Chinese economy. Just under half in Lithuania (47%) and Germany (46%) see an upside to China’s growing economic power, while roughly four-in-ten or fewer in France (41%), Russia (37%), Ukraine (37%) or Poland (32%) concur.

Compared with a year ago, however, Western European publics are considerably more optimistic about the benefits of an expanding Chinese economy. In Britain, France and Germany, the number who see China’s economic growth as a positive is up 9 percentage points in each country. Meanwhile, an even more dramatic shift has occurred in Spain, where the percentage saying China’s growing economy is a good thing has increased from 36% to 52% since 2010.

In the Western Hemisphere, less than half of Mexicans (39%) and Americans (37%) see a growing Chinese economy as a positive. More Brazilians (53%) believe their country benefits from China’s development as an economic power. Notably, in all three countries the percentage who say China’s expanding economy is a bad thing has ticked up – 9 percentage points each in Mexico and Brazil, and 6 points in the U.S.

Across the nations surveyed, Turks are the most skeptical about the impact of China’s growing economy – just 13% say this is a good thing, down slightly from last year.