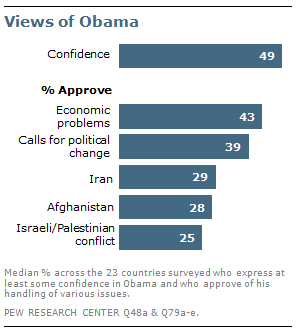 U.S. President Barack Obama remains popular in most parts of the world, and this is especially true in Western Europe, where large majorities express at least some confidence in the American president to do the right thing in world affairs. More than half in Lithuania, Poland, Japan, Brazil, Indonesia and Kenya also give Obama high marks. Publics in predominantly Muslim nations, however, continue to offer negative ratings of Obama, although Indonesia is a major exception.

As has been the case since he took office, opinions of how Obama handles specific international policies lag overall confidence in the U.S. president. In particular, Obama receives low marks for his handling of the situation in Afghanistan, Iran, and the conflict between Israelis and Palestinians. Assessments of the way Obama has dealt with the recent calls for political change in the Middle East and global economic problems are somewhat more positive.

It is of note that Obama gets better grades for dealing with the global economy in most nations surveyed than he does in the U.S. And the American president has managed to create a consensus between Israelis and Palestinians. Solid majorities among both publics disapprove of how he is dealing with their conflict.

President Obama receives some of his most positive ratings in Western Europe. Nearly nine-in-ten (88%) Germans say they have at least some confidence in the U.S. president to do the right thing in world affairs, as do 84% in France, 75% in Britain and 67% in Spain. By comparison, 61% of Americans have confidence in Obama. 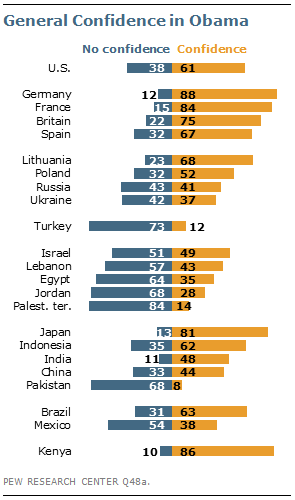 With the exception of Indonesians, publics in predominantly Muslim countries give Obama decidedly negative ratings. Just 8% in Pakistan, 12% in Turkey and 14% in the Palestinian territories have confidence in the American president to do the right thing in international affairs; 28% in Jordan and 35% in Egypt share this view. Opinions of Obama are somewhat more positive in Lebanon, where 43% express at least some confidence, but a majority (57%) in that country say they have little or no confidence in him. (For a more detailed analysis of views of Obama in predominantly Muslim countries, see “Arab Spring Fails to Improve U.S. Image,” released May 17, 2011.)

Mexicans also give Obama negative ratings; 38% have confidence in him when it comes to world affairs, while 54% say they have little or no confidence in the U.S. president. In 2010, Mexicans were evenly split, with 43% expressing confidence in Obama and the same percentage saying they lacked confidence in him. 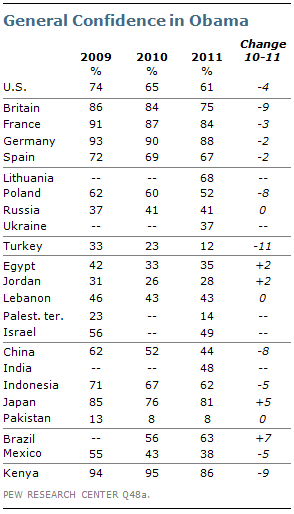 Obama has dropped 9 and 7 percentage points, respectively, since 2009, when Palestinians and Israelis were last included in the Pew Global Attitudes survey 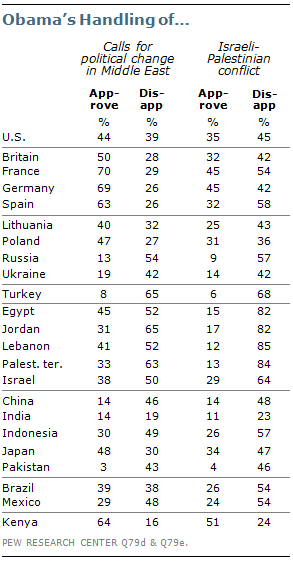 Obama receives relatively positive ratings for his handling of the recent calls for political change in countries such as Egypt, Tunisia, Bahrain and Libya.2 Majorities or pluralities in 10 of the 23 countries surveyed approve of the way Obama has dealt with the uprisings, including about seven-in-ten in France (70%) and Germany (69%) and at least six-in-ten in Kenya (64%) and Spain (63%).

Views of Obama’s handling of the recent protests in the Middle East are most negative in the Muslim countries surveyed, where majorities or pluralities are critical of his performance. Still, many in these countries approve of the way Obama has handled the uprisings. This is especially the case in Egypt and Lebanon; 45% of Egyptians and 41% of Lebanese approve of Obama’s handling of calls for political change, while 52% in each country disapprove.

In contrast, Obama receives some of his most negative ratings for his handling of the Israeli-Palestinian conflict. Only in Kenya do more than half (51%) approve of Obama’s performance on this issue.

In Spain and France, majorities disapprove of Obama’s performance on this issue (58% and 54%, respectively), as does a plurality (42%) in Britain. Germans are nearly evenly divided; 45% approve and 42% disapprove of his handling of the Israeli-Palestinian conflict. Disapproval of Obama’s performance has increased since last year in France, Spain, and Britain; 47%, 45% and 34%, respectively, gave the American president low marks for his handling of the conflict in 2010.

Palestinians are more critical than Israelis, but majorities among both publics (84% and 64%, respectively) disapprove of the way Obama is dealing with the Israeli-Palestinian conflict. Elsewhere in the Middle East, at least eight-in-ten in Lebanon (85%), Jordan (82%) and Egypt (82%) disapprove of Obama’s handling of this issue.

Criticism of Iran and Afghanistan Policies 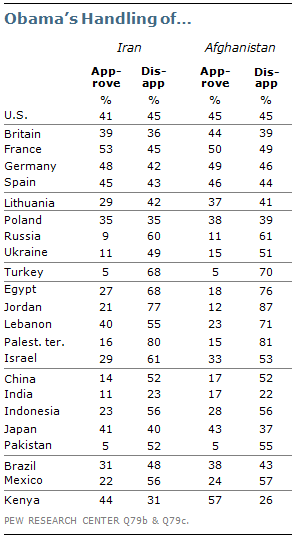 Opinions of the way Obama is dealing with Iran are largely negative across the world. France, Germany and Kenya are the only countries surveyed where a clear majority or plurality approves of Obama’s handling of Iran (53%, 48% and 44%, respectively).

In the Middle Eastern countries surveyed, majorities are critical of Obama’s handling of Iran. This is especially the case in the Palestinian territories and Jordan, where 80% and 77%, respectively, disapprove; 68% in Egypt and Turkey, 61% in Israel and 55% in Lebanon share this view.

Majorities in the other two predominantly Muslim countries surveyed, Indonesia and

Approval of Obama’s handling of Iran has declined over the past year in 7 of 18 countries for which trends are available. This is particularly the case in Kenya, Indonesia, Poland, and Russia, where the percentage approving of the president’s performance on this issue is down by double digits (14 percentage points in Kenya and Poland, 13 points in Indonesia and 11 points in Russia).

When asked about Obama’s handling of the situation in Afghanistan, only in Kenya does a majority (57%) give the president high marks.3 Opinions are mixed in the U.S and Western Europe; the same number of Americans approves as disapproves of Obama’s handling of Afghanistan (45% each), and the French (50% approve and 49% disapprove), Germans (49% and 46%) and Spanish (46% and 44%) are also nearly evenly divided. In Britain, somewhat more approve (44%) than disapprove (39%) of the way Obama is dealing with the situation in Afghanistan.

As is the case with other key policies in the Muslim world, views of Obama’s handling of Afghanistan are especially negative in predominantly Muslim countries. Nearly nine-in-ten (87%) Jordanians and at least three-quarters in the Palestinian territories (81%) and Egypt (76%) disapprove of the way Obama is dealing with the situation in Afghanistan; 71% in Lebanon and 70% in Turkey, as well as narrower majorities in Indonesia (56%) and Pakistan (55%) express similar views. 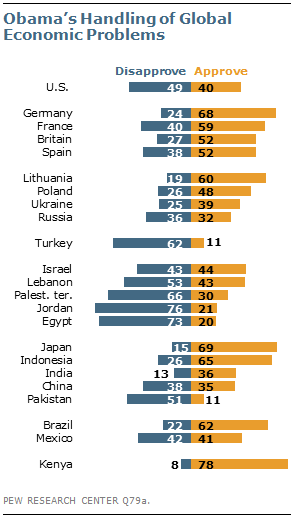 Majorities or pluralities in 12 of 23 countries surveyed approve of the way the U.S. president is dealing with global economic problems. Kenyans are particularly supportive; nearly eight-in-ten (78%) approve of Obama’s handling of the world economy.

In Western Europe, Germans express the most support for Obama’s handling of economic problems; about two-thirds (68%) approve of the president’s performance. Nearly six-in-ten (59%) in France and narrower majorities in Britain and Spain (52% each) share this view.

By comparison, four-in-ten Americans approve and about half (49%) disapprove of the way Obama is dealing with global economic problems.

Six-in-ten Lithuanians offer support for Obama’s handling of global economic problems. About half (48%) in Poland and 39% in Ukraine approve of the way the U.S. president is dealing with this issue; about a quarter in each country (26% and 25%, respectively) disapprove. In contrast, more in Russia disapprove (36%) than approve (32%) of Obama’s performance.

For the most part, publics in the predominantly Muslim countries surveyed are critical of the way Obama is dealing with the world economy. At least seven-in-ten in Jordan (76%) and Egypt (73%) disapprove of Obama’s performance, as do 66% in the Palestinian territories, 62% in Turkey, 53% in Lebanon and 51% in Pakistan. Only in Indonesia does a majority (65%) approve of Obama’s handling of global economic problems; 26% of Indonesians disapprove.

Views of Obama’s performance on the global economy are mixed in Israel, Mexico and China. In Israel, 44% approve and 43% disapprove of the way Obama is handling this issue. About four-in-ten (41%) Mexicans give Obama high marks for his handling of global economic problems, while about the same number (42%) are critical of the president. And in China, 35% approve and 38% disapprove. In contrast, 69% in Japan and 62% in Brazil approve of the way Obama is dealing with economic problems, as do 36% in India; 13% of Indians disapprove and 51% do not offer an opinion.

Next: Chapter 4. Views of China
← Prev Page
Page1Page2Page3You are reading page4Page5Page6Page7Page8Page9Page10
Next Page →