In most parts of the world, publics continue to express more confidence in U.S. President Barack Obama than in key European leaders tested in the survey. As in previous surveys, German Chancellor Angela Merkel is popular in European countries, but not well-known in the rest of the world. French President Nicolas Sarkozy and Russian President Dmitri Medvedev are generally less popular than Merkel in Western Europe, but also virtually unknown in many other countries surveyed. Meanwhile, Saudi King Abdullah is well-regarded in most of the predominantly Muslim nations surveyed, and Indian Prime Minister Manmohan Singh is valued for his foreign policy leadership in India, but inspires far less confidence in neighboring China and Pakistan. 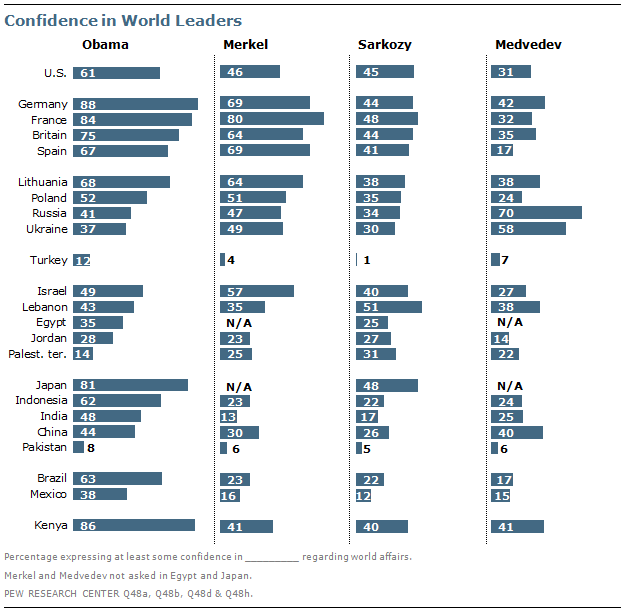 Majorities in all six European Union member states polled have confidence in German Chancellor Angela Merkel to do the right thing regarding world affairs. Overall, majorities or pluralities in 11 of the 21 countries where the question was asked express at least some confidence in the German leader.

Confidence in Merkel is highest in France where, as was the case last year, she is even more popular than she is at home. She is also more popular in France than French President Sarkozy. Eight-in-ten French express at least some confidence in the German chancellor to do the right thing in international affairs.

Support for Merkel is also high in her home country and in Spain (69% each). This represents a significant increase in Spanish support for the German leader, up 12 percentage points since 2010. In Britain, 64% voice confidence in Merkel, up from six-in-ten in 2010 and roughly half (51%) in 2009.

Opinions of Merkel are also positive in Lithuania, where over six-in-ten (64%) have a favorable view. In Poland, a slim majority (51%) have at least some confidence in the chancellor, down from the 58% voicing such support in 2010.

Outside of Europe, Merkel maintains her strongest support in Israel, where a 57%-majority expresses a lot or some confidence in her to do the right thing regarding world affairs. This contrasts with 2009, when Israeli views of Merkel were divided (48% confident vs. 48% not confident).

Elsewhere in the Middle East, negative views of Chancellor Merkel are more pervasive, with majorities in the Palestinian territories (71%), Jordan (67%), and Lebanon (60%) having not much or no confidence in the German leader to do the right thing in world affairs. Merkel is even more unpopular in Turkey, where more than three-quarters (77%) voice little or no confidence in her.

Elsewhere, many offer no opinion about Merkel. Pluralities in India (66%), Pakistan (59%) and Indonesia (41%) said they could not assess her ability to handle world affairs.

Among the EU nations surveyed, President Sarkozy garners the most confidence in his home country. Nevertheless, opinions are closely divided – about half (48%) have confidence in their leader when it comes to doing the right thing in global affairs, while 52% express not much or no confidence. Around four-in-ten in Britain (44%), Germany (44%), Spain (41%) and Lithuania (38%) express confidence in President Sarkozy regarding international affairs. In Poland, only 35% have confidence, a striking 17 percentage point decline from the 52%-majority saying the same in 2010.

Pluralities in Japan (48%), the U.S. (45%), and Kenya (40%) have confidence in the French leader. Japanese opinion of President Sarkozy is up sharply (+11 percentage points) from 2010 when less than four-in-ten (37%) had at least some confidence in France’s president.

As was the case in previous surveys, a majority of Lebanese have confidence in Sarkozy, albeit a slim one (51%). Elsewhere in the Middle East, negative views of the French president are more prevalent. Majorities in Egypt (71%), Jordan (70%), the Palestinian territories (67%), and Israel (55%) have not much or no confidence in Sarkozy when it comes to global affairs.

As in previous years, hardly any Turks (1%) express confidence in the French president, with eight-in-ten voicing little or no confidence in him.

Confidence in Russian President Dmitri Medvedev to do the right thing in world affairs is relatively low across the countries surveyed, with the exceptions of his home country and neighboring Ukraine. Seven-in-ten Russians have confidence in their president, while 58% of Ukrainians have a lot or some confidence in the Russian president regarding international affairs.

Meanwhile, Russian views toward Prime Minister (and former president) Vladimir Putin are also largely positive: three-quarters have at least some confidence in Putin to do the right thing regarding world affairs; just 19% lack confidence in their prime minister.

Similarly negative views of Medvedev are widespread across the Middle East, with significant majorities in Jordan (76%), the Palestinian territories (75%), Israel (69%), and Lebanon (58%) lacking confidence in the Russian leader.

Turks have consistently expressed little confidence in President Medvedev, with fewer than one-in-ten (7%) currently saying they have a lot or some confidence in the Russian president to do the right thing in the world.

In Russia’s largest neighbor, China, a slim plurality (40%) expresses confidence in the Russian president, with about three-in-ten having little or no confidence (31%) or not offering an opinion (29%). Elsewhere in Asia, many in India (61%) and Pakistan (50%) do not express an opinion of Medvedev.

In Latin America, opinion of the Russian leader is negative, with nearly six-in-ten Brazilians (57%) and half of Mexicans saying they lack confidence in Medvedev. 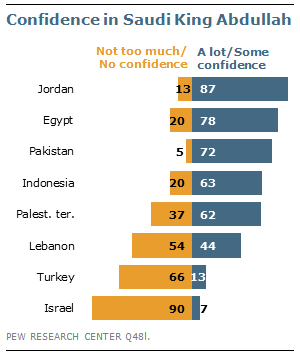 Majorities in five of the seven predominantly Muslim publics surveyed have at least some confidence in Saudi King Abdullah to do the right thing regarding international affairs. Over six-in ten in Jordan (87%), Egypt (78%), Pakistan (72%), Indonesia (63%) and the Palestinian territories (62%) have a lot or some confidence in the Saudi leader.

Views are more mixed in Lebanon, with 44% expressing confidence in the Saudi king and 54% saying they have not too much or no confidence. However, opinions about King

Abdullah, a Sunni Muslim ruling predominantly Sunni Saudi Arabia, split sharply along religious and sectarian lines. Only 23% of Lebanese Shia Muslims have confidence in him, while more than six-in-ten Sunni Muslims (61%) voice confidence in the Saudi leader to do the right thing regarding international affairs. Lebanese Christians are almost evenly divided; 48% express confidence, while 51% lack confidence. 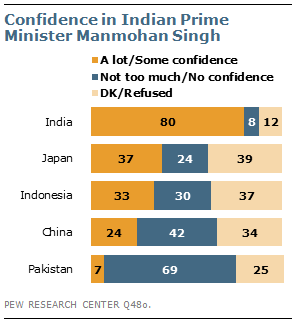 However, views of Singh are negative in neighboring Pakistan and China, where 69% and 42% respectively express a lack of confidence in the Indian Prime Minister.

Outside of mainland Asia, nearly four-in-ten in Japan (39%) and Indonesia (37%) do not offer an opinion of the Indian leader.